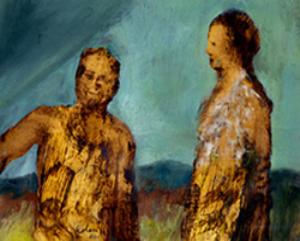 In Summer 2010, the Gifts and Bequests Sub-Committee of The Art Fund (formerly National Art Collections Fund) allocated Sir Sidney Nolan’s paintings Greek Figures (1957) and Burke on Camel in a Landscape (1950s) to the School of Art Museum at Aberystwyth University.

The gift is both timely and apposite. Dr Simon Pierse, Lecturer in Fine Art at the School of Art, has published internationally on British and Australian post-war art and recently initiated the Australian Artists in Britain. His articles on Sidney Nolan and Sir Kenneth Clark, the 1961 Whitechapel Art Gallery exhibition Recent Australian Painting, paintings of Uluru by Michael Andrews and Lloyd Rees, and Antony Gormley’s Inside Australia installation, have appeared in Art & Australia, the Melbourne Art Journal, and Australian Studies.  Antipodean Summer, his book on exhibitions of Australian art in London 1950-65 is due for publication in 2011 and will coincide with a major exhibition of Australian prints and drawings at the British Museum, London.

Ann Forsdyke (1913-2007) bequeathed her collection to the Art Fund in 2007.  Forsdyke worked at London’s Whitechapel Art Gallery during one of the most vibrant periods in its history, at Apollo magazine, and at the British Museum. The Bequest contains several works by major Australian artists as well as other international and British artists supported by the Whitechapel during the late 1950s and early 1960s. In addition to several works by Nolan, Forsdyke’s collection includes works by Henry Moore, Robert Colquhoun, Ceri Richards and Prunella Clough, as well as Arthur Boyd and Roy de Maistre, two other important Australian artists who worked in the UK.

At the Whitechapel in the late 1950s, Forsdyke assisted then director Bryan Robertson (1925-2002), who was influential in bringing the avant-garde, post-war generation of Australian painters to a British audience. He mounted the landmark exhibition Recent Australian Painting in 1961. During this period she came into contact with many contemporary artists and gallery owners. The collection that Forsdyke built up with her husband Douglas reflects the contacts she made. Many of the artworks were acquired directly from the artists and include some major works by Australian painters. Arthur Boyd’s Bride Drinking from a Creek (1960), valued at £250,000, has now entered Tate Britain where, as the first Boyd painting in their collection, it finally bridges a gap that was left unfilled for decades.

In the late 1960s, Ann Forsdyke worked as personal assistant to Sidney Nolan (1917-1992) who lived and worked in Putney. Nolan spent a period on the Greek island of Hydra between 1955-56 and produced a number of Greek-inspired works. Greek Figures was painted in June 1957 and is inscribed as a gift to Forsdyke from the artist. Nolan found parallels between the light and landscape of Mediterranean Greece and central Australia but also painted Greek myths in London, such as his Leda and the Swan series (1958-60), inspired by his Thameside home. Burke on Camel in a Landscape probably dates to around the mid-1950s and is one of a great many paintings that Nolan did of the ill-fated Burke and Wills trans-Australia expedition of 1860-1. Both works are characteristic examples of Nolan’s free use of history, myth and legend to give resonance to landscape.

The Forsdyke Bequest has been allocated to public collections across the UK: The British Museum; Tate Britain; Whitworth Art Gallery, Manchester; Ashmolean Museum, Oxford; Fitzwilliam Museum, Cambridge; Leeds City Art Gallery; Portsmouth City Museum; and Graves Gallery, Sheffield.  Like all our art works, the Nolan paintings will be displayed periodically in thematic exhibitions drawn from the School of Art Collection.