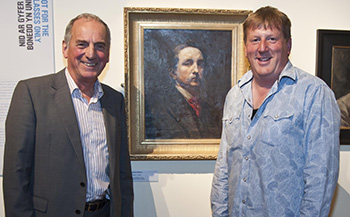 Robert Meyrick, Head of the School of Art, has researched and curated the biggest ever exhibition of the work of Maesteg artist Christopher Williams this summer. The exhibition was opened by former Labour MP and Government Minister Kim Howells (pictured with Robert Meyrick) at the National Library of Wales on Saturday 14 July.

Christopher Williams came to the fore on a tide of growing interest in the history, culture, and ancient folklore of Wales. He exhibited regularly with the Royal Society of British Artists, Royal Society of Portrait Painters and at the Royal Academy. Initially a painter of classical and biblical subjects such as the doomed romance of Paulo and Francesca and the Remorse of King Saul, the London-based Welshman turned his attention to the world of the Mabinogion: the enchantress Ceridwen at her cauldron; Branwen, sister of the King of Britain and wife to his enemy, the King of Ireland, wistfully looking out to sea; and Blodeuwedd, the maiden fashioned by the magician Gwydion from blossoms of the oak, broom and meadowsweet.

Such mythological scenes aside, Williams built a reputation as a portraitist of Welsh statesmen and academics, men of letters and of the cloth. In 1911, when Williams began work on his modern day nationalist allegory The Re-Awakening of the National Spirit of Wales, Prime Minister David Lloyd George sat for the first of three portraits by the artist. That same year, Williams was commissioned by King George V to paint The Investiture of Edward, Prince of Wales at Caernarfon Castle. 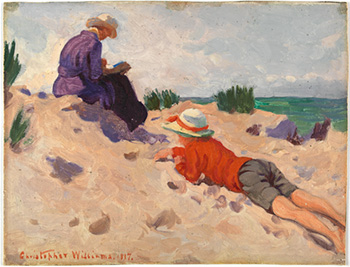 Serving on institutional committees and adjudicating exhibitions, Williams did much to stimulate an interest in the visual arts in Wales. In his first public address at the Llangollen National Eisteddfod in 1908, he criticised the lack of facilities for art students in Wales, urging politicians and wealthy mine owners to help provide ‘art for the masses, not for the classes only.’

Williams frequently ventured out to the continent and beyond to paint the landscape and iconic buildings such as the Alhambra at Granada or the Santa Maria della Salute in Venice. Yet, as captivated as he was by the souks of Tangiers, Williams kept coming back to the Welsh coast, whose light and atmosphere he captured in a great number of spontaneous, experimental sketches he executed en plein air while traveling between Llangrannog and the Lleyn Peninsula. Never intended for public display, these studies attest to an artist’s abiding fascination with the Welsh landscape and his quest for a Welsh identity. 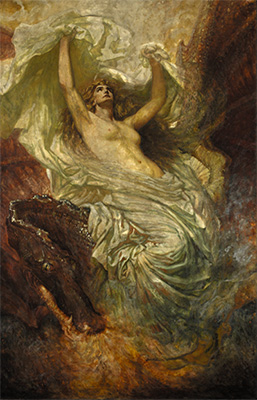 When Williams died in 1934, his widow Emily donated many of his major canvases to Welsh institutions.  The ambitious scale of his figure compositions meant that they required display in large galleries or public places. By then, however, scenes intended for public enlightenment or uplift had fallen out of fashion. Until this day, most of them have remained hidden in museum vaults, rarely to see the light of day.

The present exhibition is the largest ever to showcase the artist’s impressive body of work. Drawing from previously untapped archives and private collections, it provides new insights into the life and career of one of Wales’ foremost early 20th-century painters. It raises a question that anyone looking at the works of Christopher Williams will have: why, despite his professional associations and the support from leading figures in politics and the academia, a painter whom Lloyd George described as ‘one of the most gifted artists Wales has produced’ could have been forgotten so soon and for quite so long.

The exhibition continues until 22 September 2012.