Computer Science is not just work, it’s fun too!

Computer Science staff and students also regularly engage in a wide variety of projects and make interesting things, here we have collected some of our fun projects and demos.

A society for students with an interest in Computer Science: AberCompSoc

There are lots of other student societies you might be interested in, take a look at the SU Societies List to see what’s already going on.

A club for undergraduates and 11-18 year olds to learn about robotics and to work on their own robotics projects: https://aberrobotics.club 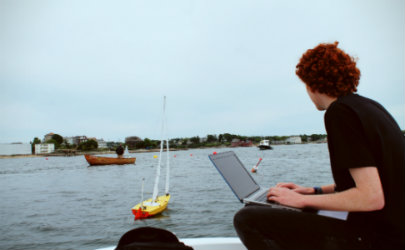 Since October 2012, the Aber Sailbot team have been working hard to create an autonomous boat that requires no absolutely human contact to function. The team has entered numerous competitions and maintains several different sailbots which they use to compete, all over the world.

Our local branch of the BCS – the Chartered Institute for IT - regularly run interesting talks and events for a variety of topics around computing. You can find oout more about the branch and events on their webpage: https://midwales.bcs.org

For our Applied Graphics module, students make a short film on a given topic, here are a selection:

In some of our modules, students have the opportunity to make web games using HTML5 and JavaScript; you can play some of them on this Student Showcase.

As part of the Dan and Phil show on BBC Radio 1, listeners were invited to send in videos of themselves dancing along to the latest top hits. Not to be beaten, the iCub team wanted to get involved in the action, so put together this video of the iCub showing off some of his moves along to a track by The Artic Monkeys, "I bet that you look good on the dance floor".  Watch closely to see the actions follow the lyrics.  The video was featured on their youtube channel and Dr James Law was interviewed as part of the programme.

While the actions in this video were scripted, it set us thinking about how we could teach the robot to dance, and it paved the way for more fun projects in the future.

Lecturer Jim Finnis has some wonderful projects on his user pages, including his own programming language, some generative music, and some Arduino-powered musical instruments!

At recent Christmas lectures at the Royal Institution, Computer Science’s Dave Price was invited to collaborate in creating a robotic orchestra which performed live on BBC 4, on New Year’s Eve.  Many universities contributed to the project, among Aberystwyth’s contributions were parts taken from a printer, a vacuum cleaner and church organ pipes. 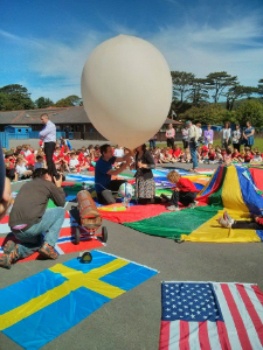 Using a helium-filled weather balloon, the pupils launched a polystyrene space capsule fitted with two cameras, two GPS trackers and a small homemade computer that measures altitude, temperature and the motion of the balloon and transmits the information back to earth via a wireless link.

or on Mark's personal blog.

Dr Fred Labrosse from the Department of Computer Science talks about how one of his robots Idris can navigate autonomously in the Welsh uplands.

A demonstration of how different algorithms organize the information when sorting. It shows an image whose pixels were randomized, and using their original indices, they are being sorted by different algorithms. Notice that we are not comparing speed, just how they move elements around – if it compared speed, merge sort would have finished faster.

This is a recording of a couple of talks with discussion that took place online as part of Aberystwyth Robotics Week 2020. The talks are on the theme of Bio-inspired robotics.

The first talk is given by Dr Myra Wilson introducing what bio-inspired robotics means along with some examples before talking about the Bee inspired work for coordinating UAVs to maintain an ad-hoc wireless network.

The second talk is given by Dr Patricia Shaw talking about how we can take inspiration from the way in which children learn. This is modelled on a robot developing mechanisms for enabling playful learning to take place that can build new skills and gain understanding about the world around it.

The Intelligent Robotics research group have a YouTube channel containing many interesting videos of research and outreach activities involving robots.

Dr Rachel Rahman from the Department of Psychology describes a project between Psychology and Computer Science.

Dr Colin Sauze talks about his work with robotic sailing boats, from boats built for Aber Sailbot competitions to boats for mapping glaciers.