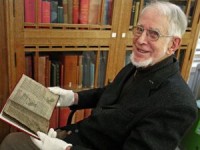 On 6 May 2012, Professor Dafydd Jenkins passed away, aged 101.  Dafydd’s death brings to an end the life of one of Wales’ most gifted individuals in the twentieth century.  He was born in London (forebodingly perhaps) on St David’s Day in 1911, the son of parents whose roots were in Ceredigion.  He was brought up in the London Welsh non-conformist tradition – his father was Secretary of Jewin Chapel.  He was educated at Merchant Taylors’ School before gaining a scholarship to read the sciences at Sidney Sussex College, where he switched to Law for the second part of his degree.  He was called to the Bar in 1934.

While at school, he met Aneirin Talfan Davies who was a pharmacist in London.  They became great friends and, mainly under Aneirin’s influence, Dafydd became a socialist Anglican, a man of letters and a Welsh-language publisher (the anecdotes about compiling the first editions of Heddiw have become legendary), and a nationalist.  Therefore, when the time came for him to practice as a barrister, he left the ‘Capital City’ and joined the South Wales Legal Circuit, moving to live in Carmarthen.  He also joined Plaid Cymru and his report on the case of the ‘Bombing School’ in Tân yn Llŷn brought Dafydd to prominence.  During this period, he met his future wife, Miss Gwyneth Owen, a librarian who worked at the National Library and they had one son, Rhys, who now works as an Economics Professor in Norwich.  Gwyneth passed away in 1962.

He ceased practicing as a barrister and, in 1938, he became organiser of the Welsh Language Petition, calling for the official use of the Welsh language in the Courts of Law.  He was a committed pacifist and a conscientious objector.  During the Second World War, he farmed at Trawsnant Isaf in Ceredigion.  After the war, Dafydd left the farm and went to work for WAOS, organising farming co-operatives in Wales.  This brought him into contact with Scandinavian countries.  He visited Denmark and Sweden – visits, which led to the publication of two travel books: Ar Wib yn Nenmarc and Ar Wib yn Sweden.  In 1965, he became a lecturer at the Department of Law, University College of Wales, Aberystwyth, and from 1975 until his retirement in 1978, he held a personal Chair in Legal History and Welsh Law.

He was a prolific author.  He wrote continuously under numerous pseudo-names, including Myrddin Gardi, while living in Carmarthen.  He won the Literary Medal at the National Eisteddfod for his work on the history of the Welsh novel, Hanes y Nofel Gymraeg, and he composed numerous reports on agriculture, as well as political and historical issues.  However, he is primarily regarded as the major authority on Hywel’s Law.

Hywel’s Law was an obvious area for the young Plaid barrister to become interested in during the thirties.  After all, it is the clearest expression ever of Welsh nationalism.  He began to study the manuscripts to get to the essence of the text.  His redaction of Llyfr Colan remains a masterpiece, because of the detailed discussion of the manuscript itself, but above all, because we had, for the very first time, a lawyer’s analysis of the thinking of Welsh lawyers working seven centuries earlier.  This was followed by a host of articles on various legal issues, as well as his two authoritative classics: his book, Cyfraith Hywel, which summarises the main areas of Hywel’s Law, and his translation: Hywel Dda, the Law.  Both publications make essential reading for anyone interested in indigenous Welsh law.  He was awarded a DLitt from Cambridge for his work.

He organised a legal history conference for the English Legal History Society in Aberystwyth in 1972.  He regularly attended meetings of the Deutsches Historisches Recht on the continent and made many friends – he was exceptionally proud of his linguistic skills – he considered himself to be a linguist manqué.  He was awarded an honorary doctorate from Würzburg University.  When his publication Festschrift, Lawyers and Laymen was published in 1986, there was a greater number of would-be contributors than there was space for their contributions.  He was President of the Hywel Dda Law Seminar for many years and he was an amiable Professor of Law for younger generations.  He continued to publish until the final year of his life.