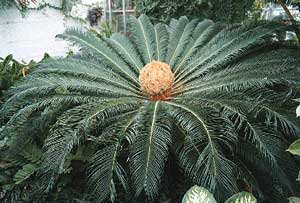 Right: Cycas revoluta represents the most widely distributed cycad genus, with species distributed from Japan through SE Asia to Australia, and from Madagascar through the E coast of Africa.
The cycads are an ancient group of cone-bearing plants (i.e. gymnosperms). Their name derives from the Greek cyckos meaning 'palm-like' and their common names (e.g. bread palm) often suggest this similarity. However, as the true palms (Arecidae) are angiosperms, they are fundamentally different. Again, cycads can be confused with giant ferns because of their pinnately compound leaves, but they are distinct from the spore-bearing ferns (Pteridophyta). The similar appearance may be due to an evolutionary link through the extinct Carboniferous seed ferns (Pteridospermophyta).

The fossil record shows that cycads occurred in the Permian and Triassic (280 to 195 Mya). They reached their maximum abundance during the Jurassic (195 to 141 Mya), and then declined during the Cretaceous (141 to 65 Mya), to be replaced by the newly evolved angiosperms. Today's cycads are therefore relics of a major ancient evolutionary group. Many cycads have conservation ratings, due to habitat destruction and plant collectors.

Cycads are dioecious (separate males and females). They can be distinguished most clearly from ferns or palms by the pollen cones (male) or larger seed cones (female), which are produced at the apex of the stem in most cycads. Many of the cones are extremely large; they can be 70 cm long and weigh 30 kg in the Australian Macrozamia denisonii. The big Cycas revoluta in the Tropical Glasshouse is female - its cone consists of a rosette of sporophylls that slowly open to reveal the ovules during the summer (below left and right).

A male cone (note the white pollen) can be seen on the right on the Southern African cycad Encephalartos bartii and the female cone in the picture below. 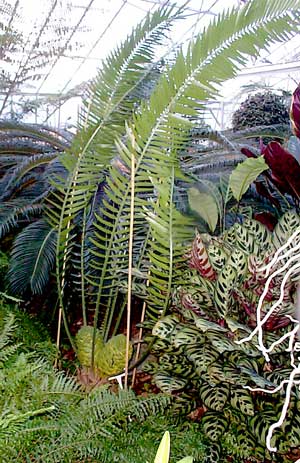