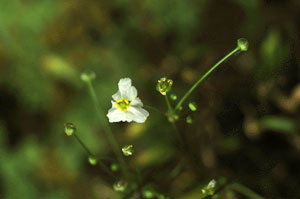 The Alismatidae have a large number of relictual (ie. 'primitive') features, despite many evolutionary adaptations to their aquatic habitats. They may therefore have similarities to the earliest monocots, but it is not suggested that they are actually ancestors of the other present-day monocot subclasses. Monocots are thought to have diverged from dicots in the Cretaceous period, 100-120 Myr ago. All monocots lack the type of secondary growth (ie. wood) found in dicots and therefore it is believed that the monocots evolved from herbaceous dicots. The typical parallel venation of monocot leaves, quite different to the net-like venation of dicot leaves, suggests some significant evolutionary process; it has been suggested that the monocot ancestors were aquatic plants which lost their dicot-type broad leaf blades. When some of their evolutionary descendents adapted to terrestrial habitats, their leaves broadened again, this time by development of the petiole.