A huge and very important subclass, with 15000 species. It contains the family Poaceae with 8000 species: these include not only the grasses of lawns and fields but the world's most important food crops; the cereals (wheat, barley, oats), rice, maize and sugar cane. Rushes and sedges are also in the Commelinidae.

In the Glasshouse pond are several sedge (Cyperus) species (right). These include the papyrus plant.

There are a number of examples in the Glasshouse of the family Commelinaceae, to which belong the familiar spiderwort houseplants: Tradescantia, Zebrina, Commelina and Rhoeo. This is a relictual family of the subclass, with relatively showy insect-pollinated flowers; the more derived families, like the grasses, are wind-pollinated. 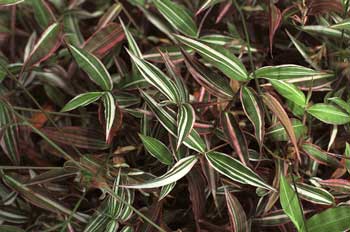