This is a diverse subclass of 25000 species, occupying many habitats and diplaying numerous evolutionary modifications. The more derived Dilleniidae tend to show fusion of floral parts. Well known members of the subclass include tea, chocolate, cotton, pumpkins and melons, heathers, Rhododendron, primroses, violets, lime trees and the insect-catching pitcher-plants and sundews. 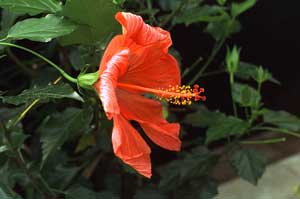 Has about 1500 species, cosmopolitan in distribution but best developed in the tropics. The largest genus is Hibiscus (200+ species). The family includes cotton (Gossypium) and some well known ornamentals such as the garden hollyhock (Alcea rosea).

Right: the fusion of floral parts can be seen in Hibiscus rosa-sinensis.

This family contains 650 species, widespread in tropical and warm temperate regions, but best developed in tropical America and Africa.

Below: the genus Passiflora has 400 species. 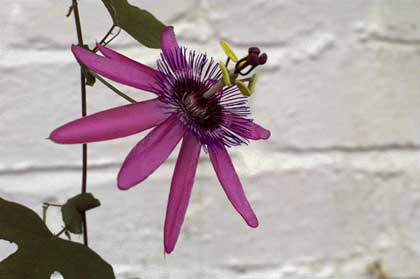 There is collection of insectivorous plants in the Tropical Glasshouse and in the top Glasshouse. The order Nepenthales of the subclass Dilleniidae includes families of the best known insect-catching plants, such as the trumpet pitcher family Sarraceniaceae, the sundew family Droseraceae, and the East Indian pitcher-plant family Nepenthaceae which contains a single genus Nepenthes with 75 species ranging from the East Indies to Madagascar. Right: Nepenthes alata x ampullaria.

This family mostly consists of the large genus Begonia with 1000 species, widespread in tropical regions, best developed in northern South America. Many species and hybrids are cultivated as houseplants and tender garden plants. Below: Begonia rex. 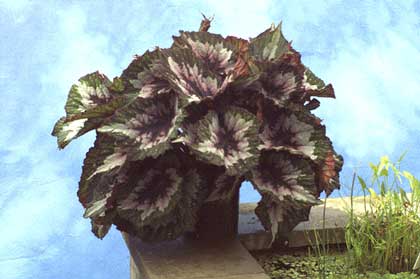