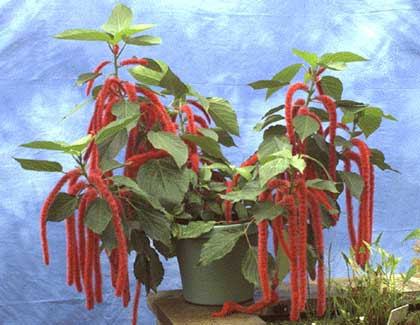 Contains 7500 species of cosmopolitan distribution, but best developed in tropical and subtropical regions. Many members are economically important, including the rubber tree Hevea brasiliensis, of which there is a specimen in the Glasshouse. There is also a collection of African Euphorbiaceae, which are succulents ecologically comparable to cacti.

Right: Acalypha hispida, the chenille plant, has pendulous catkin-like female inflorescences with dense mats of crimson styles. It was first collected in New Guinea in 1896 and is now cultivated all over the tropics.

Below: Acalypha wilksiana variagata. Acalypha is a large genus of the Euphorbiaceae with 400 species; most species are grown for their variegated foliage and have insignificant flowers. 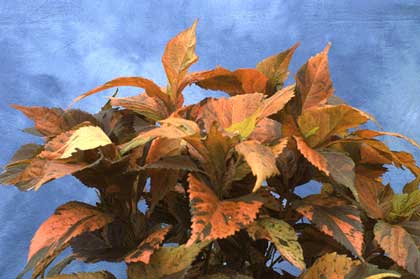 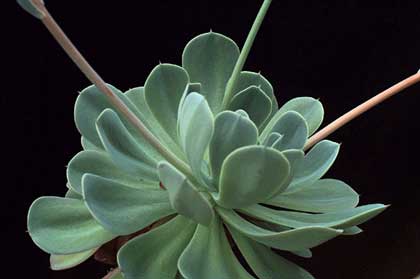 Family of 900 species of succulents, from which is named crassulacean acid metabolism (CAM), an adaptation of CO2-fixation to dry habitats. Cosmopolitan distribution in arid, temperate or warm-temperate regions, but especially diversified in South Africa, Mexico and Asia. More than two-thirds of species belong to the general Sedum, Crassula or Kalanchoe. Right: the fleshy leaves characteristic of this family can be seen on this flowering specimen of Echeveria elegans.