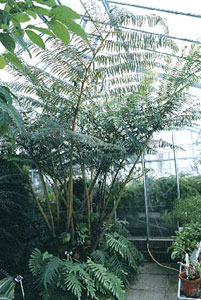 Ferns appear in the Devonian fossil record (359 to 353 Mya) and today there are still over 10000 fern species. The largest fern in the Glasshouse is the Angiopteris evecta (right), a representative of the Marattiaceae family from tropical and subtropical humid forests, mostly in the Western Pacific area. The fossil record of the Marattiaceae extends back to the Carboniferous (345 to 280 Mya). In the fossil genus Psaronius, the trunk reached heights up to 10 m. The stems in modern genera are usually short and partially embedded in the soil. Despite its giant size, the Angiopteris has typical fern characters. The new leaves of Angiopteris are coiled into 'croziers' as in other ferns. The spores are borne on the underside of the leaves in sori that are frequently fused - this is one of the characteristics used to identify extant and fossil members of this family. The cellular development of the sporangia is also different to that of most modern fern families; the technical term is 'eusporangiate'.

In the pond (below) is a small aquatic fern Salvinia auriculata. The genus Salvinia is found mainly in tropical America and Africa, but it does occur in Europe as far north as the Netherlands. Salvinia has leaves in whorls of three. The two boat-shaped leaves float on the water, whilst the third leaf is submerged and finely dissected so that it looks like roots. It belongs to a minority of 'heterosporous' ferns, with different male (micro-) and female (mega-) spores. Fossil megaspores of the Salvinia type in the Upper Cretaceous (100 to 65 Mya) represent the first known occurrence of the genus.