90 years of the Welsh Plant Breeding Station - a perspective

In the Jubilee Report of the Welsh Plant Breeding Station 1919-1969, the then Director, Professor P. T. Thomas, described the context of the foundation of the Station. The grasslands of Britain, with the exception of the so-called fattening pastures, provided only for animal maintenance; production requirements were met from imported concentrates. The recognition of this failing of livestock agriculture led to the WPBS being established as a department of the University College of Wales Aberystwyth, with laboratories in Alexandra Road and experimental plots close to the National Library of Wales on Penglais Hill and at Frongoch Farm. 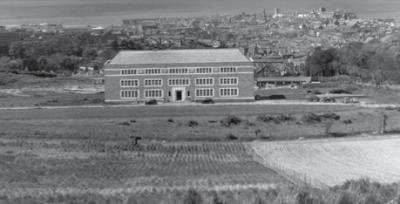 Its birth sprung from the inspiration of Bryner Jones, Professor of Agriculture at Aberystwyth, and the generosity of Lord Milford. As its name indicates, its remit was the breeding of better varieties of grasses, clovers, cereals and other farm crops for Wales. The visionary George Stapledon (later Sir George Stapledon) became its first Director, after indicating to Professor Jones that he would not make a formal application for the post, but would accept it if offered to him! (Waller, 1962; Colyer, 1982) This set a precedent that would be hard to envisage today, in that T. J. Jenkin, Capt. R. D. Williams and E. T. Jones, in charge of Grass Breeding, Clover Breeding and Oat Breeding, respectively, were also appointed without formal applications.

The scientific challenges facing these pioneers were immense. With grass species being cross-pollinated, appropriate methods to breed and maintain pure varieties had to be developed from scratch. Such procedures were subsequently copied all over the world. Stapledon’s own knowledge of UK grasslands was invaluable for the collection of superior genotypes, particularly from productive pastures. A series of S varieties, including S23 and S24 perennial ryegrass, and S22 Italian ryegrass, were released in the early 1930s. All varieties were more leafy and persistent than commercially available types. This is only part of the story, however, as the success of these varieties depended on good quality seed certified to ‘do what it said on the bag’. In his earlier role as Agricultural Botany Adviser in the Agricultural Department of the University College of Wales, Aberystwyth, Stapledon himself had analysed the weed impurities and germination of 900 seed samples and so was well aware of the inherent problems of sowing poor quality seeds. Successful leys also depended on farmers receiving the right information on how to establish and manage their grassland based on agronomic trials. The coupling of agronomy with the disciplines of plant breeding and seed production made the Station a proponent of multi-disciplinary research from the outset.

Among the successful early agronomists were William Davies who, following assignments in New Zealand, Australia and the Falkland Islands, returned to the Welsh Plant Breeding Station as Head of Grassland Agronomy between 1933 and 1940 and succeeded Stapledon in 1945 as director of the Grassland Improvement Station near Stratford-upon-Avon (Williams,1968); Martin Jones, who left the Welsh Plant Breeding Station to join I.C.I. in 1928 and became Professor of Agriculture at the University of Newcastle in 1947, and Iorwerth Jones, Martin Jones’ younger brother, who served the Welsh Plant Breeding Station from 1928 to 1971 (Evans, 1987). During 1929-1933 alone, 848 acres on 231 different farms in Wales were sown to crop trials (Stapledon, 1935), a massive exercise in ‘technology transfer’ as well as scientific endeavour.

In 1955, the Station moved to Plas Gogerddan. Under Professor E. T. Jones (Director, 1950-1958)‌ and Professor P. T. Thomas (Director, 1958-1974), the Station entered a period of expansion, adding disciplines such as plant physiology and cytogenetics to its portfolio. More direct contributions to grass breeding included the establishment of the Genetic Resources Unit which gathered and assessed extensive collections of different species and ecotypes. ‌A long-standin 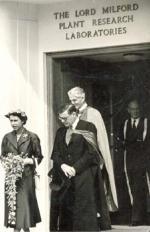 g interest in hybrids between perennial and Italian ryegrass came to fruition in the 1970s with the release of fertile tetraploid hybrids by Dr Les Breese and his colleagues, which led to the Station being honoured with the Queen’s Award for Technological Achievement in 1976. The Award was presented at Gogerddan by the Lord Lieutenant of Dyfed,‌ Col. Hanning Phillips, the son of Lord Milford.

Changes of name and remit

The breeding of herbage and cereal crops was stepped up in the 1970s following a dip in the number of varieties being produced. This arose partly as a result of increased competition from foreign commercial breeders but also due to a belief that new varieties should be a spin-off from plant breeding’s adjunct sciences rather than the result of ‘operational’ and focussed plant breeding. The success of this revised strategy in terms of variety production put the Station – by then part of the Institute of Grassland and Animal Production (IGAP) - in an advantageous position when it was decided that, from 1989, 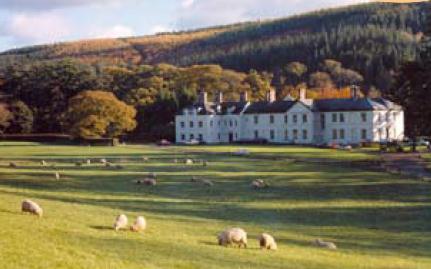 the so-called near market costs of breeding should be borne by the commercial sector. Long and fruitful relationships with Germinal Holdings and Semundo Ltd (now Senova Ltd) have followed. A further change of name and remit occurred in 1990 with the creation of the Institute of Grassland and Environmental Research (IGER) to reflect the inclusion of a greater emphasis on the environment. The metamorphosis of the Welsh Plant Breeding Station into IGAP and then IGER acknowledged the fact that the remit of a modern research institute had to be wider than plant breeding alone. Given the scale of research, it was clearly untenable to make the case that everything fed into the breeding of new varieties. 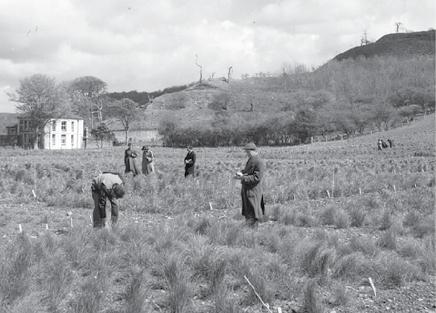 “The experience of working at what was then the Welsh Plant Breeding Station was indeed formative and very enjoyable. There was an atmosphere of collaborative research at the WPBS of those days and I’m delighted it still prevails in my contacts with IGER. The good social atmosphere was displayed in many ways, including both hockey and cricket teams in which I participated” and later “the two way information flow between basic, strategic and applied research, was a very significant aspect of the work at WPBS when I was here. I’m delighted to see that it is still very characteristic of IGER.” (Edwards, 1994.)

New opportunities in the 21st Century

The joined-up approach of IGER to delivering research outcomes has indeed continued to the present day. In 2003, the NIAB Variety Cup for the variety combining improved quality with excellent agronomic performance was presented to IGER and British Seed Houses (part of Germinal Holdings Ltd) for the perennial ryegrass variety AberDart, and the NIAB Cereal Cup for the best cereal of the year was presented to IGER and Semundo Ltd for the winter oat Gerald. 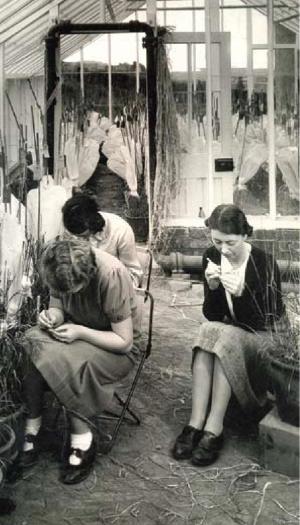 The award of the NIAB Cereal Cup to an oat variety occurred 47 years after E. T. Jones had been presented with the same cup for the winter oat Powys in 1956. In 2007, IGER was awarded the RASE Technology Award for the development of innovative crop varieties, including high sugar and more digestible forage grasses, more persistent and consistent white clovers, high quality oats, improved turf grasses and disease-resistant pearl millet. In the wider perspective, the award reflects the ethos of the plant breeding research at WPBS over the years, in that research has been focussed on radical and innovative improvements, creating new scenarios rather than mere incremental changes aimed at adding varieties to recommended lists. For example, high sugar grasses not only improve digestibility and intake of fresh herbage and silage, but also increase the efficiency with which ruminants utilise the protein in fresh herbage, thereby reducing excretion of nitrogen in the urine. This has major implications for lowering nitrate concentration in water courses. Further progress in increasing sugar levels in ryegrass and other targets to meet policy objectives can be expected through the use of molecular biology for high precision breeding.

In recent years, the Institute has diversified into bioenergy crops. Stapledon and his colleagues would surely have approved of the great efforts now being applied to the genetic improvement of the giant energy grass Miscanthus. The physiologists of the 1960s and 70s would also have found Miscanthus to be an easier crop to work on than perennial ryegrass by virtue of its size. High sugar ryegrasses also present major bioenergy opportunities for use as a raw material familiar to farmers for the production of biofuels. This aspect is considered further in a separate chapter. In 2008, IGER merged with the Institutes of Biological Sciences and Rural Sciences to form the Institute of Biological, Environmental and Rural Sciences (IBERS), once again as part of Aberystwyth University and with a new director, Professor Wayne Powell. Genetic improvement aimed at meeting the scientific and policy objectives of BBSRC, Defra, the Welsh Assembly Government and the EU, particularly in mitigating and adapting to climate change, forms a large part of the research programmes. Inevitably, the mission of the new Institute is different from its original remit and those of subsequent reincarnations, but, in becoming part of a larger organisation, IBERS offers considerable opportunities for visionary inter-disciplinary and integrated research that has served us so well for the last 90 years.