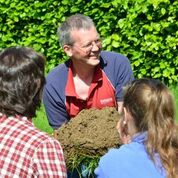 in its farmer-led participatory approach, the PROSOIL project is a collaboration between farmers across Wales and IBERS scientists. By actively working with commercial development farmers, the project has achieved an impact on commercial farming practice across Wales, by increasing farmers’ awareness of the importance of soil health.

Managed by Dr Christina Marley in collaboration with the IBERS Grassland Development Centre (GDC), an extension team managed by Dr Heather McCalman, the PROSOIL project engages with commercial development farmers, including dairy, beef & sheep producers, to monitor the quality of soil on their farms and the forage available to their livestock.

The PROSOIL project has helped develop the adoption of new research amongst farmers and established a network of farmers and stakeholders who acted as ambassadors to the project findings and promote ongoing awareness and engagement to other farmers, reaching over 900 members.

Agricultural events and shows across the UK and development farm open days, allow organic and conventional producers to engage in knowledge transfer and active participatory learning with the agricultural community and the wider public. A popular interactive feature of the IBERS stand at the Royal Welsh Show and Winter Fair, the project also aims to build up the PROSOIL network of farmers whose members receive regular newsletters, factsheets and details of up and coming events.

"Farmers’ experience of participation has led to widespread adoption of new techniques, and critically, changes in understanding of the issues around soil management and health."

“By volunteering for the PROSOIL PROJECT I’ve learned that successful grass production all starts with healthy soils...When I first started I thought like most farmers that having soil analysis based on correct N, P, K, and PH was sufficient. I now know that there are so many other important factors to consider in growing better grass and improving soil structure. My objective now is to put into practice what I have learnt across the whole farm.” - Alwyn Phillips, Penygelli Farm

The [PG1] PROSOIL project (Project Ref. A AAB 62 03 qA731606) was funded through the Rural Development Plan for Wales 2007-2013, funded by the Welsh Government and the European Agricultural Fund for Rural Development.

Grasslands cover major land areas of the UK and are located in areas of high rainfall, often acting as river catchments. In new grass varieties developed by scientists at IBERS, more efficient root systems increase the ability of grass to both reduce erosion and flood risk from heavy rain and to hold water in the soil during dry periods.

Rooting depth determines the soil volume from which plants are able to draw water and, influenced by various soil hydraulic properties, defines the water capacity available to the plant. IBERS is developing grass and clover varieties with deeper root syst

ems, and which can respond to drought stress by promoting root growth to better access water that may lie deep within the soil. Using the genetic variation available in ryegrasses, clovers, and their wild-type relatives, IBERS is also improving root designs for efficient nutrient uptake and use. This enhances sustainable agricultural practice.

The enhanced root systems of IBERS’ varieties help to mitigate against excessive releases of water by improving soil structure and porosity and by stabilising soils to prevent erosion. In addition, enhanced soil stability serves to reduce releases of harmful greenhouse gases and water pollutants. Roots provide further environmental safeguards through their large scale capability for carbon sequestration and represent a major resource for carbon input into soils.

Around 40% of the coast around England and Wales is protected from erosion and flooding by artificial coastal defences. These structures are proliferating around our coasts in response to rising and stormier seas, which has considerable negative impacts to coastal infrastructure and the economy.

Coastal defences tend to be poor quality habitats, supporting low biodiversity and non-natural communities of plants and animals. Biodiversity is extremely important for environmental health and resilience, and can also have a large impact on our quality of life and interactions with the natural world. 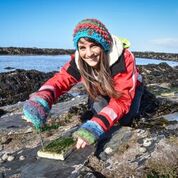 Research at IBERS led by Dr Pippa Moore has developed an innovative way to increase the biodiversity on engineered defences. The team worked with collaborators to drill-core 40 holes into the granite breakwater units at Tywyn, Gwynedd, which act as artificial rockpools. The artificial rockpools support greater marine biodiversity than the plain rock surfaces of the breakwater, and they are just as diverse and productive as natural rockpools (although support different communities).

Creating artificial rockpools is a simple, cost-effective method of enhancing coastal biodiversity. The work has won the “Most Innovative Design” award in the annual ecological engineering awards competition from CIRIA (the national construction industry research and information association), and has been incorporated into a best-practice guide for coastal engineering (Coastal and Marine Environmental Site Guide, second edition).