Cows hold key to antibiotics of the future

IBERS research teams are using their expertise in the microbial system of the rumen to identify new antimicrobial compounds, and working with biotech companies to test their effectiveness and in future bring them to market.

Antibiotic resistance is becoming an increasing global issue. Infections that are resistant to multiple antibiotics are increasing in prevalence, and in the future, such resistance could make everyday diseases untreatable. In 2011 in the UK, 2,704 hospital deaths occurred due to bacterial infections, many being related to MRSA and drug resistant Clostridium difficile.

Compounding the problem, very few new antibiotics are in the development pipeline, partly due to a lack of investment. Only three new classes of compounds have come to market in the last 30 years.

Natural sources provide the most diverse compounds for drug discovery and development and the most alternatives to drugs already in use. Most existing antibiotics are based on compounds that microorganisms produce that kill or inhibit the growth of other microorganisms. 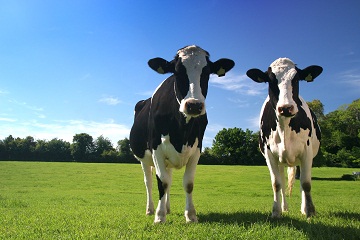 The rumen is a specialised compartment in the gut through which cows are able to acquire nutrients from plant-based food by fermenting it prior to digestion in the stomach, principally through bacterial actions. The rumen contains a rich diversity of microorganisms, some of which have already been reported to have antimicrobial properties. The BBSRC Institute Strategic Programme Grant in Rumen Systems Biology at IBERS has produced very large quantities of data on the diversity and activity of microbes in the rumen, which are being used to better understand this microbial ecosystem.

Ongoing work led by Dr Sharon Huws has identified over 100 novel antimicrobial candidates produced naturally by rumen microorganisms. The team has completed pre-clinical testing, and the most promising candidates are currently undergoing further trials. The team is also looking at how the new compounds can kill bacteria, and how likely it is that bacteria develop resistance to the new compounds. Overall, the work aims to discover suitable antibiotic candidates that industrial partners would develop further through clinical work.

The problem of antibiotic resistance is particularly important for developing countries where antimicrobials can be often be bought over the counter without medical consultation. Dr Huws and her group have been working on this project with Brazilian collaborations and with the Nigerian government, supported by the BBSRC, the Newton Fund, and the National Research Network in Life Sciences.

“We have known for many years that some of the rumen microbes produce the antimicrobial bacteriocins, which aids their competitiveness in the rumen.  Therefore it seemed likely that they also produced other antimicrobials which could potentially be used to treat human infections.” –Sharon Huws

One way of improving the competitiveness of UK grassland production while also reducing its impact on the environment is to develop and use new grass varieties that require less fertiliser, improve production per animal, and improve the efficiency with which ruminant animals utilise the nitrogen in their diets.

Improving the sugar content in grasses results in improved efficiency of plant protein conversion, providing an economic benefit to farmers through improved feed conversion and an environmental benefit through reduced nitrogen pollution. 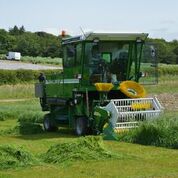 More than ten high sugar perennial ryegrass varieties have been produced by IBERS, including  AberGreen, AberZeus, AberBite, AberChoice, AberSweet, AberMagic, AberStar, AberDart, AberAvon and AberZest and a hybrid ryegrass AberEcho, all of which have been successfully added to recommended lists in UK and elsewhere in the world. In 2015 AberGreen was the winner of the NIAB Variety Cup. In addition, five further varieties have been entered into UK national list trials. A partnership between IBERS and Germinal Holdings, the UK owned forage and grass seed production and wholesale marketing and distribution company, has enabled these varieties to be made widely available to all UK farmers.

The impact of high sugar grasses on the livestock sector has been significant. High sugar ryegrass varieties bred at IBERS have been shown to increase milk production by up to 6% more milk per cow over grazing season, and for beef, contribute to a 18-35% higher daily live weight gain. In the lamb sector, high sugar grasses have led to a 10-15% higher daily live weight gains with a 20% higher carrying capacity of swards containing the HSG varieties.

The economic impact of this work is significant: high sugar grass varieties currently account for over 28% of the perennial ryegrass seed sales in the UK, with over 150,000 hectares sown in the UK alone since 2008.