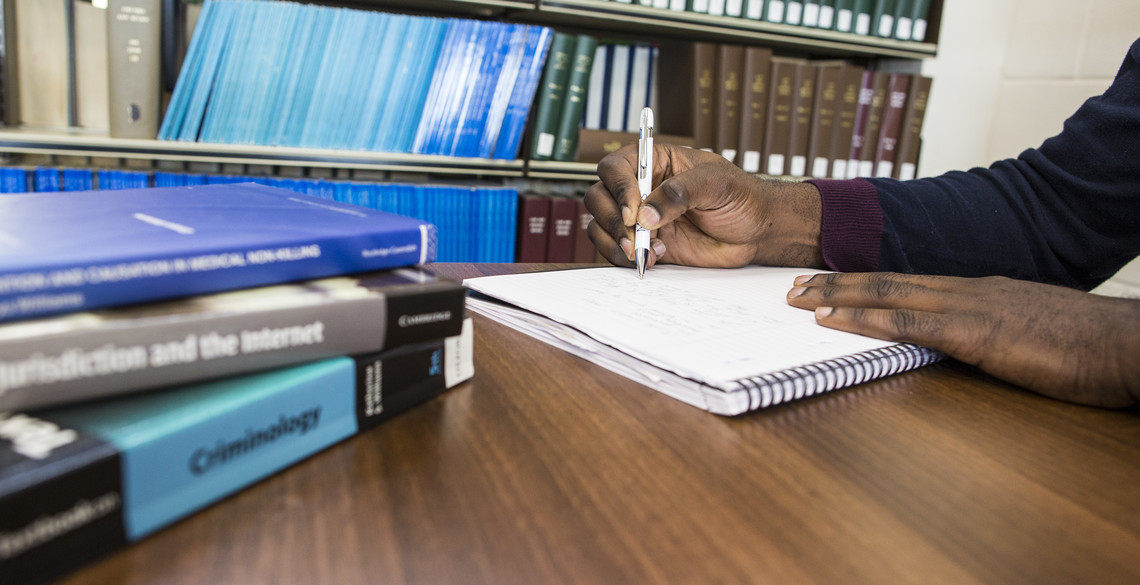 The Department of Law and Criminology is a research-active department and we have a wide range of research expertise in both law and criminology.

The Department’s Centre for Age, Gender and Social Justice has attracted £1,700,000 in external funding under the leadership of Ms Sarah Wydall, who is the Principal Investigator for a number of projects examining the responses to domestic abuse in later life, dementia and generational violence.  Our Veterans Legal Link project, led by Dr Ola Olusanya, has received £564,223 for research into access to justice for military veterans and their families. Read more about both these in Our Projects.

Three staff have won Welsh Crucible Awards in recent years, aimed at early-mid career researchers, to develop their research leadership potential. We currently have around 30 PhD students - many from overseas.

Our staff contribute significantly to the research base of Law and Criminology. Such contribution comprises both the supply of subject expertise and work which feeds into the development of academic and professional infrastructure, networking and significant impact activities. Other contributions have been made at the national, UK and international levels through refereeing and reviewing, guest lectures, external examining, development of collaborative projects, advising on research policy, as well as participation in and organising conferences and research meetings.

We have engaged consistently with aspects of devolution in Wales, contributing oral expert evidence to the Silk Commission on Devolution in Wales, the Commission on Justice in Wales and the Constitutional and Legislative Affairs Committee of the Welsh Parliament. Staff members were also on panels of academic experts addressing the provisions of the Wales Act 2017, convened both by the Welsh Government and the Wales Office and the Office of the Secretary of State for Wales.

Our staff have advised nationally and internationally on research policy and standards (including for the AHRC Peer Review College; the ESRC and the Ministry of Justice Research Consultation Group; the Italian Ministry of Research; the Polish National Science Centre, the Austrian Research Council, the Fund for Scientific Research (Belgium) and the Australian Research Council). Engagement with the professional sector in carrying out or reporting on research is an established part of our activity, which enhances our individual and institutional impact.

Research staff put their expertise to use as members of public sector and international advisory bodies, including the Law Commission's Welsh Advisory Committee, National Advice Network Wales; the Council of Europe’s Group of Experts on Action against Trafficking in Human Beings (GRETA); and the Wales Anti-Slavery Leadership Group.

There has been extensive outreach and engagement activity by staff. In addition to those already mentioned, our staff have, for example: