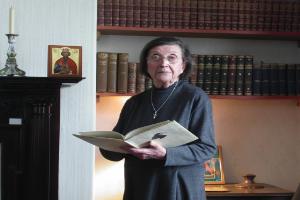 Aberystwyth University lifelong learning tutor, Professor Nicole Crossley-Holland has been invited to give the 2011 annual lecture at the Institute of Historical Research, organised by the Historical Association. The lecture, titled ‘Food in Medieval Russia from AD 754 to 1480, including the significance of Christmas in Russia’ will take placed in Senate House, the University of London, on 10 December.

Nicole is a hugely popular lifelong learning tutor who teaches a number of fascinating Russian history courses in the Carmarthen area.

Born in Paris of French and Russian Orthodox parents, Nicole, as she is known to her students, studied at the Sorbonne where she obtained her Doctorat-es Lettres.  Over a teaching career spanning 56 years, Nicole has lectured at the Sorbonne, Universities of British Columbia and California and, in England, at the Universities of Leeds, London and Cambridge.

A medieval historian, longstanding member of the IHR and Donor to the Annual Fund and an Honorary Fellow of the University of Wales, Nicole has also authored many books, including Living and Dining In Medieval Paris : The Household of a Fourteenth-Century Knight.