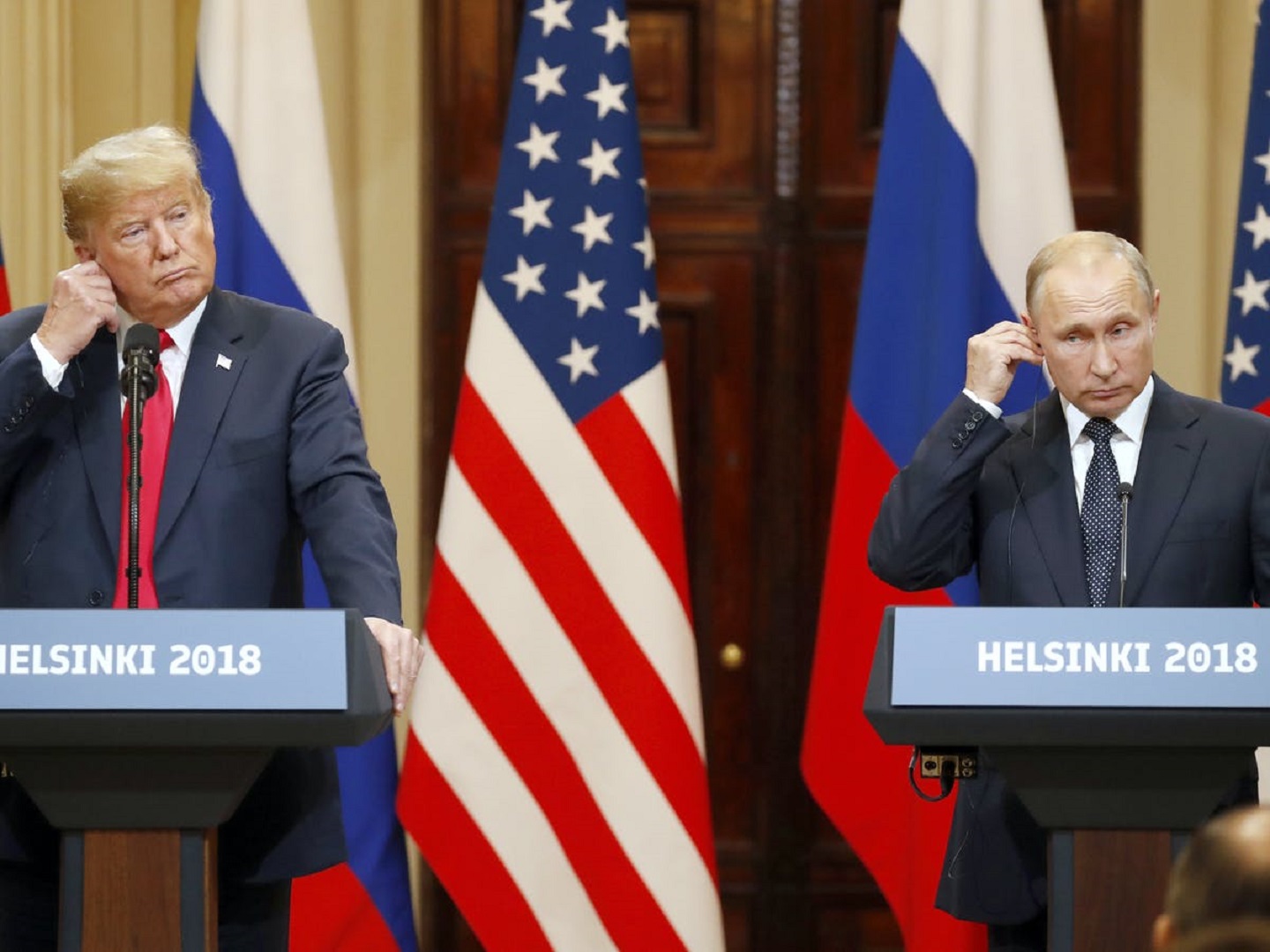 Intelligence appears to be concentrated on the right-hand side of the stage. EPA-EFE/Anatoly Maltsev

Writing in The Conversation, Kyle Cunliffe, PHD student from the Department of International Politics, discusses Donald Trump’s relationship with the Kremlin in a new book by veteran US journalist Craig Unger, claiming that the former US commander-in-chief was cultivated as a Russian intelligence asset

The question of Donald Trump’s relationship with the Kremlin has surfaced once again, this time in a new book by veteran US journalist Craig Unger. The book, American Kompromat, claims that the former US commander-in-chief was cultivated as a Russian intelligence asset for more than four decades.

It’s not the first time this has been reported. In 2017 the former Moscow correspondent for The Guardian Luke Harding published a book: Collusion: Secret Meetings, Dirty Money, and How Russia Helped Donald Trump Win, which propounded roughly the same idea – that Trump had been courted for years after marrying his first wife, Ivana Zelnickova, a model from Czechoslovakia. And then there’s the Christopher Steele dossier, published in 2017 with its allegations of honey-trap blackmail and bizarre sexual practices. Although this came with a big “handle-with-care” caveat.

Could it really be true that one of Washington’s bitterest adversaries would have a stooge at the very top of its ranks? To consider this question it’s important to understand the distinction between an asset and an agent (or spy).

Former KGB major, Yuri Shvets, who appears to be Unger’s key source, compares Trump to the infamous Cambridge Five – a group of ideologically motivated agents in the heart of the British establishment, who willingly and systematically supplied the Soviet Union with state secrets over several decades to advance the communist cause. When you compare their story with that of the former US president, something looks wrong.

During Trump’s tenure, NATO turned its heels towards Russia, and the Magnitsky Act has made life very difficult for a lot of powerful Russians by targeting their assets in the west. British intelligence has reclassified Russia as a “tier one” threat, putting it on at least equal footing to transnational terrorism.

Meanwhile, in 2018, the US expelled more than 60 Russian officials after identifying them as intelligence officers. To put it bluntly, any gains Russia might have achieved through Trump’s good offices are far outweighed by the strategic, economic, and counterintelligence realities that have emerged during his presidency.

“Assets” in intelligence jargon, can mean anything from full-blown agents (people who knowingly offer their country’s secrets to a foreign intelligence agency) to those who might serve some use along the way. But they are far more likely to be at the more casual end of that spectrum. To identify and handle agents, intelligence officers need to expand their social circles (to meet more people in sensitive positions), find private safe houses and develop plausible cover stories to explain why they are meeting.

On the other hand, making friends with a masseuse who gives massages to oligarchs while they gossip about Kremlin affairs could represent a perfect asset. An elderly babushka who attends dissident rallies and owns a private B&B? Perfect asset. An overworked secretary who arranges scientific conferences in China? Perfect asset.

Few assets ever become spies proper. The simple proposition “would you like to work for our intelligence agency?” is never an easy sell. If a source panics or overreacts, they might tell the authorities. At which point, that relationship is either swiftly ended, or the asset becomes a counterintelligence pawn, playing the intelligence officer at his or her own game. When one overly eager Russian officer tried to recruit an American diplomat a few years ago, he made the mistake of playing his cards too early. The result? The diplomat reported the encounter, and the FBI then set up their own meeting with the Russian, “turning the game back on him”.

As such, an intelligence officer never asks a useful asset to become an agent unless they’re confident of a positive answer. In many cases, an asset doesn’t even know they’re an asset. In what’s known as “tradecraft” in the world of espionage, it’s often better to let assets exist in blissful ignorance of the intelligence officer’s intentions, trading friendly favours and gossip. That isn’t really espionage, it’s just business.

Just look at Carter Page, one of Trump’s former foreign policy advisers. Despite his strong pro-Kremlin views, despite living in Moscow in 2004, and despite being a target of Russian intelligence, there is no evidence that Page crossed the threshold. Russian intelligence officers certainly attempted to cultivate Page, but even the Mueller report couldn’t determine whether or not he was a full-blown agent.

But why should he be? Carter was a fan of Putin, so Russian officers could bank on him taking the Kremlin’s interests straight to Trump’s team even without explicit instruction. He needn’t be anything more than a friend, and the Russians needn’t risk asking for anything more.

Now compare this to the allegations levied against the 45th president. According to Unger, once Trump came on to the KGB’s radar in 1977, he was fed a cocktail of flattery and subtle manipulation, which is nothing new for asset cultivation. The Steele dossier, largely discredited, made allegations of blackmail, which fits within the Russian proclivity for seeking out compromising information about their targets.

But any Russian intelligence officer would need to consider whether Trump really cares enough about kompromat and Russian money. Indeed, why enrol him as an agent of influence – a move that carries enormous consequences for both parties – when Russia could opt for a convenient friend in Washington?

In reality, even if Russia sees Trump as an asset, we’re not talking about Trump being a new Kim Philby (of Cambridge Five fame). We’re talking about Trump being a self-interested businessman who’s happy to do a favour if it works to his own best interests – and that includes staying out of jail. There’s no evidence that Trump knowingly associated with any Russian intelligence officers. And there’s a big distinction between making the wrong kind of friends and committing treason.

Simply put, an agent is a partner for life, whereas an asset is a friend with benefits. And, most likely, if Trump has been one of the two, it’s the latter.