Fibre-optics used to take the temperature of Greenland Ice Sheet 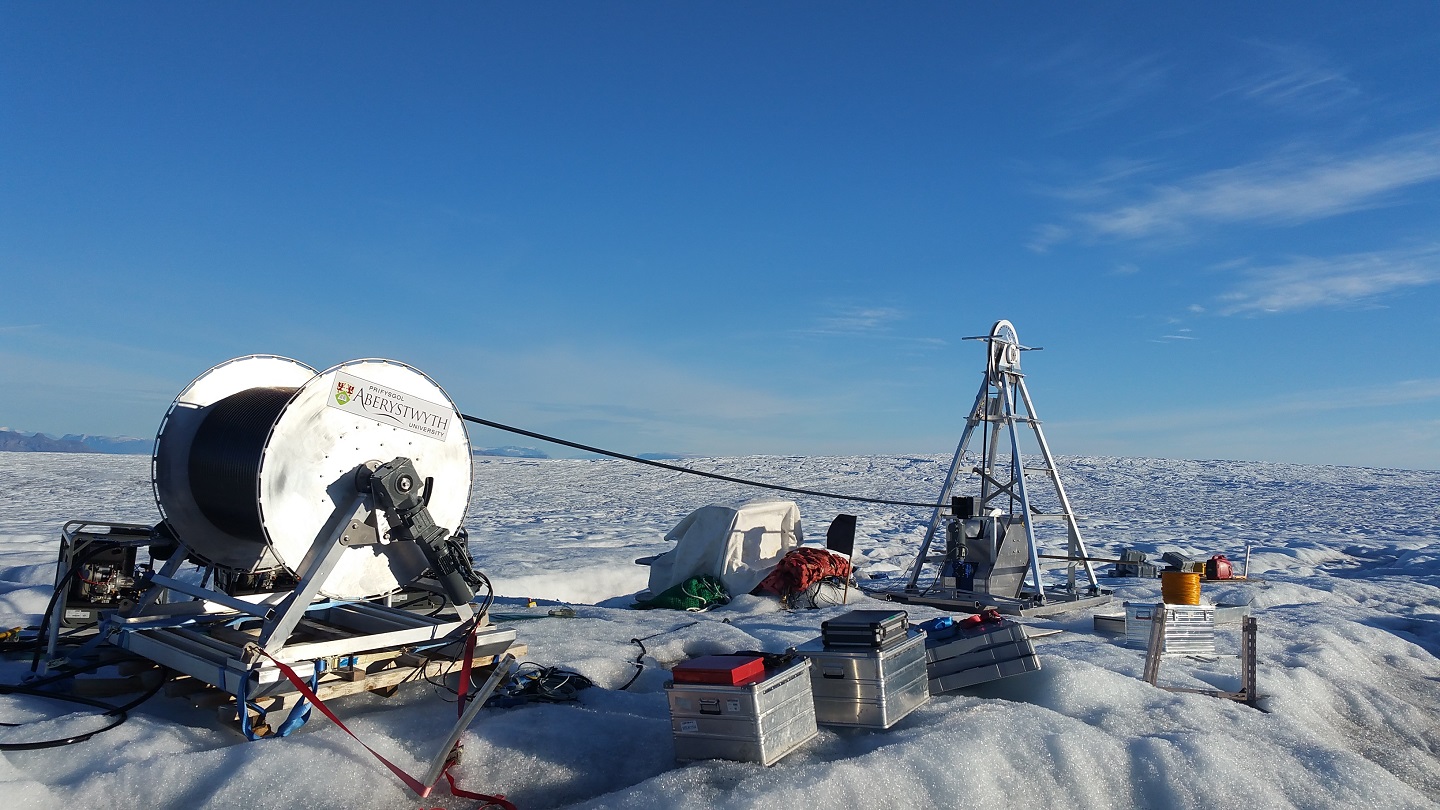 As part of the project, scientists from Aberystwyth University set up special equipment on the Greenland Ice Sheet to drill deep into the glacial ice.

Scientists have used fibre-optic sensing to obtain the most detailed measurements of ice properties ever taken on the Greenland Ice Sheet.

Their findings will be used to make more accurate models of the future movement of the world’s second-largest ice sheet, as the effects of climate change continue to accelerate.

The research team, led by the University of Cambridge, used a new technique in which laser pulses are transmitted in a fibre-optic cable to obtain highly detailed temperature measurements from the surface of the ice sheet all the way to the base, more than 1000 metres below.

To install the cable, the scientists had to first drill through the glacier, a process led by Professor Bryn Hubbard and Dr Samuel Doyle from Aberystwyth University.

After lowering the cable into the borehole, the team transmitted laser pulses in the cable, and then recorded the distortions in the scattering of light in the cable, which vary depending on the temperature of the surrounding ice.

Engineers at Delft University of Technology in the Netherlands and geophysicists at the University of Leeds assisted with data collection and analysis.

In contrast to previous studies, which measured temperature from separate sensors located tens or even hundreds of metres apart, the new approach allows temperature to be measured along the entire length of a fibre-optic cable installed in a deep borehole.

The result is a highly detailed profile of temperature, which controls how fast ice deforms and ultimately how fast the ice sheet flows.

The temperature of ice sheets was thought to vary as a smooth gradient, with the warmest sections near the surface where the sun hits, and at the base where it’s warmed by geothermal energy and friction as the ice sheet grinds across the subglacial landscape toward the ocean.

The new study found instead that the temperature distribution is far more heterogenous, with areas of highly localised deformation warming the ice further. This deformation is concentrated at the boundaries between ice of different ages and types. Although the exact cause of this deformation remains unknown, it may be due to dust in the ice from past volcanic eruptions or large fractures which penetrate several hundred metres below the surface of the ice.

The results are reported in the journal Science Advances published today (Friday 14 May 2021).

Mass loss from the Greenland Ice Sheet has increased sixfold since the 1980s and is now the single largest contributor to global sea-level rise.

Around half of this mass loss is from surface meltwater runoff, while the other half is driven by discharge of ice directly into the ocean by fast flowing glaciers that reach the sea.

In order to determine how the ice is moving and the thermodynamic processes at work within a glacier, accurate ice temperature measurements are essential. Conditions on the surface can be detected by satellites or field observations in a relatively straightforward way. However, determining what is happening within and beneath a kilometre thick ice sheet is far more challenging, and a lack of observations is a major cause of uncertainty in projections of global sea-level rise.

The RESPONDER project, funded by the European Research Council, is addressing this problem using hot-water drilling technology to bore through Sermeq Kujalleq (Store Glacier) and directly study the environment at the base of one of Greenland’s largest glaciers.

“We normally take measurements within the ice sheet by attaching sensors to a cable that we lower into a drilled borehole, but the observations we’ve made so far weren’t giving us a complete picture of what’s happening,” said co-author Dr Poul Christoffersen from the Scott Polar Research Institute who leads the RESPONDER project.

“The more precise data we are able to gather, the clearer we can make that picture, which in turn will help us make more accurate predictions for the future of the ice sheet.”

“With typical sensing methods, we can only attach about a dozen sensors onto the cable, so the measurements are very spaced out,” said first author Robert Law, a PhD candidate at the Scott Polar Research Institute. “But by using a fibre-optic cable instead, essentially the whole cable becomes a sensor, so we can get precise measurements from the surface all the way to the base.”

Professor Bryn Hubbard, Director of the Centre for Glaciology at Aberystwyth University’s Department of Geography and Earth Sciences, said: “This technology is a big advance in our ability to record spatial variations in ice temperature over long distances and at really high resolution. With some further adaptations, the technique can also record other properties, such as deformation, at similarly high resolution.”

Dr Sam Doyle from Aberystwyth University’s Department of Geography and Earth Sciences: “The level of detail is astounding. Where once we were guessing what was happening between measurements, now we can see clearly what is going on. We were able to identify new processes such as heat generated by deformation concentrated within a very small depth range.”

Dr Poul Christoffersen added: “Overall, our readings paint a picture that’s far more varied than what current theory and models predict. We found temperature to be strongly influenced by the deformation of ice in bands and at the boundaries between different types of ice. And this shows there are limitations in many models, including our own.”

The researchers found three layers of ice in the glacier. The thickest layer consists of cold and stiff ice which formed over the last 10,000 years.

Below, they found older ice from the last ice age, which is softer and more deformable due to dust trapped in the ice.

What surprised the researchers the most, however, was a layer of warm ice more than 70 metres thick at the bottom of the glacier.

“We know this type of warm ice from far warmer Alpine environments, but here the glacier is producing the heat by deforming itself,” said Law.

“With these observations, we are starting to better understand why the Greenland Ice Sheet is losing mass so quickly and why discharge of ice is such a prominent mechanism of ice loss,” said Christoffersen.

One of the major limitations in our understanding of climate change is tied to the behaviour of glaciers and ice sheets. The new data will allow the researchers to improve their models of how the Greenland Ice Sheet is currently moving, how it may move in the future, and what that this will mean for global sea-level rise.

The research was funded in part by the European Union.