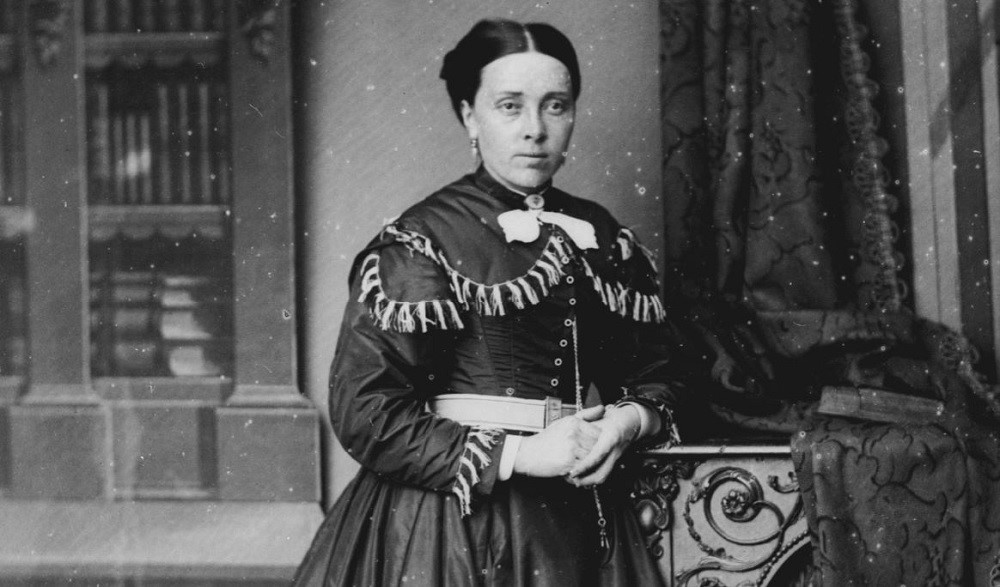 Cranogwen. Picture by the National Library of Wales

Aberystwyth University has pledged financial support to the campaign to commission a statue of trailblazing poet and journalist Cranogwen, in the Ceredigion coastal village of Llangrannog.

The Monumental Welsh Women campaign is striving to increase the number of public statues of women in Wales.  The group’s Hidden Heroines project drew attention to the fact that there is not a single statue of an historical Welsh woman in any outdoor space in Wales.  Aiming to address this gender imbalance in public art in Wales, their mission is to erect statues of five Welsh women over a period of five years.

Described as “the most outstanding Welsh woman of the 19th century”, Llangrannog-born Sarah Jane Rees (1839-1916) is better known by her bardic name of Cranogwen.

Headstrong and fiercely independent, Cranogwen resisted conforming to the restrictions of life as a Victorian woman.  She excelled in many fields, as a mariner, poet, teacher, lecturer, journalist, preacher, temperance advocate and political campaigner.

A master mariner in her own right, she was qualified to command a ship in any part of the world. A head-teacher of the village school by the age of 21, she also set up her own Navigation School in Llangrannog in 1859 where she taught navigation and seamanship to local young men. As a poet, she won notoriety as the first female winner of a poetry prize at the National Eisteddfod (Aberystwyth, 1865). She became the first woman to edit a Welsh-language women’s magazine, Y Frythones, which campaigned for girls’ education and provided a platform for other female writers. As a lecturer and preacher, she travelled across Wales and America, at a time when public speaking by women was largely disapproved of.  She also founded the South Wales Women’s Temperance Union and outlined her vision for a refuge for homeless young women.

The Monumental Welsh Women campaign intends to commission renowned artist Seb Boyesen, who lives and works in Llangrannog, to create a life-size bronze statue of Cranogwen, which will be erected near to St Carannog Church where she is buried.

Professor Elizabeth Treasure, Vice Chancellor of Aberystwyth University, said: “The University is delighted to be playing a part in this worthwhile campaign to address the lack of diversity in public monuments in Wales.  Equality has long been a key part of Aberystwyth University’s mission, having been one of the first universities in the UK to admit female students in 1874, and opening the first purpose-built university hall of residence for female students in the UK in 1896.  Cranogwen’s extraordinary and pioneering achievements have left a legacy in Ceredigion, and the University is proud to contribute towards the fundraising for a statue in recognition of her remarkable life.”

Helen Molyneux, from the Monumental Welsh Women group, said:  “We are delighted that the University is so supportive of our project and very grateful for their contribution to the fund, which will ensure that we are able to commission a statue worthy of our heroine.  Cranogwen deserves to be remembered and recognised for her achievements and we hope that her statue will be an inspiration for generations of girls in Llangrannog and West Wales to have broad horizons and big ambitions.”

The Welsh Government provided £100,000 towards the cost of the statues, which are estimated to cost £75,000 each, and the remaining cost is being sought through fundraising.  For more information about the fundraising appeal for the statue of Cranogwen visit: Cerflun Cymunedol Cranogwen Community Monument