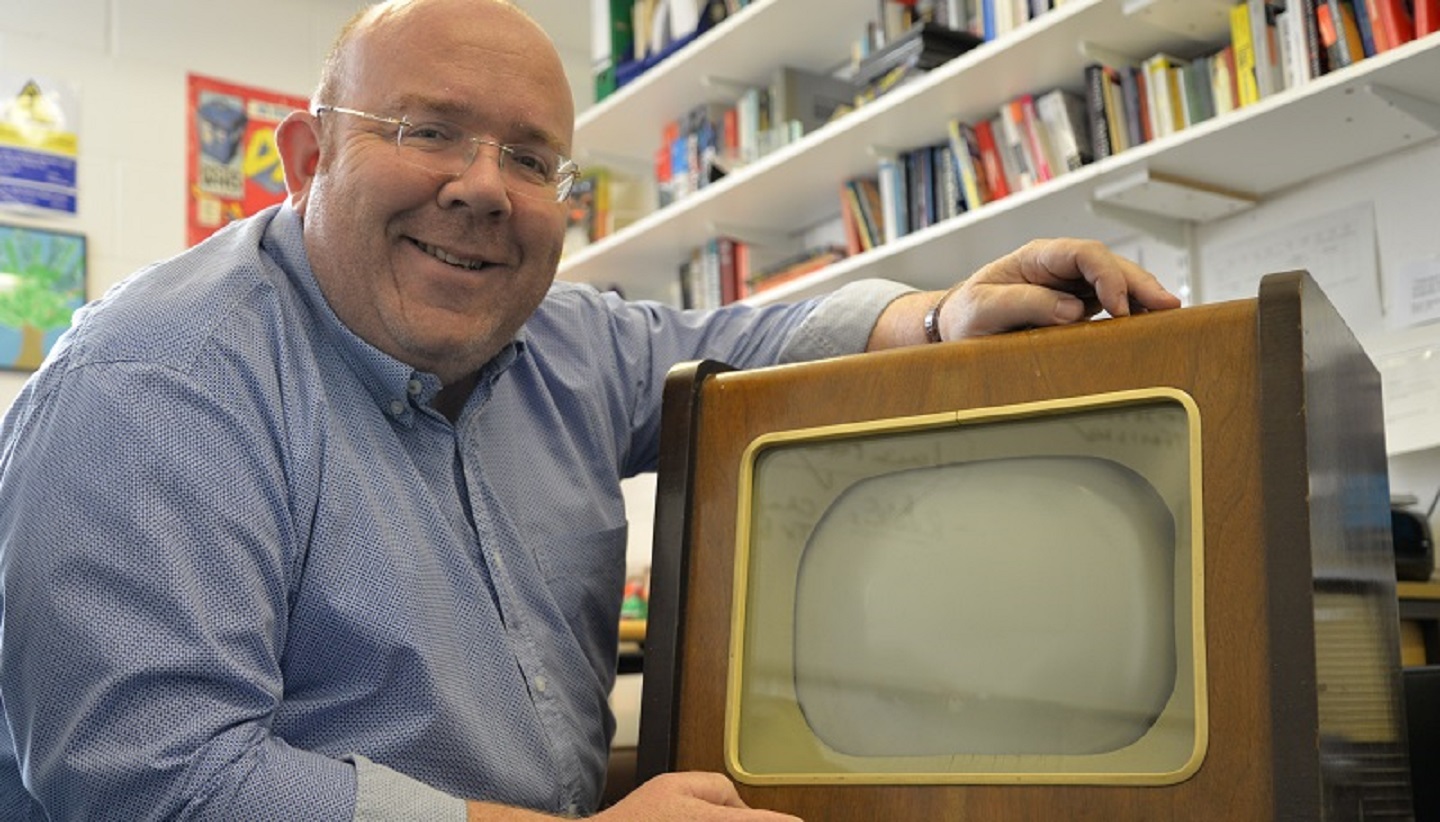 Dr Jamie Medhurst, Co-Director of the Aberystwyth University Centre for Media History and Reader in Media and Communication at the Department of Theatre, Film and Television Studies

A Department of Theatre, Film and Television Studies academic has played a key role in the creation of a new archive collection which celebrates the BBC’s rich history in entertaining the nation.

Dr Jamie Medhurst is the Lead Curator of the Entertaining the Nation archive, which offers a rare insight into broadcast entertainment across the years through newly released interviews from the BBC Oral History Collection, plus an array of rarely seen photographs.

The collection has been released to mark 85 years of entertainment television, and forms part of BBC History’s 100 Voices That Made The BBC project.

Archive highlights include insights into popular sketches from Morecambe and Wise, the controversial creation of Doctor Who and its ‘bug-eyed monsters’, innovative formats that pioneered in Sportsview, the humble beginnings of the now world-famous natural history programming, and of course the all-important battle for Saturday Night family viewing.

The Collection also includes an unseen image of the first ever broadcast knife-throwing act in a variety sequence of Here’s Looking At You in 1936.

Dr Jamie Medhurst, Reader in Film, Television and Media, explains: “The BBC has a long and proud tradition of entertaining its listeners and viewers. For almost a hundred years, the Corporation has produced a range of programmes that have engaged audiences, allowed them to escape, challenged them, made them laugh, and made them cry. Drama and comedy, sport and natural history, coverage of big events and programming specifically for the nations – the BBC has been at the heart of public service broadcasting in the UK.

“The first BBC variety show, or entertainment show, was broadcast 85 years ago on 26 August 1936. Here’s Looking at You was part of the programming which preceded the official launch of the BBC Television Service in November that year. Programmes were broadcast from the television studios at Alexandra Palace to the radio exhibition in Olympia, west London, as part of an effort to encourage people to purchase television sets.

“The insights that the interviews in the BBC’s Oral History Collection give are uniquely valuable. We get to hear voices, many for the first time, which shed light on policy decision-making, programmes, actors … and what Eric Morecambe thought of the Grieg Piano Concerto sketch with Andre Previn!”

Speaking about the latest archive release, Robert Seatter, Head of BBC History, says: “Unique voices from the BBC Oral History Collection, carefully curated and illuminated by our partner academics, really bring to life the diverse role of the BBC as an entertainer from 1936 onwards. It is fascinating to listen to the key insights from the people that were behind some of the most iconic entertainment programmes on British television and how they pioneered what we see today.”

The 100 Voices that Made the BBC archive project is a collaboration with The Sussex Humanities Lab, University of Sussex; Centre for Media History, Aberystwyth University; Department of Media and Communication, University of Leicester and The National Media Museum.

The Centre for Media History at Aberystwyth University is an interdisciplinary research centre which draws on expertise in the history of the mass media across the University.

Dr Siân Nicholas from the Department of History and Welsh History has contributed a section on 'Events that bind the nation’.

Entertaining the Nation is the eighth edition in the 100 Voices That Made The BBC collection. Previous editions cover Elections, The Birth of TV and Radio Reinvented, People, Nation, Empire and Pioneering Women.

Overall, this BBC Oral History Collection captures some of the best loved entertainment shows on BBC television, offering new revelation and insight into their creation and evolution.

The full oral history collection “100 Voices that made the BBC: Entertaining the Nation” is available online at: https://www.bbc.com/historyofthebbc/100-voices/entertaining-the-nation

100 Voices That Made The BBC: Entertaining the Nation