Belarus: Lukashenko threatens to turn off the gas to western Europe as migrant crisis deepens 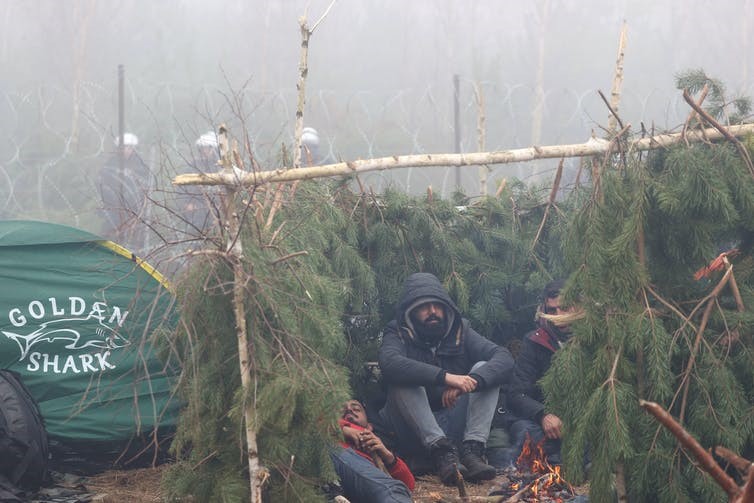 Dr Jenny Mathers from the Department of International Politics writes in The Conversation:

Threats from the president of Belarus, Alexander Lukashenko, to interrupt the flow of Russian gas to Europe are the clearest indications yet that he has no plans to back down from the rapidly escalating confrontation between Belarus and the EU over the presence of growing numbers of asylum seekers on the border with Poland.

Global energy prices are at record high levels and expected to stay there. So Lukashenko’s threat to disrupt gas supplies to Europe is one that EU leaders cannot afford to ignore.

The humanitarian crisis on the eastern borders of the EU is in fact just the latest and potentially most dangerous stage in Lukashenko’s continuing struggle to maintain his grip on power in Belarus in the face of mass protests that have undermined the legitimacy of his regime since a contested election in August 2020.

Earlier this year, reacting to the imposition of sanctions by the EU, Lukashenko threatened to “flood Europe with drugs and migrants”. And, in recent months, thousands of people have travelled to Belarus from the Middle East, Africa and South Asia in search of better and safer lives in Europe. Those who have spoken to journalists report that every step of their journey was organised by the Belarusian regime. Tour companies with links to the state sold them flights to Minsk and provided ground transport to the border. Once there, they said, members of the Belarus security services show them where to cross, and then actively prevent them from returning to Belarus if they are caught by patrols on the other side.

The lucky ones manage to evade the border guards and get help from local activists. But many remain trapped in the open without food, adequate shelter or warm clothing. At least eight people have already died.

Although the links may not be immediately obvious, the engineering of this crisis by Belarus follows directly from the protests that have gripped the country for more than a year.

The disputed presidential election of August 2020 marked the beginning of the most serious threat to Lukashenko’s position since he first became president in 1994. Even in the face of brutal reprisals by the security forces, ordinary people came out onto the streets en masse in support of opposition leader Svetlana Tikhanovskaya, whom many regard as the real winner of the election. Real political change in Belarus seemed possible.

Lukashenko’s response was firstly to remove leading opposition figures from the political arena. Tikhanovskaya left Belarus soon after the election, citing threats made against her children and finding asylum in Lithuania. Others also went into exile or, like Maria Kolesnikova – another prominent critic of Lukashenko – were imprisoned.

Journalists and civil society organisations were the next to be targeted, to remove remaining sources of support for the opposition and starve Belarusian society of independent sources of news. By the summer of 2021, Lukashenko’s strategy of dividing the opposition while keeping key interest groups – especially the security services – on his side was paying off and he could turn his attention to critics in the west.

Since August 2020, western countries have introduced a range of measures against Lukashenko’s regime, targeting key Belarusian exports as well as individuals and businesses with close ties to the president. While some critics argue that sanctions do not go far enough, it is clear that Lukashenko finds even the fact of western censure offensive, not to mention its damaging impact on the Belarusian economy.

In July, Lukashenko threatened to allow masses of migrants to pass through Belarus into the EU, making it clear that this was retaliation for EU economic sanctions against Belarus. The decision to use asylum seekers as political weapons is callous enough, but has so far proved to be highly effective in provoking a response that shows EU member states in a negative light. Poland, in particular, has declared a state of emergency and passed legislation to authorise funds to build a wall on the border with Belarus. Meanwhile its security forces have been criticised for their heavy-handed tactics against the refugees.

The recent suggestion from Russian foreign minister, Sergei Lavrov, that the EU might simply pay Belarus to keep the refugees away from Europe may indicate that Lukashenko aims not merely to punish the EU but hopes to make some material gains from this crisis. If so, he is likely to be disappointed. Far from offering concessions to Belarus, the EU has been looking for ways to impose yet more sanctions. And if Lukashenko goes ahead with his threat to block gas pipelines that cross Belarusian territory, the reduction in transit revenues will deal a further blow to his country’s economy.

The current crisis is almost certain to intensify the antagonism between the Belarusian regime and the west, especially the EU, and to strengthen its ties to Moscow. Although Lukashenko has a track record of blowing hot and cold in his relations with Russia, his response to the threat posed by Tikhanovskaya and the opposition movement has left him with little choice of allies.

The big question that remains is whether the mastermind behind Lukashenko’s migrant gamble is really Vladimir Putin. There is no firm evidence that Russia is the puppet-master, although the tactic certainly bears many of the hallmarks of Putin’s: unconventional and often indirect but well targeted measures that are effective in provoking an exaggerated response.

So far, Putin has shown no signs of intervening to restrain Lukashenko and bring an end to the current crisis. Disruption and confusion on Europe’s borders along with ethical and legal questions raised about the EU’s response to a humanitarian crisis on its doorstep all help to advance Putin’s broader agenda: to take advantage of opportunities to divide, demoralise and distract his opponents in the west.