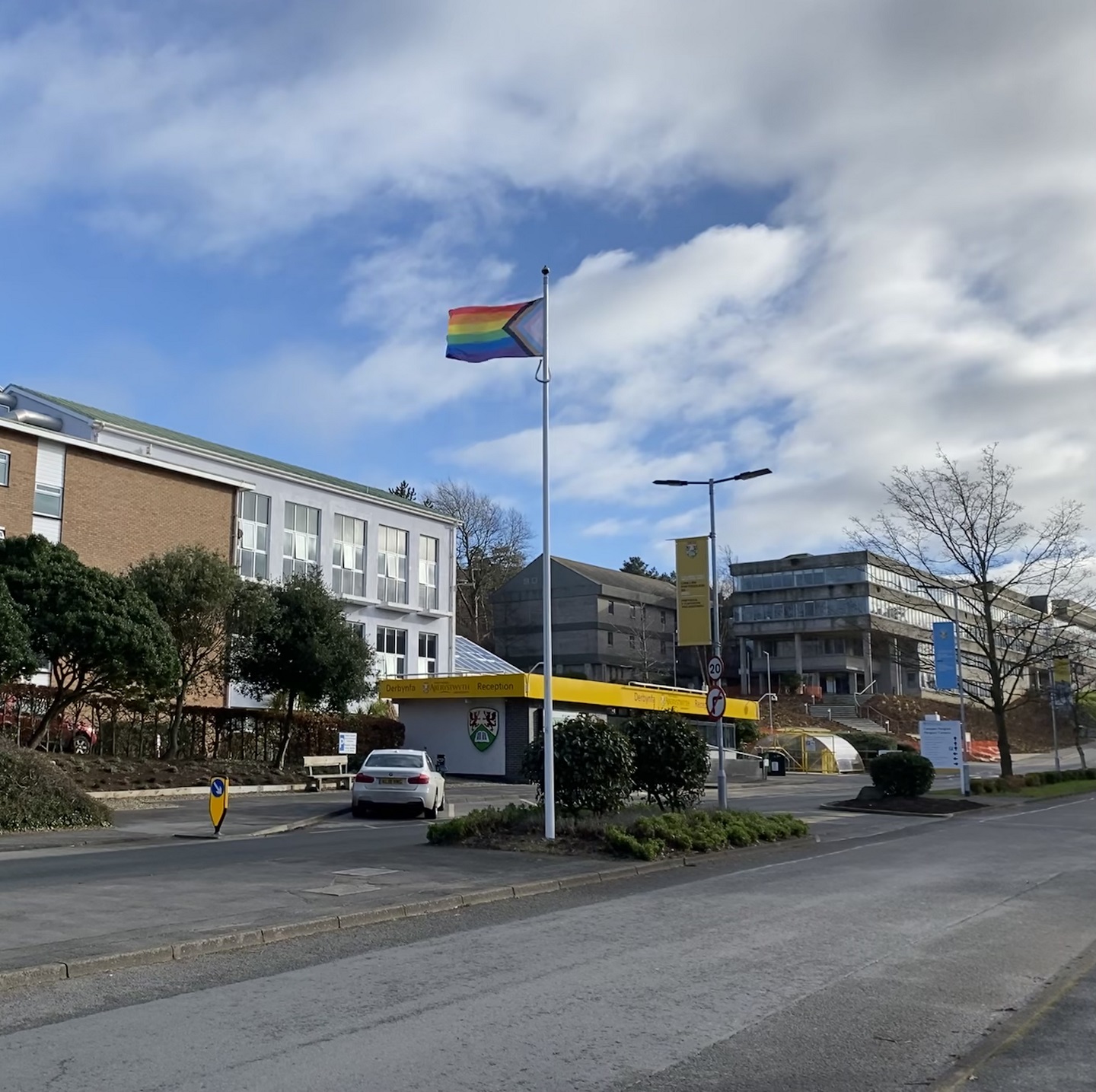 To mark this year’s LGBT History Month, Aberystwyth University has been flying the Intersectional Pride flag. In addition to the familiar rainbow colours, the flag features black and brown stripes to represent marginalised LGBT communities of colour, and pink, light blue and white used on the Transgender Pride Flag.

Aberystwyth University’s continued commitment to providing a welcoming and inclusive environment for LGBTQ+ staff and students has been recognised by leading charity Stonewall.

The University has been awarded a Bronze Award as part of Stonewall’s Bring Yourself To Work campaign, which highlights the importance of inclusive work environments.

The award, announced today (23 February), coincides with news that the University has climbed 25 places in the charity’s Workplace Equality Index.

An early adopter of the Index, Aberystwyth is up to 104th out of more than 400 organisations featured in the 2022 edition, which garnered the views of over 79,000 staff across the UK.

Professor Neil Glasser (he/him), Pro Vice-Chancellor with responsibility for diversity and inclusion at Aberystwyth University, said: “We take great pride in the inclusive nature of our community here at Aberystwyth University and the Stonewall Bronze award is just recognition for the important policy work by colleagues that has made this possible. Valuing diversity in all its forms is so important and the University’s commitment to inclusion is a cornerstone of our work here. We now look to build on these firm foundations to strengthen our community for the benefit of everyone.”

Ruth Fowler (she/her), Chair of Aberystwyth University’s LGBT Network, also welcomed the Stonewall Bronze award: “We are over the moon with this Bronze Award accreditation as well climbing in the index rankings once again. It is testament to all our staff and students who create such a welcoming and inclusive atmosphere.”

According to research by Stonewall, more than a third of LGBTQ+ staff (35 per cent) hide who they are at work, while almost one in five (18 per cent) have been the target of negative comments because they are LGBTQ+.

Liz Ward, Director of Programmes at Stonewall (she/her), said: “We spend so much of our time at work, and our career can be a huge part of how we define ourselves. Every single lesbian, gay, bi, trans and queer person should be able to be themself at work. From understanding how HR policies, such as parental leave, will affect them to being reassured that they can speak openly about their lives and partners at the coffee machine, the impact of inclusive workplaces can be life-changing.

“It’s fantastic that Aberystwyth University has gained the Bronze award for its efforts and commitment to creating an inclusive work environment, and we look forward to seeing and supporting the rest of its inclusion journey.’

Aberystwyth has been described as the ‘unofficial gay capital of Wales’ by author Niall Griffiths. The University’s Staff LGBT Network was set up in 2010 and is open to anyone who works at the University in any capacity, and any postgraduates who identify as LGBTQ, plus friends and allies of the community.

Facilitated by the University, the network has become instrumental in raising awareness of LGBT issues.