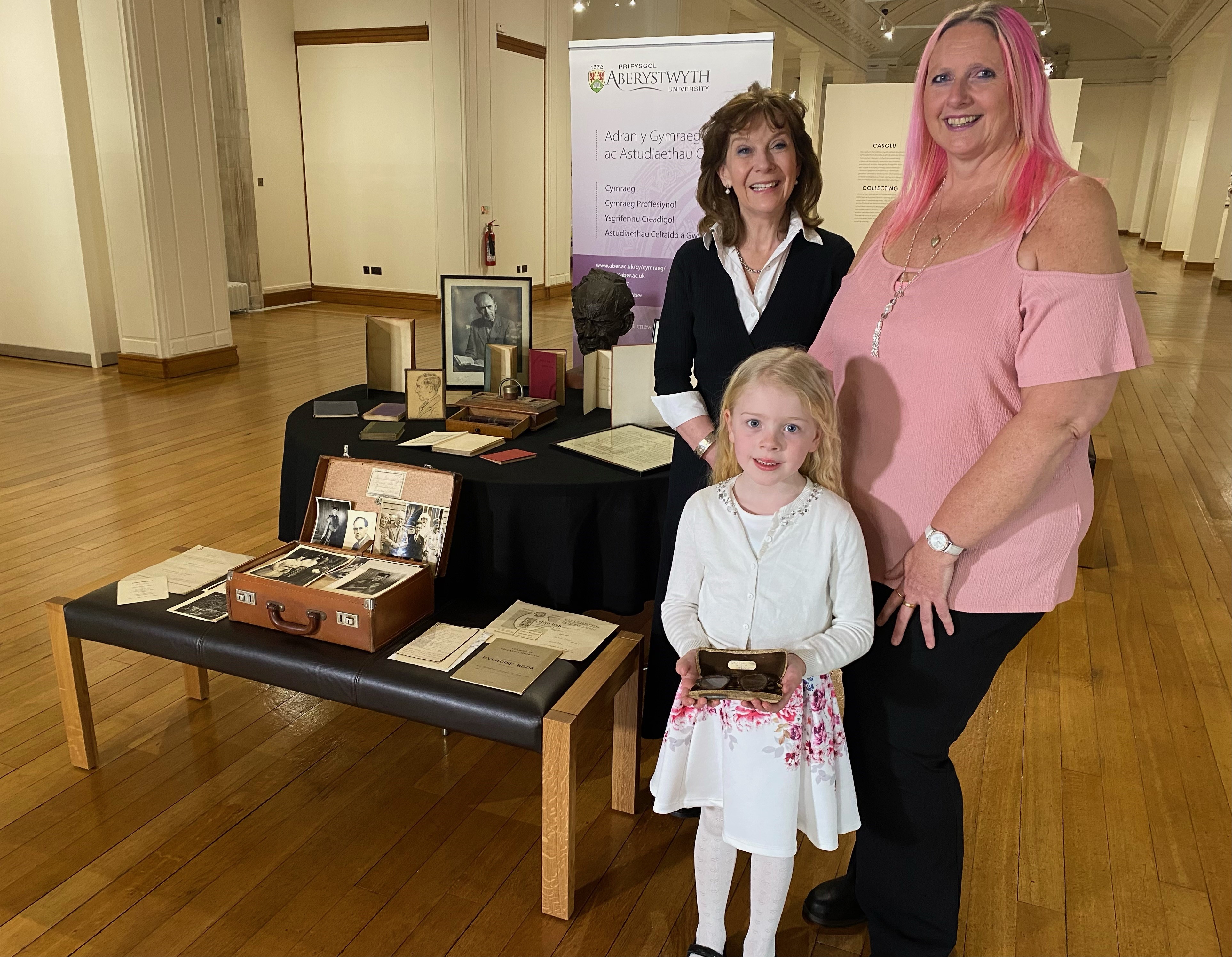 Elin Gwenallt Jones and Lowri Mair Saunders, Gwenallt’s granddaughter and great great granddaughter, with Professor Mererid Hopwood from the Department of Welsh and Celtic Studies (left) marking the presentation of objects and manuscripts that belonged to Gwenallt to the Department and the National Library of Wales.

On World Poetry Day, the family of one of Wales' most renowned writers has presented a selection of his manuscripts and personal belongings to Aberystwyth University.

Amongst the items belonging to Gwenallt (David James Jones) are the prison badge he wore and the books he had at Dartmoor when he was imprisoned for being a conscientious objector during the First World War.

Also included in the collection are his pen and ink bottle, his glasses and his "UCW Aberystwyth" glasses case from when he worked in the University's Welsh Department (1927-1966).

The manuscripts include lecture notes, personal letters and a diary of his trip to Jerusalem - which led to the compilation of his famous poem Y Coed.

There are also materials kept by his widow, Nel Gwenallt, including radio presentations, tributes and a Rock Opera, all recording the poet's life and work.

The objects and manuscripts were donated to the Department where he was a student and lecturer by his granddaughter, Elin Gwenallt Jones, who lives in Ceredigion.

The manuscripts were transferred for safekeeping at the National Library.

Elin Gwenallt Jones, the poet’s granddaughter, said: “My mother and grandmother wanted my grandfather’s papers to be kept secure, and a large part of the archive is already in the National Library. While clearing my mother’s house, however, a number of new items came to light, and I was very keen to ensure that they are also preserved and shared more widely.”

The objects will be used by Departmental staff and students for research and teaching purposes.

Mererid Hopwood, Professor of Welsh and Celtic Studies, said: “Many of our students have studied Gwenallt’s work at school before coming to us, but being able to share these objects with them, and show the poet's handwriting, brings a special significance to the words. The new archive certainly requires in-depth scholarly analysis, and we are most grateful to Elin and the family for this generous donation.”

Dr Bleddyn Owen Huws said: “Receiving this family archive is going to give us an opportunity to re-discover Gwenallt as a husband, father and grandfather. It contains material that gives us a chance to evaluate Gwenallt's legacy as a poet and cultural figure as well. We hope to lead a project where an early career researcher will work on this additional archive in the context of the archive already in the National Library.”

Dr Cathryn Charnell-White added: “We are delighted to be working with the Gwenallt family and the National Library in archiving and studying this important new material. It's a collection for Aberystwyth and, undoubtedly, for the nation.”

The objects will be kept in the Department with the intention of displaying them in the galleries at the Old College when the building re-opens in its new guise.

To ensure that researchers from all over have access to the manuscripts, they are presented to the National Library.

Pedr ap Llwyd, Chief Executive and Librarian at the National Library of Wales, said: “The National Library is delighted to receive an addition to Gwenallt's papers preserved by his family. By studying this material we can look afresh at the life and work of one of Wales's most influential poets. The material includes letters, photographs, and notes that will be of great value to further studies of the life and work of a poet who reflected the ideas and ferment of the twentieth century in his poetry. This gift is in addition to Gwenallt's manuscripts, scripts, and notes, along with material relating to ‘Cymdeithas yr Hwrddod’, a society formed by Gwenallt and Idwal Jones in Aberystwyth.” 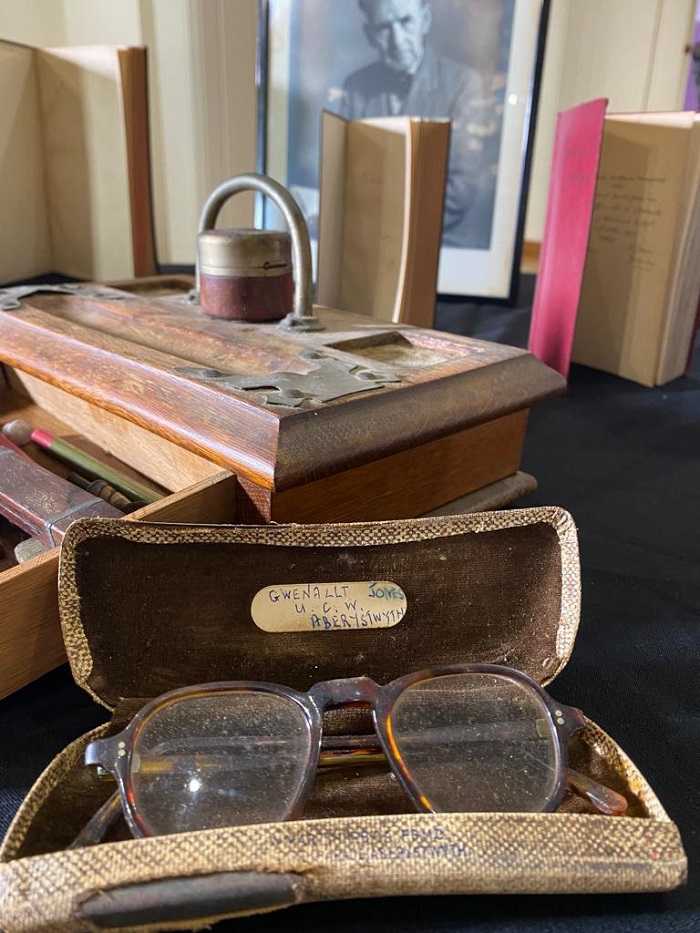 Following his imprisonment during the First World War, Gwenallt came to Aberystwyth in 1919 to pursue degree courses in both English and Welsh.

He then worked as a secondary school teacher in Barry before returning to Aberystwyth in 1927 after being appointed a lecturer in the Department of Welsh.

He won the chair twice at the National Eisteddfod in 1926 and again in 1931, and published several volumes of poetry.