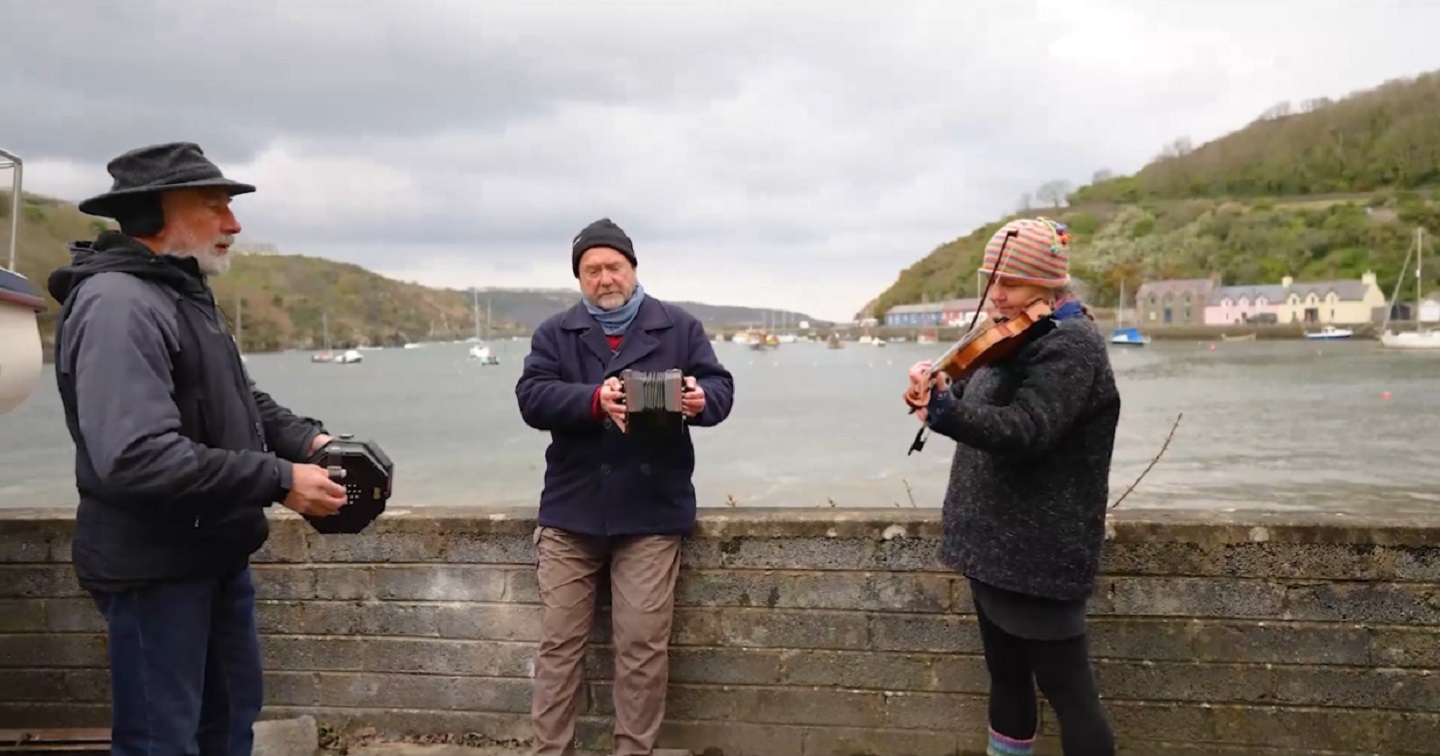 The musician Gary Jones in Abergwaun

The histories and life of five port towns in Wales and Ireland will feature in a new film that will be premiered in Aberystwyth at the end of May.

The series of eight short documentary films and one feature-length film, At the Water’s Edge: Stories of the Irish Sea, aim to promote the ports of Fishguard, Holyhead and Pembroke Dock in Wales, and Dublin and Rosslare in Ireland, as well as the three ferry routes connecting them.

The films were produced as part of Ports, Past and Present, a project which explores the history and cultural heritage of the ports, showcasing stunning views of the landscapes and wildlife of the Irish Sea coast and revealing the human histories of the port communities

In Fishguard, residents Gary Jones and Jana Davidson talk of invasions by pirates and French armies, while Hedydd Hughes explains how she teaches children about local legends. In Rosslare Harbour, the Todd family from Fishguard meet their Irish in-laws, the Fergusons.

Local historian David James shares the extraordinary story of how the son of a Japanese samurai came to plant a ginkgo tree in Pembroke Dock, and local councillor Josh Beynon explores the secret location where Star Wars’ Millennium Falcon was built.

In Dublin and Holyhead, poetry by Gillian Brownson and Gary Brown celebrates the centuries old link of their ports. Historian Gareth Huws explains how traces of Bronze Age settlements can still be seen in the Ynys Môn town.

“These films reveal the rich cultural heritage of the five port towns, following a range of local people who have intimate knowledge of their local communities. Coastal communities are often seen to be on the geographic margins, but these films show how port towns have always served as important points of passage as well as sites of dwelling.

“Cultural tourism is an important part of the Welsh and Irish economies, and we want to attract new overseas visitors to these towns, as well as engage local communities with their port heritage, in order to help combat economic deprivation.”

The films form part of a wider tourism campaign to raise awareness of the rich coastal and maritime heritage of the five selected ports and their communities.

Project leader Professor Claire Connolly from University College Cork said: “The Ports, Past and Present films frame voices, images and stories from across the five ports, enabling new forms of engagement with a shared past.”

The feature length documentary film will be launched at Ceredigion Museum on 26 May at 7pm. Tickets are free of charge and can be booked by e-mailing Rita Singer at ris32@aber.ac.uk.

Ceredigion Museum will also host a travelling art exhibition looking at the rich coastal history and heritage of the port communities.

Over the coming months, the films will have free screenings around Wales and Ireland, and then released generally so that the local communities can promote their own areas.

Ports, Past and Present is funded by the European Regional Development Fund through the Ireland Wales Co-operation Programme, and operates across four institutions in Ireland and Wales, including University College Cork, Aberystwyth University, the University of Wales Trinity St David and Wexford County Council. The film has been led by a team in the Department for Geography and Earth Sciences at Aberystwyth University.