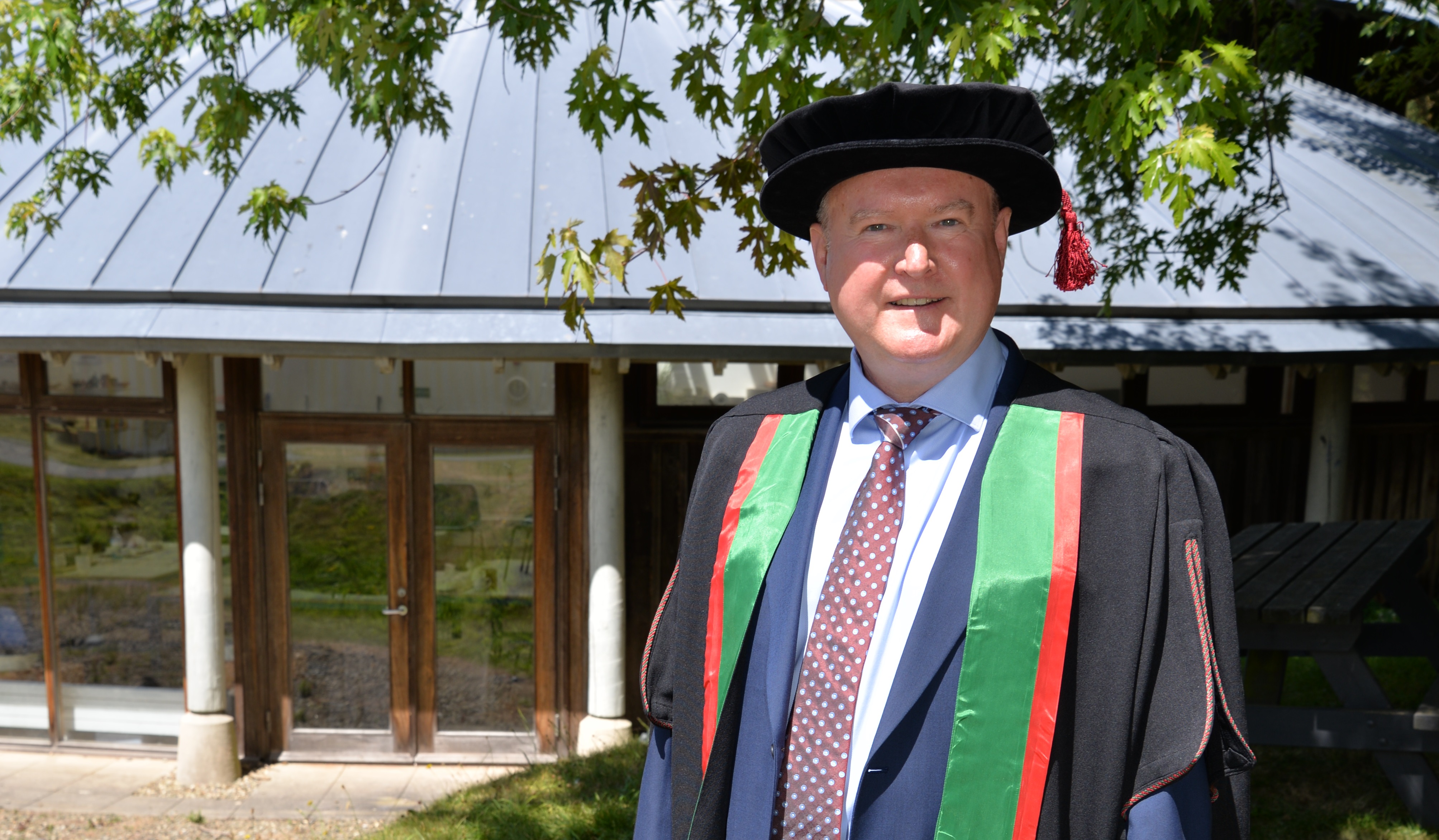 He has worked in the information technology industry for more than three decades, and is experienced in architecting business change and the formulation of strategy for global institutions, particularly in relation to digital transformation.

He has authored seven books and had numerous articles published, principally focused on change and technology, and in particular the opportunities and issues that face business users of technology.

Jonathan Whelan was presented as Honorary Fellow by Dr Fred Long from the Department of Computer Science on Wednesday 13 July 2022.

Pro Chancellor, Pro Vice-Chancellor, prospective graduates and supporters. It is an honour and a privilege to present Jonathan Whelan as a Fellow of Aberystwyth University.

Jonathan was born in Tywyn and came to study Mathematics at Aberystwyth. After his degree, he stayed on in Aberystwyth to do teacher training, and then started teaching Mathematics at Penglais School just up the hill.

His change of career to computing came when he realised that one of his teaching colleagues would need to die for him to get promoted at Penglais, and he followed a very common path for Mathematicians at that time, taking a graduate job with NatWest Bank and being rapidly trained in Computing and its value to businesses.

Like many mathematicians, he had a natural affinity for it, and over the following 15 years he rose to a position of responsibility in the bank, and in 1996 concentrated his efforts on a very important issue known as the millennium bug – that many computers would hit problems in the year 2000 because of the limited way that dates were represented.  This problem has been played down by the media since then, because when the year 2000 happened, there were very few problems caused by this millennium bug, but that was because of the efforts of many professionals such as Jonathan.

Since then, Jonathan has held influential positions in several very large enterprises, including Network Rail, Credit Suisse, Deutsche Bank, and the Royal Bank of Scotland.

His area of expertise has been business architecture – not just the technical side of computing, but how you arrange a business most effectively, employing technology to facilitate your business goals.

He has distinguished himself in that area, both in the direct effect he has had in large companies, and as an author. His writing career has been underpinned by his passion to help individuals and organisations to better understand, use and exploit technology.  He has authored seven books and written articles for local and national newspapers, professional, trade and retail publications, nationally and internationally, focused on change and technology, and in particular the opportunities and issues that face business users of technology.

All this means that the recognition he is receiving here is both appropriate and well earned.

Pro Chancellor, it is my absolute pleasure to present Jonathan Whelan to you as a Fellow of Aberystwyth University.