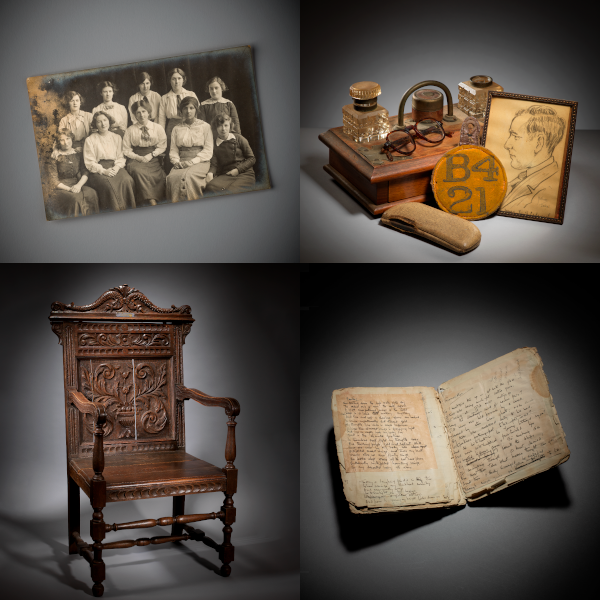 The eisteddfod chair awarded to a soldier who died in the First World War, together with other historical objects, will be central to Aberystwyth University's activities at this year's National Eisteddfod as it marks the start of its 150th anniversary celebrations.

The University was founded in 1872 following efforts to raise money locally and nationally to establish the first university in Wales, and this August marks the beginning of its 150th academic year.

On the Tuesday (2 August) of the Eisteddfod the University will launch a year of special anniversary celebrations. During the event on the University stand, there will be an opportunity to see a collection of items of historical importance to Aberystwyth University, including a statuette of the first Vice-Chancellor, Thomas Charles Edwards, and the prison badge of the former lecturer, poet and conscientious objector Gwenallt.

On the Thursday of the Eisteddfod (4 August), an event will be held to remember the stories of two students who won the chair at the College's Eisteddfod in 1912 and 1914 - Gwilym Williams who was killed in France in 1916 during the First World War, and Dorothy Bonarjee, the first woman of colourto win it.

The eisteddfod chair won by Gwilym Williams will be on display at the University's stand throughout the week. It is among 150 objects that will appear in a special volume called Ceinogau’r Werin / The Pennies of the People which is to be published in October as part of the anniversary celebrations.

"The National Eisteddfod is a very important event for us at Aberystwyth University, and especially so this year: returning to Ceredigion for the first time in over a quarter of a century and being held in-person for the first time in three years. It is even more significant for us this year as we begin to celebrate our 150th anniversary – it’s an extremely exciting time."

On the Sunday of the festival (31 July), an open day will be held at Pantycelyn Hall, offering the public and former students the first opportunity to visit the iconic student accommodation since it re-opened in its new guise in 2020 during the pandemic.

"Beginning our 150th anniversary celebrations is a unique opportunity to discuss the University's rich history, as well as to look forward. We have seen many exciting developments here over the past few years. The re-opening of Neuadd Pantycelyn in particular, is one that stands out as exceptionally important – it’s such an important space for the language locally and nationally.

“As an institution, we have been growing, with the first and only School of Veterinary Science in Wales opening here last year, and nursing education starting for the first time in September this year. We have a great deal to celebrate at this year's Eisteddfod."

As well as the events on its stand, Aberystwyth University will host several events in the Learners' Village and as the main sponsor of the Science Village on the Maes.The University's Arts Centre will also host a 'Salon de Refuses' exhibition including art from the Eisteddfod.

On Sunday 31 July at 11:15am in the Pabell Lên, an event will be held by the University's Department of Welsh and Celtic Studies to remember the life and contribution of Dr Tedi Millward with speakers including Bleddyn Owen Huws, Llio Millward, Cynog Dafis, Mark Lewis Jones and BBC broadcaster Huw Edwards.

From 2pm on the same day, there will be an open day at the refurbished Welsh-medium student accommodation, Pantycelyn Hall, in Aberystwyth.

On Monday 1 August at 2pm, a discussion 'Education, time and place: Recent research on current issues in the world of education in Wales' will be led by researchers from the School of Education on a range of research projects, including the impact of the COVID-19 Pandemic on the education system, and the new curriculum.

On Tuesday 2 August at 11am in Pabell y Cymdeithas 1, a panel discussion will be held about reforming the Senedd with speakers including Siân Gwenllian MS, chaired by Dr Elin Royles.

An awards ceremony for the best Welsh learners in mid Wales will be held at 11:30am on Tuesday 2 August at the University’s stand.

At 15:30 on Tuesday 2 August on the University’s stand, in an event called 'Hawlio Heddwch', the Chair of Wales’ Peace Academy, Dr Rowan Williams, will give a summary of its work.

At 13:00the same day, Dr Anwen Elias and Dr Elin Royles discuss the conclusions of a project about "The constitutional demands of European nationalist parties" in the Coleg Cymraeg Cenedlaethol Tent.

On Thursday 4 August at 11am, a discussion will be held about the history of the two student poets who won the chair at the College's Eisteddfod in 1912 and 1914 - Gwilym Williams who was killed in France in 1916 and Dorothy Bonarjee, the first woman of colour to win it. Dr Cathryn Charnell-White, Faeeza Jasdanwalla-Williams, Eurig Salisbury and Iestyn Tyne will speak at the event.

On Friday 5 August at 11am, Dr Elin Royles will hold a discussion with Mali Thomas from the Urdd, and a group of students who wrote the 2022 Peace Message on the theme of the climate crisis which was launched in Norway earlier this year.

A discussion between Dafydd Rhys, Eddie Ladd, Gethin Scourfield will be hosted by the University's Theatre, Film and Television Department about the history of the Welsh music video, focusing on the history of Fideo 9, at 2:30pm on Friday 5 August in Pabell y Cymdeithasau 2.

On Saturday at 11am a discussion will be held entitled "Wales: Sanctuary Nation?" in Pabell y Cymdeithasau 1.