Gorbachev and glasnost: how his fragile legacy of free speech has been destroyed by Putin 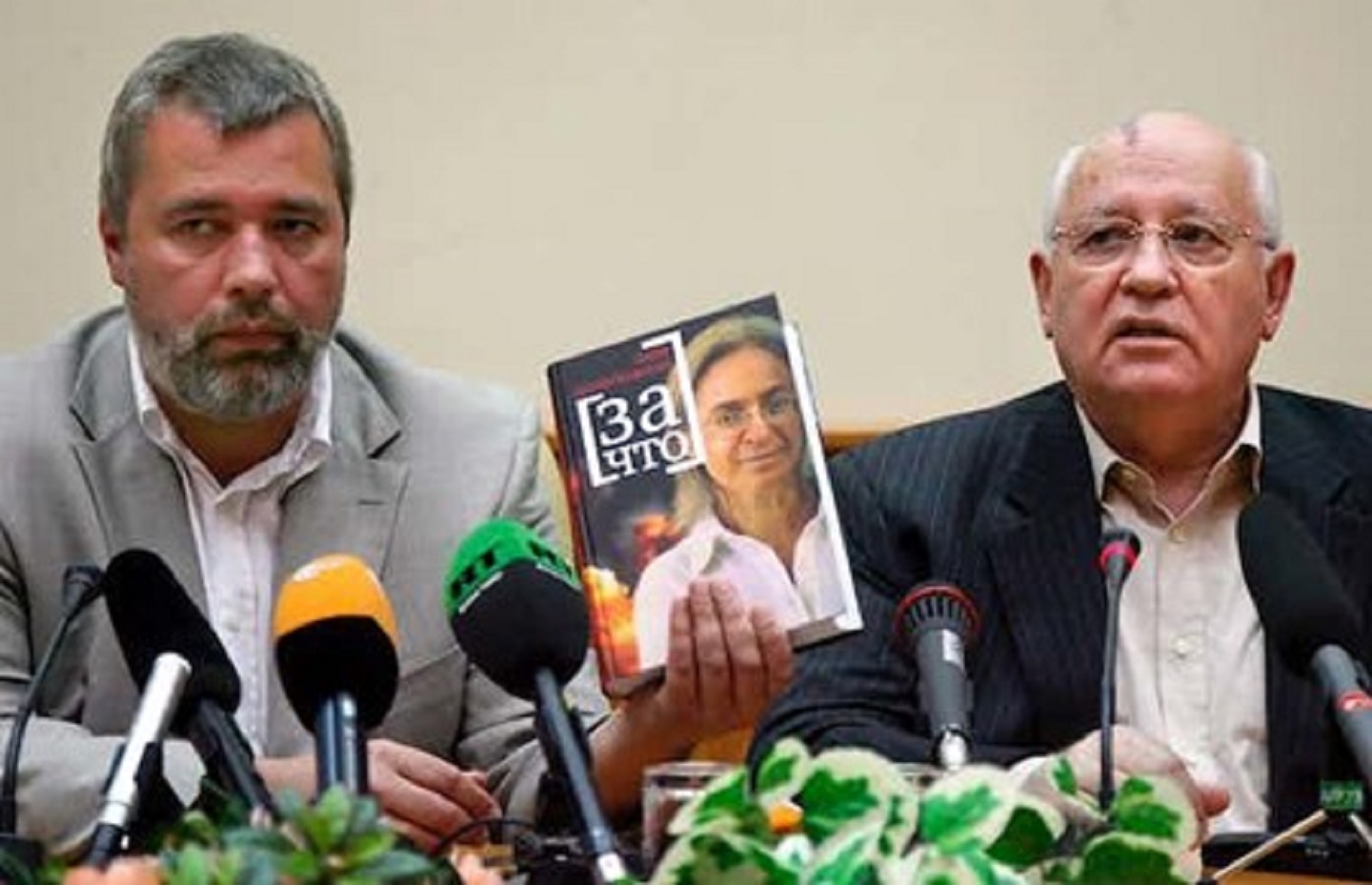 Mikhail Gorbachev in 2007 with the editor of independent Russian newspaper Novaya Gazeta, holding a book about the murdered reporter Anna Politkovskaya. EPA/Sergei Chirikov

Writing in The Conversation, Dr Jenny Mathers from the Department of International Politics discusses Mikhail Gorbachev’s time as Soviet leader and the contrast with today's Russian leadership.

Mikhail Gorbachev was only Soviet leader for a little over six years, from 1985 to 1991, but they were six years that changed both his country and the world. His policies of perestroika (reconstruction) and glasnost (openness) gave ordinary citizens the opportunity to exercise real political freedoms, including freedom of speech.

But although Gorbachev’s reforms were dramatic and far-reaching, it was never clear at the time whether they would be successful in changing the Soviet political and economic systems. Progress was often uncertain and subject to reversal. The opposition of powerful people with vested interests in maintaining the status quo was responsible for some delays. At other times the pace of progress was affected by Gorbachev’s own uncertainties about how fast and how far reform should go.

This was the case with glasnost – perhaps the most daring of all of the political changes that Gorbachev introduced. But while he spoke of the importance of trusting ordinary Soviet citizens with information, it was also clear that he intended for information to be used in a targeted way – to draw attention to specific problems identified by the political leadership. Gorbachev needed such publicity to generate the popular support that would help him overcome resistance to reform by conservatives in the communist party.

In fact glasnost failed its first test in April 1986, when the Chernobyl nuclear power station suffered a catastrophic accident. The politburo delayed authorising the Soviet news media to report the true scale of the disaster, preventing timely countermeasures such as evacuation, and exposing people in Ukraine and Belarus to high levels of radiation.

But by the summer of 1986 Gorbachev renewed his commitment to glasnost by appointing journalists who were in favour of reform to edit newspapers, magazines and literary journals. Gorbachev’s practice of appointing like-minded editors was part of what the eminent scholar of the Soviet Union, Archie Brown, describes in his book The Gorbachev Factor as “guided glasnost”, and it was accompanied by another, intersecting process that Brown terms “glasnost from below”.

For while glasnost was envisioned by Gorbachev as a tool rather than an information free for all, it quickly took on a life of its own. The very journalists who had been appointed by the state used their new positions to push the boundaries of what was possible. There was a clear steer from the Kremlin that the personalities and policies of the Brezhnev leadership of the 1970s could be criticised for creating the conditions for economic stagnation, but what about other periods of Soviet history? Could Stalin be criticised? Could Lenin? What about criticism of Gorbachev and perestroika itself?

The lack of boundaries between the permitted and the forbidden enabled editors to take chances and marked the start of investigative journalism in the Soviet Union. But the very absence of those red lines that created opportunities also meant that there was no real way for the journalists themselves to know exactly when they had crossed into the danger zone.

Everyone involved in trying to make glasnost in Soviet journalism a reality knew there was danger. When I was a student of Brown’s in the late 1980s, I was fortunate enough to hear Vitaly Korotich speak about his experiences editing the weekly magazine Ogonek. Korotich was one of those risk-taking journalists appointed by Gorbachev. The magazine soon gained a reputation for publishing criticism of the Soviet system. Korotich spoke eloquently about the risks he and other journalists took daily and remarked that he never knew if the state would praise him as a hero or arrest him as a traitor.

Public struggles over the limits of journalistic freedom paved the way for the exercise of freedom of speech by society more broadly. Films were released that dealt with controversial topics, such as Repentence, which showed some of the horrors of the repression of the Stalin period. Civil society organisations were created, such as Memorial, founded in 1987 by nuclear physicist and dissident Andrei Sakharov to lead honest investigations into the human rights abuses.

The televised debates of the newly-elected Congress of People’s Deputies in 1989 featured the open questioning of Gorbachev and other members of the Soviet leadership, especially over the war in Afghanistan. Beginning in the late 1980s there were popular protests calling for independence in Soviet republics including Lithuania and Georgia. These demonstrations were harshly repressed by the Soviet security forces, who killed many of the protesters. Even at a high point of glasnost, Gorbachev saw limits to freedom of speech, and it was the peoples of non-Russian republics who paid the price.

The trajectory of glasnost revealed a paradox: Gorbachev needed the active participation of society in politics to achieve his reforms, which meant granting certain political freedoms. But once given, political freedoms can be very difficult to control.

Vladimir Putin wasted little time in reestablishing state control over the political freedoms introduced by Gorbachev as soon as he came to power in 1999 – and reining in Russia’s flourishing independent media was high on the agenda.

Journalists’ access to Chechnya was severely restricted during Russia’s second war in that country (1999-2009), in sharp contrast to the coverage of the first war in the mid-1990s, which was extensive and uncensored.

Putin’s campaign to exert greater control over the oligarchs allowed him to deal with the media empires many of them owned. Vladimir Gusinsky lost the television channel NTV to the state-owned energy company Gazprom in 2001. In 2002 NTV cancelled one of its most popular programmes, Kukly, which was inspired by the British satirical comedy Spitting Image and which depicted Putin as a foul-mouthed baby.

Reporting the news became increasingly dangerous. The 2006 murder of investigative journalist Anna Politkovskaya was widely attributed to the Russian state.

The final blow to Russia’s independent media was the legislation passed earlier this year, making it illegal to distribute “false news” about Russia’s war in Ukraine. News outlets such as the internet TV station Dozhd, the radio station Ekho Moskvy and the newspaper Novaya Gazeta – which was founded in part by a donation from Gorbachev himself – all closed their operations in Russia.

Sadly, in the space of a generation, Russia has journeyed from state censorship to free speech and back again.