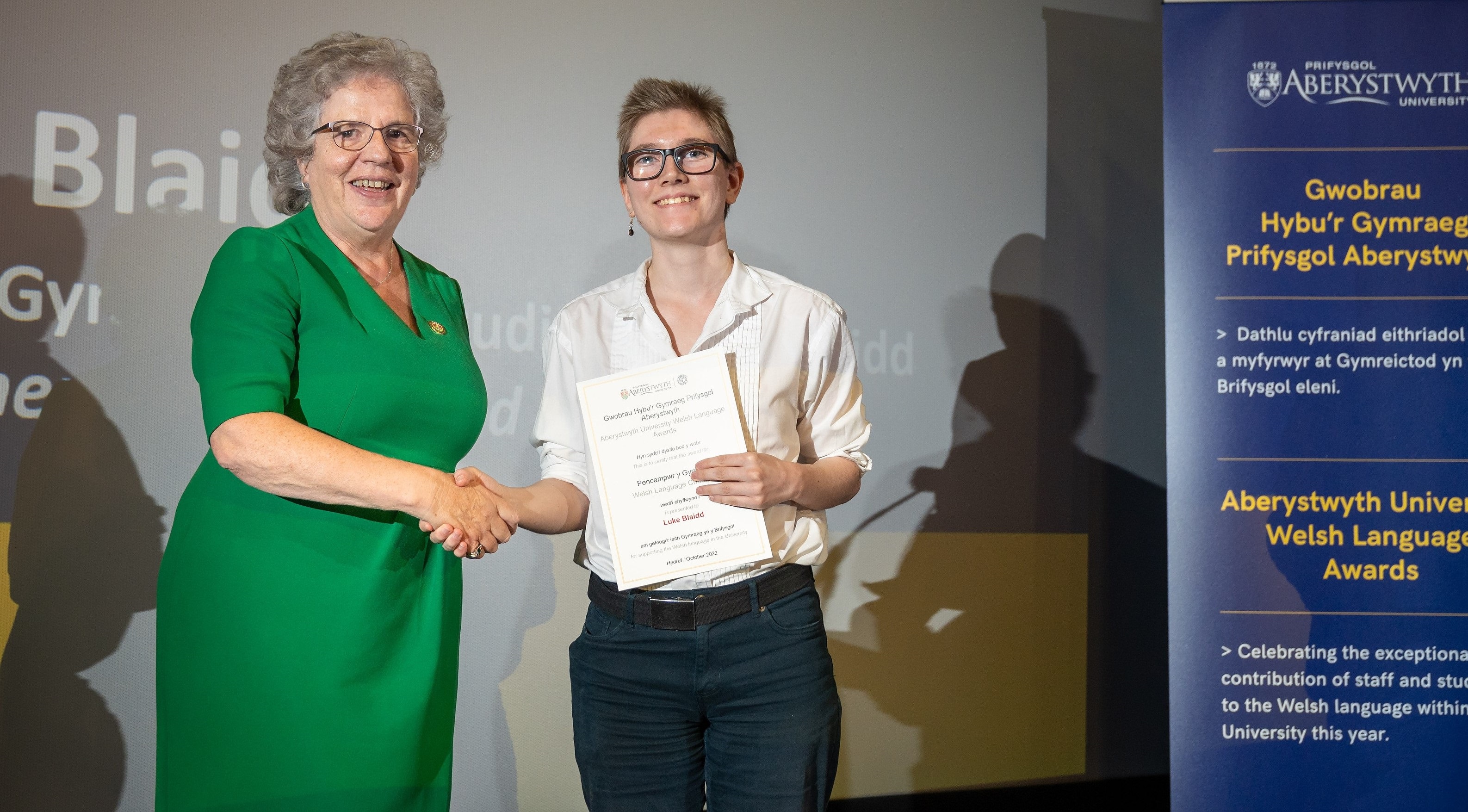 Aberystwyth University has honoured individuals for their contribution to the Welsh language.

The winners of the Aberystwyth University Welsh Language Award winners for 2022 were presented in a special ceremony on Friday 14 October, Shwmae Su'mae Day.

Four awards were presented for Exceptional Learner (Staff), Promoting Welsh in the Workplace, Studying through the medium of Welsh and Welsh Language Champion (Student).

The winners were nominated by staff and students at the University with each one receiving a personal englyn from either Professor Mererid Hopwood or Eurig Salisbury, Lecturer in Creative Writing, of the Department of Welsh and Celtic Studies at the University.

Certificates of Special Recognition were also presented during the event to students and staff at the University for their commitment to the Welsh language.

The winners of the Aberystwyth University Welsh Language Award winners for 2022 are:

The awards were presented by Professor Elizabeth Treasure, Vice-Chancellor of the University.

Congratulating the winners, Dr Rhodri Llwyd Morgan, Director of Welsh Language and External Engagement, said: "The Welsh Language Awards are an important opportunity for us to recognise the efforts of individuals in terms of their commitment to the Welsh language, its use in the workplace, in learning and study, and by being an inspiration to others.  Once again, that's what this year's winners have in common and we're very proud of what they do and the encouragement that it gives to others. I would like to congratulate this year's winners and also congratulate the individuals who have merited receiving a Certificate of Special Recognition. We appreciate everyone's contribution and are delighted that this year's Ceremony coincides with Shwmae Su'mae Day and Founders’ Day, when the University celebrates its 150th anniversary."

Dr Ben Ó Ceallaigh (Exceptional Learner): Hailing from Ros Comáin, Ireland, Ben came to Aberystwyth in September 2020 to work at Aberystwyth University as a Lecturer in the Department for Welsh and Celtic Studies. He began attending Welsh lessons including an intensive ‘Cwrs Carlam’ course and in no time at all was able to communicate with staff and students confidently in Welsh. Living in Aberystwyth, he also enjoys socialising through the medium of the language and is eager to encourage everyone who speaks Welsh to use it at every opportunity. Speaking Irish, Scottish Gaelic, Manx and Welsh, Ben is very interested in language regeneration. He completed a PhD on the subject at the University of Edinburgh and is about to publish a book entitled Neoliberalism and Language Shift: Lessons from the Republic of Ireland post-2008.

Eirian Richards (Promoting Welsh in the Workplace): Originally from Llanafan, Ceredigion, Eirian lives on a family farm near Llanddewibrefi. He has been employed as a member of staff at the University since 1997. He worked on the University farms until 2018, before being appointed as a Field Technician at Pwllpeiran Highland Research Centre. He speaks Welsh fluently and enthusiastically promotes the language, doing so in a fun and engaging manner. He teaches and encourages staff and students to use Welsh words and phrases during daily activities. Eirian believes it is vital for individuals who do not speak the language to hear it and to be aware of the life and culture of the local community.

Jasmine Mills (Studying through the medium of Welsh): Jasmine was a student in the Department of Geography and Earth Sciences, and graduated during the summer. She grew up in the Ammanford area and attended Saron primary school and Ysgol Dyffryn Aman secondary school. Although the family spoke English at home, she heard Welsh at school and in the local community and was eager to study through the medium of Welsh at university to further develop her skills and confidence in the language. During her time as a student at Aberystwyth University, she was very active in promoting the Welsh language as the Welsh Officer of the Geography Society and organised learning Welsh sessions for the Department. Welsh is very important to Jasmine, and on completion of her teacher training course in Cardiff she is keen to have a teaching career in Wales.

Luke Blaidd (Welsh Language Champion): Born in Stockport and raised in north Manchester, Luke is studying Celtic Studies at Aberystwyth University. Growing up in a non-Welsh speaking household, Luke is the first member of his family to speak the language. The Welsh language is very important to him and he is very active in promoting the language. As a trans man he was aware that there was limited LGBT vocabulary in Welsh and set about researching and searching for vocabulary in dictionaries and on the web, in order to create a terminology. His aspiration is to create LGBT terminology for everyone through the medium of Welsh. His projects also include Llyfr Enfys, which is a Dictionary of LGBT Terminology in Welsh, as well as the Amgueddfa Cymru/National Museum Wales Trawsnewid project. He also writes blogs for the LGBT+ Cymru History Group along with his personal blog based on LGBT Welsh-language topics and trans rights. He is also a leading individual in Wales for LGBT and terminology and has been listed in this year's Wales Online Pink List.