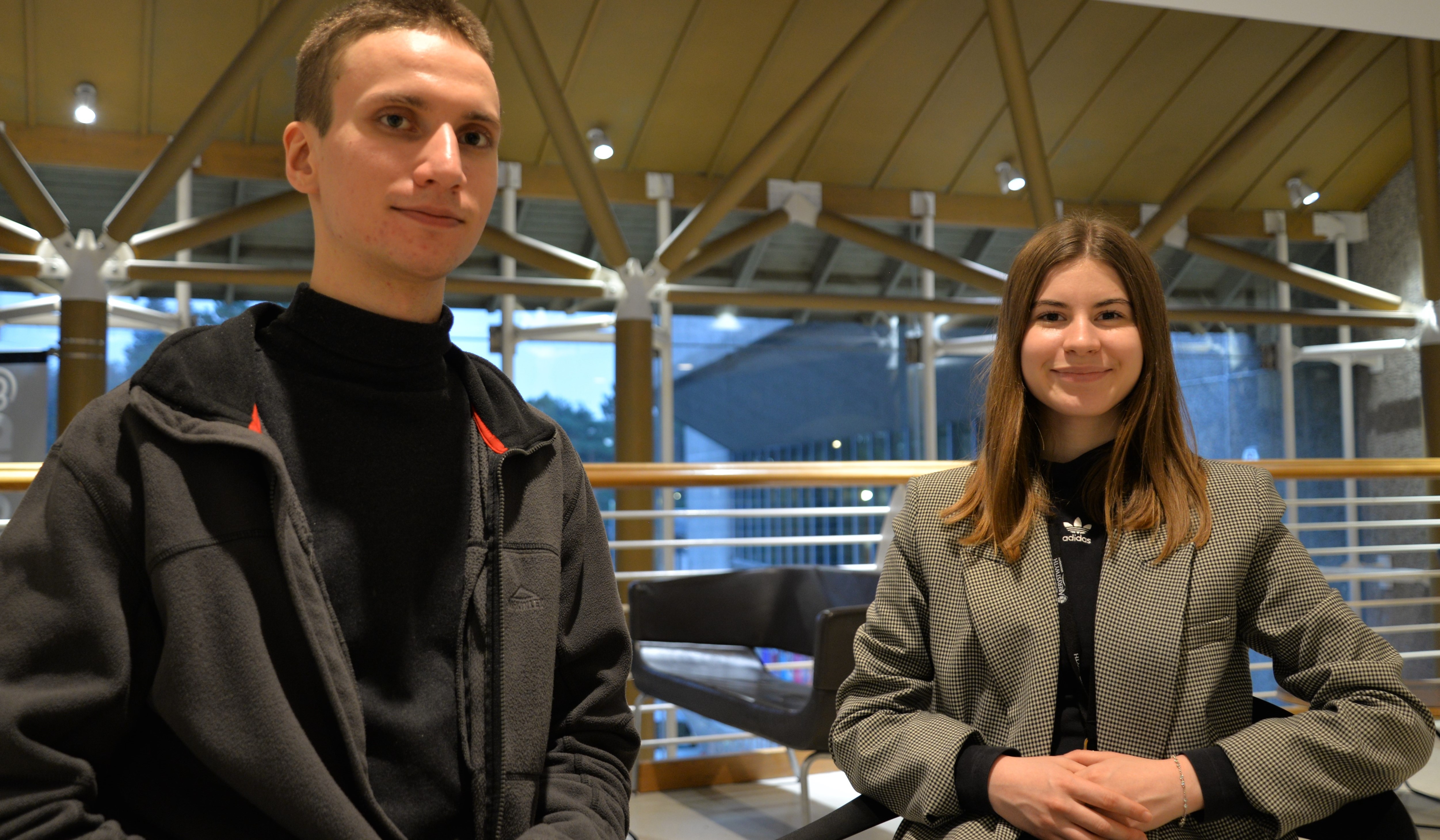 Oleksii Gorbatenko and Maryna Zaitseva who are currently studying at Aberystwyth Business School as part of a twinning arrangement with Odesa National Economic University in Ukraine.

As the war in Ukraine continues, Aberystwyth University has been building on the link established with Odesa National Economic University (ONEU) as part of a UK wide twinning initiative to support students and academic staff in the country.

A group of undergraduate and postgraduate students from Odesa joined the University’s Business School in October and in early November, the University hosted a week-long study school for students and staff from ONEU.

The Autumn School programme was developed and delivered by staff at the Business School and the International English Centre and covered the fundamentals of project management and English language skills.

During their visit they also learnt about the Welsh language and culture and met members of the University’s European Student Network.

Undergraduate students Maryna Zaitseva and Oleksii Gorbatenko arrived from Odesa in October and expect to be at Aberystwyth until the end of the first semester which runs until the end of January 2023.

Maryna is in her third year of a four-year degree at ONEU where she is studying Entrepreneurship, Trade and Stock Markets. At Aberystwyth she is studying Digital Business, Strategic Leadership and Management and Environmental Economics.

Originally from Vinnytisa in central Ukraine, Maryna had not considered studying abroad before the war, but welcomed the opportunity to leave as life there became increasingly difficult.

“Normal study in Odesa is very difficult at the moment”, said Maryna, “the electricity supply is not constant and you are always aware of the dangers from rockets landing, particularly from Russian warships in the Black Sea.”

“The welcome here at Aberystwyth has been really warm and coming here has been a great opportunity to improve my English. Aberystwyth is also beautiful, near the sea, just like Odesa, and it is great to have everything within walking distance.”

Maryna’s father is in the military as are other members of her family and many of her friends. “It is dangerous wherever you are in Ukraine at the moment and with so many people I know involved with the military, that means I am very nervous at times.”

Oleksii is in his second year at ONEU and studying Management. His choice of modules at Aberystwyth is similar to those he was supposed to study in Odesa and include Fundamentals of Management, Managerial Economics, Digital Business: Leadership and Management.”

“I decided to come to Aberystwyth to get away from the conflict but also to study abroad and this has been a great opportunity for improving my language skills and my academic work.”

“The bombing, especially of the electricity supply has worsened the situation in Odesa. I worry about my relatives and friends who stayed in the city and keep in touch with them daily when it is possible.”

In addition to Ukrainian and English, Maryna and Oleksii speak Russian and studied German at school. Both would like to return to Ukraine, but for now, they hope to be able to continue their studies away from the conflict.

“When the war started it was very difficult to make long term plans as we did not know what was going to happen”, said Maryna. “I am really grateful for this opportunity to study at Aberystwyth and now I would like to continue to study abroad for possibly two or three years more and complete a Masters’ degree before returning home.”

“Eventually I would like to return to Ukraine to help rebuild the country”, added Oleksii, “hopefully by doing something that relates to my studies. I do miss Ukraine and my friends and family there, but for the time being I am glad that I am in Aberystwyth and able to continue with my studies away from the dangers of war.”

Professor Tim Woods, Pro Vice-Chancellor for Learning, Teaching and Student Experience at Aberystwyth University said: “Our hearts go out to all those affected by the awful war in Ukraine, and we are thankful that we can play our very small part in helping students from the country. The signing of the agreement with Odesa National Economic University was an important step and an opportunity to support young people whose academic studies have been interrupted by the devastating conflict.

“It was a pleasure to finally welcome our first students in October and the group that attended the Autumn School. We hope that we can build upon these first steps and offer a partnership that makes a real difference to the University in Odesa as the nation continues to struggle with the implications of the hostilities. We look forward to strengthening educational and research developments that extend friendship and allegiance and cements the links between Wales and Ukraine.”

At the time of signing at the end of June 2022, the agreement between Aberystwyth and ONEU brought to 71 the number of partnerships between UK and Ukrainian universities launched as part of a Universities UK twinning initiative.

Established in 1921, ONEU today has 10,000 undergraduate and postgraduate students and its academic focus is on fundamental and applied research in economics.