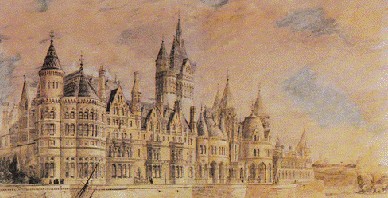 When construction work first began back in the middle of the 19th century, it was destined for life as a grand hotel on the Aberystwyth seafront. But as local author Elgan Philip Davies explains, those early plans for the building took an unexpected turn...

The Old College is a Grade 1 listed building, and was originally intended as a grand railway hotel, the Castle Hotel. It was built around Castle House which had been designed in the 1790s by John Nash for Sir Uvedale Price, a leading theorist of the picturesque movement.

Castle House was bought in 1864 by Thomas Savin, the railway entrepreneur, who commissioned the architect J.P. Seddon to transform it into a hotel, the first of a number that he intended to build along Cardigan Bay as part of the travel and tourism boom of the nineteenth century. The building was first extended to the south towards the castle and then to the north where the Quad is today. But Savin was hit badly by the Stock Exchange panic of 1865, and in an attempt to recoup some of the £80,000 he had spent on the building, he opened the hotel before it was completed. His venture failed and in 1866 he was declared bankrupt.

In 1867 the building was bought for £10,000 by the University Committee as the first home of the University of Wales, and Seddon was asked to complete as much of the building as finances allowed. The college opened on 16 October 1872 with three teaching staff and 26 students.

By 1884 the number had grown to over 100 and the first female student had been admitted. The college was growing, but during the night of 9 July 1885 a canister of oxygen exploded in the chemistry laboratory in the roof of the north wing of the building, resulting in £40,000 worth of damage. Only Castle House and the south wing, both of which Seddon had intended to replace, survived the fire.

Many thought that this would be the end of the college at Aberystwyth but the people of Wales rallied around the young institution, and a combination of small individual donations, a fundraising campaign and insurance money, enabled the college authorities to retain Seddon to restore the building. This was when the Quad was created, the Old Hall completed, and the Library built above it. It also gave Seddon an opportunity to rebuild the south wing as a science block and to place C.F. Voysey’s triptych mosaic showing technology and trade (a train and a ship) acknowledging pure learning around the tower at its end.

In 1896 John Nash’s Castle House was replaced by a four storey central block designed by C.J. Ferguson, who also designed Alexandra Hall. On the King Street side of the building the round tower match Seddon’s design, while the straight lines on the seaward side are in contrast, but complement, the original curves and bows.