By studying Welsh at Aberystwyth University you will be introduced to a fascinating variety of topics that reflect the current research interests of our lecturers. These include: the history of our literature and contemporary literature, literary theory, women and gender studies, creative writing and scriptwriting, registers and dialects of Welsh, the language in professional contexts, translation and adaptation, Welsh and the media, sociology of the Welsh language.

In addition to studying Welsh, we also offer other Celtic languages, including Irish, Scottish Gaelic, and Breton. At Aberystwyth, you will study the literature of these languages, medieval and modern, read texts in the medieval and early modern languages, and improve your conversational and written skills in the modern languages. You will also learn about the languages and cultures of the ancient Celts and how they helped to shape modern Europe. The interdisciplinary study of cultures helps us to better understand ourselves, others, and the world around us.

By choosing to study Welsh and Celtic Studies at degree level, you will develop not only your capacity to speak and use Welsh in a wide range of professional and social contexts. You will also consider the place of Welsh in the context of other languages and cultures, and enhance your abilities to speak and learn other languages. This combination is what creates the background and special dynamic for our academic and social lives, and is what makes the Department, and Aberystwyth, an ideal place to study some of Europe's oldest languages. 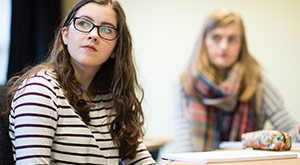 Why study Welsh and Celtic Studies at Aberystwyth University?

Employability is embedded in the Welsh and Celtic Studies curriculum that is available to our students. Through our wide range of modules, we aim to nurture the following skills:

A degree in Welsh or Celtic Studies will prove that you can express yourself in either languages effectively and purposefully, both in writing and speech, and as a result it will prepare you for a wide range of jobs.

There is a demand for young professionals who can work bilingually, and the salaries for bilingual careers are on average higher.

Following graduation, our students have gone on to pursue careers in areas as diverse as the publishing industry, tourism, trade, law, teaching, and administration. The list is infinite!

Free access to The National Library of Wales and its amazing collections of literary and audio and visual media resources.

A lively programme of Welsh events, including 'Cicio'r Bar' (Kicking the Bar) - a regular Welsh literary and musical event held at the Aberystwyth Arts Centre; 'Noson Llên a Chân' (an evening of literature and song) held yearly around Christmas time; creative writing and translation competitions and more.

All the work of the Department of Welsh and Celtic Studies is guided by research and our staff specialise in the language and literature of Wales and the other Celtic countries. We hold open research seminars every term which is an opportunity to listen to specialists in the field and to have discussions with people who are equally fascinated by the subject.

Our research spans the centuries, and includes specialist fields under three broad areas: