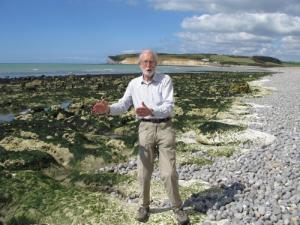 Douglas Archer graduated with a First in Zoology in 1954. He enjoyed his time at Aberystwyth, studying, playing sport and making life long friends.

He moved on to Glasgow University to do a Phd in Parasitology, however, as he often said “I did not get my Phd but I did find a wife.” He met his wife, Jean Kerr, at Church in Glasgow and they married in September 1958. After a spell working at Glaxo as a research scientist at Greenford in London, Douglas and Jean moved to West Yorkshire when he took up a post with Bradford Institute of Technology (later Bradford University) in 1959.

Douglas enjoyed teaching Biomedical sciences, and “bones to archaeologists” for years. In the 1960s he took his students on field trips to Aberystwyth and always enjoyed the annual climb up Cader Idris.

He retired from Bradford University in 1991

Douglas enjoyed singing with Keighley Vocal Union, he was Chairman of Harden Village Society, and a Governor of Beckfoot Grammar School. Douglas was also an active member of Harden Congregational Church. He was a keen ornithologist, enjoyed walking and was rarely without his lens to inspect lichen and other plant life. He continued to enjoy watching and playing sport, especially watching rugby and cricket. He played Lacrosse for Old Groveians into his mid 40s and Cricket as a wicket keeper with Harden Cricket Club in the West Bradford League into his early 50s.

Jean passed away in 1996. He is survived by his daughters Carol and Hazel.