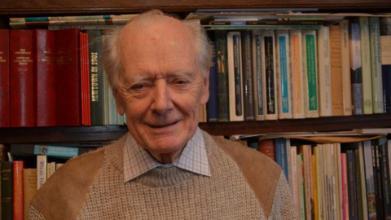 Glyn Tegai was an ascetic academic and one of Wales’s best literary critics, combining a profound knowledge of writing in the Welsh language with a keen interest in the literature of Germany and Switzerland.
Born in Chester in 1923, the son of the Reverend John Hughes, a Wesleyan minister, Glyn Tegai served four years as captain and then temporary major with the Royal Welsh Fusiliers.
After the war he attended University at Corpus Christi, Cambridge, where he was the Donaldson Scholar, took first-class honours in modern languages tripos, and was then awarded his doctorate.
Whilst at University he became involved in politics. He stood as the Liberal Party’s candidate in the West Denbigh division three times between 1950 and 1959, coming a close second each time.
In 1952 he was appointed lecturer in English literature at the University of Basel, before spending eleven years at the University of Manchester, first as lecturer in comparative literary studies and then as tutor in the faculty of arts.
In 1964 he was appointed as the first warden of Gregynog Hall, the University of Wales residential centre, where he set about reorganising its library, replanning its 750 acres, and reviving the Gregynog Press, one of the great private presses of the interwar years.
He also participated in public affairs as chairman of Undeb Cymru Fydd (1968-70) (an all-party organisation created to campaign for a Parliament for Wales), member of the Welsh Arts Council, was appointed National Governor for BBC Wales and chairman of the Broadcasting Council for Wales (1971-79), was vice president of the North Wales Arts Association (1977-94), president of the Private Libraries Association (1980-82), a member of S4C, and chairman of the Welsh Broadcasting Trust (1988-96). He was awarded an honorary fellowship of Aberystwyth University in 2000.
(*Photo credit BBC)