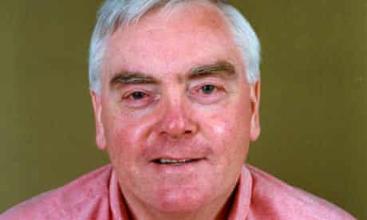 The male youth sub-culture of the seasiders at Aberaeron County School in the early fifties, at least as I saw it, was macho, pugnacious, highly audible, satirical and witty, giving prestige above all else to the feats of the playing fields.  The product of an earlier generation’s seafaring experiences maybe.  And within this group, Hywel Teifi, self-confessed specialist in the sliding tackle, seemed absolutely comfortable, among the most prominent and popular.

After losing sight of him for a few years, I encountered him next when he was a postgraduate student at Aber, still among the heroes of the football team, highly audible in the bar, but now also loquacious about the object of his research essay, the critic and poet Creuddynfab, Ceiriog’s poetic mentor, and the first paid secretary of the National Eisteddfod.

His research work on Creuddynfab gained him an MA in 1961, thus launching his career as an incomparable and pioneering interpreter of Welsh life and culture in the Victorian era. The articles and reviews began to flow. Then came the volumes, starting with his study of the National Eisteddfod, Gwyl Gwalia (1980).  Permeating his work, along with hundreds of popular lectures, was his thesis that the Treachery of the Blue Books had inflicted such a psychological wound upon the Welsh as to make their subsequent yearning to restore the nation’s respect in the eyes of the English distort the nation’s cultural and political direction for the rest of the 19th century, if not indeed until today.

An associated weakness was the failure of Welsh-language literature to give voice to the experience of the mining and industrial communities.  His interpretation of this failure is set out in his book Arwr Glew Erwau’r Glo (1994).  By initiating and editing the seven hefty volumes of Cyfres y Cymoedd (The Valleys Series 1993-2003) he endeavoured to put the record straight.

Hywel Teifi was a passionate Welsh nationalist.  So while generating his remarkable academic and popular output, he threw himself, reluctantly it may be, but nevertheless with great success, into politics, representing his adopted village, Llangennech, on Dyfed County Council and standing for Plaid Cymru in the 1983 parliamentary election. He was a conscientious and committed campaigner and his influence on the policy direction and decision-making in Dyfed was substantial.

It was to the “blessed village” (pentref gwyn) of his boyhood that Hywel’s remains returned for burial on 20 January of this year.  Many times we had heard him wax lyrical about his glorious upbringing in that village.  Lest he be accused of sentimentality though, the reader might ponder on his comments in the preface to his volume, O’r Pentre Gwyn i Gwmderi (2004) which analyses and debunks the myth of the ideal country village disseminated by Owen M Edwards and others.  He says, ”I know as well as anyone how deeply rooted such a place can be in our need’s earth”, and then, after sketching half a century’s transformation, “I dote upon my ‘blessed village’, but my dotage is not such as to believe that it could be to me a continuing city”. The reference is of course scriptural.

In addition to the above, Hywel was a schoolteacher, a lecturer in the extra-mural department and then Professor of Welsh at University College Swansea. He was Fellow of Aberystwyth University.