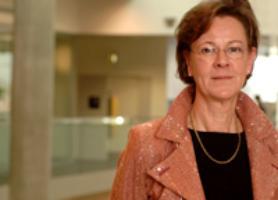 When Janet Lewis Jones was made an Honorary Fellow of Aberystwyth University in 2008, she was Vice President of the British Board of Film Classification. This was but one of the many spheres where Janet made a wonderful contribution to public life.
Janet read law at Liverpool University and was called to the bar but opted for the Civil Service (Home Office, Cabinet Secretariat, Privy Council Office).
She served on the boards of many charities including Barnardos, the Baring Foundation and the Carnegie UK Trust.
She also served on the Boards of the BBC, the British Board of Film Classification, the Postal Services Commission, the Strategic Rail Authority, British Transport Policy Authority, British Waterways and was for more than 10 years a board member of S4C, including, for a time, its Chairman.
She was advisor to the Bishops in the Lords and worked closely with Rowan Williams when he was Archbishop of Canterbury.
She moved back to Wales in 1986 when she joined the team co-ordinating the privatisation of the water industry. And then 15 years later Janet played a pivotal role in the “de-privatisation” of Welsh Water.
Janet was a remarkable person, a polymath who did and achieved so much for others, a wonderful Welsh woman, or as she would have put it herself, “a very good egg”.
(*Photo credit BBC)