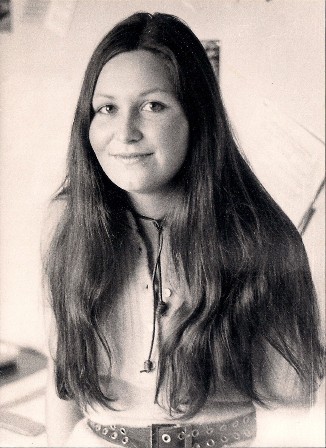 Lynne hailed from the village of Johnstown near Wrexham, North Wales.   She came to Aberystwyth in September, 1970 to study Zoology.   A beautiful and intelligent young lady she became Fresher Queen and later Rag Queen.   She was soon swept away by an old-lag Chemistry PhD student, Stan Moore.   Following receipt of her degree they both went to London, Lynne to undertake a PhD at University of London, Institute of Education, studying mothers with young children and Stan a post-doc at Imperial College.   Despite an IRA bomb going off near her flat in Chelsea, blowing out several windows, Lynne survived unhurt and, after three years, had collected enough data to start writing up her thesis in East Leake, near Nottingham where Stan had already moved to work for the Central Electricity Generating Board.

Lynne started an Initial Teacher Training course at Nottingham Trent University in September 1976.   It was at this time that the symptoms that were subsequently identified as Multiple Sclerosis appeared.   She battled through that academic year with considerable difficulty but was finally awarded Qualified Teacher Status.   She was even offered a post at the prestigious Nottingham Girls School, pending a health check, but had to turn it down as MS progressed.   Unfortunately, Lynne was too ill and preoccupied to attend to her PhD which finally gave up when her supervisor moved to America.   (However, see below).

There followed several severe bouts of MS attacks which required hospitalization and recuperation in Wrexham, with Stan travelling back and forth.   Ultimately, they moved back to Wrexham in 1979 when Stan took a post at the North East Wales Institute of Higher Education (NEWI – now Glyndwr University).   Lynne was fortunately, by now, in remission.   Two children followed, Rhys in 1981 and Elen in 1985.   Family, friends and helpers supported Lynne with the babies but she enjoyed considerable independence driving around in her yellow modified mini.   She also became a governor of the Welsh primary school and secondary school attended by Rhys and Elen, as well as becoming a member of the excellent Wrexham choir, the Sirenian Singers.   She appeared with them, on one occasion, in the Albert Hall.   In the mid-nineties Lynne started another PhD  at Manchester University and was awarded this in 1998.   (After a law degree at Trinity Hall, Cambridge, Rhys studied for MSc Econ at Aberystwyth in International Politics).

The family holidayed in France over fifteen years, usually camping/caravanning.   In September 2007 Lynne, Stan and Elen stayed with old Aber friends in Wilmington, Delaware, travelling by Greyhound bus to New York and Washington.   By now, Lynne needed more and more help and use of a wheel-chair but still summoned the courage to undertake this difficult journey.   This trip was a pinnacle in her life.   She was very proud; the rest of us stood in awe.   Her typical approach to life was – the answer is yes, what is the question?

Lynne’s health deteriorated slowly over 2008 and more rapidly in 2009 until she had to return to hospital in Llangollen on October 5th 2009.   She returned home on November 20th but she was on a slippery slope and despite the fantastic support she received from the care services and the NHS her health went rapidly from bad to worse culminating in recurring episodes of pneumonia in November/December, 2011 and her untimely death on December 31st 2011.

She leaves, Rhys and Elen and Stan and a host of friends, all of whom are devastated at her loss but who have wonderful memories of a super-star who lit-up everyone’s life and who had considerable success in life despite the handicap of MS.   It was never an excuse.