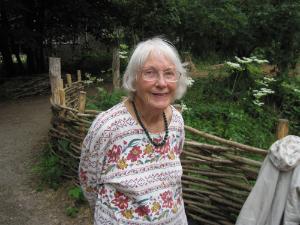 Born in Carmarthen in 1925, and growing up there and in Bridgend during the war, Marjorie Vanston (nee Lott) went up to Aber in 1943 and graduated with a double first in Latin and French in 1946. A year teaching in France followed, and then a teaching career, first in South Wales in the 1940s and 50s, where she taught French at LLwyn-y-bryn school, Swansea. Then from the early 60s until her retirement in 1986, teaching French, and also Latin and Russian, mainly at the Girls Grammar School in Dartford, Kent and Head of the French Department at Bexleyheath School.

She retired to Swansea in 1986 and enjoyed 30 years of active retirement, contributing greatly to the life of many local societies and organisations. She became an enthusiastic member of the West Glamorgan European Movement; she joined the British Federation of University Women; the Wales Assembly of Women, the Humanist Association and the Swansea Branch of Aberystwyth University Alumni. She embraced the concept of the U3A wholeheartedly and became an active member of many Groups – Welsh, Politics, Museum Research (she was the oldest volunteer at Swansea museum) – and on the Committee. She also translated some poems by Pushkin into English for the first time.

She was married in 1961 to Gerard, originally from Belgium; they were divorced in 1976. They had two children, Jem – now an author – and Rebecca.

A memorial stone to Marjorie is now at her parents’ grave in St Mary’s churchyard, Coity, Bridgend, though her ashes were scattered on the front at Aberystwyth, as she had long requested.