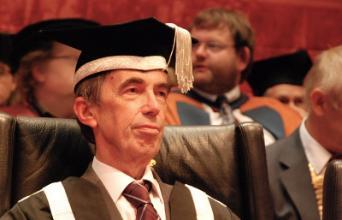 Noel was born in Llanelli, Carmarthenshire. After attending Llanelli Grammar School, where his father was a mathematics teacher, he entered Queens’ College, Cambridge in 1965 having obtained an Entrance Scholarship. On graduating, he proceeded to work for his PhD on ordinary differential equations under the supervision of Peter Swinnerton-Dyer. His PhD thesis, amongst other things, dealt with that case of Van der Pol’s equation not considered by the eminent J. E. Littlewood. In addition to numerous college prizes he received the prestigious Rayleigh Prize. He then proceeded to a Research Fellowship at St John’s College, Cambridge.

After two years in that position, he was enticed to a Lectureship in Pure Mathematics at what was then the University College of Wales, Aberystwyth which he took up on January 1st 1975. He did not really need to be persuaded, he had long expressed his wish to come to his father’s alma mater. His research work flourished in his chosen area of applied analysis. He established a strong school in that area supervising a number of good PhD students. Among numerous publications at that time was his book on Degree Theory in the Cambridge Tracts in Mathematics series; this book was particularly well received and became an established text. During the 1980’s his interests moved towards the study of Hilbert’s 16th Problem - acknowledged to be a very difficult area of research. It is internationally recognised that he and his research group were responsible for substantial developments. Their progress involved innovative use of modern computer techniques and especially computer algebra.

In the early 1980’s, he and Professor Des Evans from Cardiff University were recipients of major  Science and Engineering Research Council (SERC) grants to organise a series of major European conferences on Differential Equations at the University of Wales conference centre in Gregynog. This led to his appointment to the Mathematics Committee of SERC where his detailed knowledge and meticulous fairness came to the fore. Also, from 1986-1990, we together served as Editors of the Journal of the London Mathematical Society.

He was rapidly promoted to Senior Lecturer, Reader and then in 1986 to a Personal Chair. He was for a short time Head of the Department of Mathematics, Dean of the Faculty of Science and then Pro Vice-Chancellor, then Registrar and Secretary of the University and finally in 2004 its Vice-Chancellor. He held that position with great distinction until 2011. In 2010 he was appointed CBE for Services to Higher Education in Wales and in 2011 a Fellow of the Learned Society of Wales.

The many tributes which have appeared after his untimely death are an indication of the esteem he was held as Vice-Chancellor. He was meticulous in his preparation, quietly firm and fair. He was universally regarded as a generous and compassionate man and a person of great integrity. Above all, he was completely dedicated to his University. During his tenure as Vice-Chancellor he was Chair of Higher Education Wales and also served on many other UK university bodies. On his retirement, his talents were in great demand. He became an independent member of the Silk Commission established by the UK government to look at the future of devolution in Wales. He also served as a lay member of the Judicial Appointments Commission. For six years he was Chair of Fair Trade Wales.

Throughout his life, his religious beliefs were central to his life. He served not only his church with distinction but also his denomination and other religious causes both locally and nationally. He was a brilliant organist – as one tribute said, where else could students see their VC relaxing on a Sunday morning at the organ playing his favourite Bach.