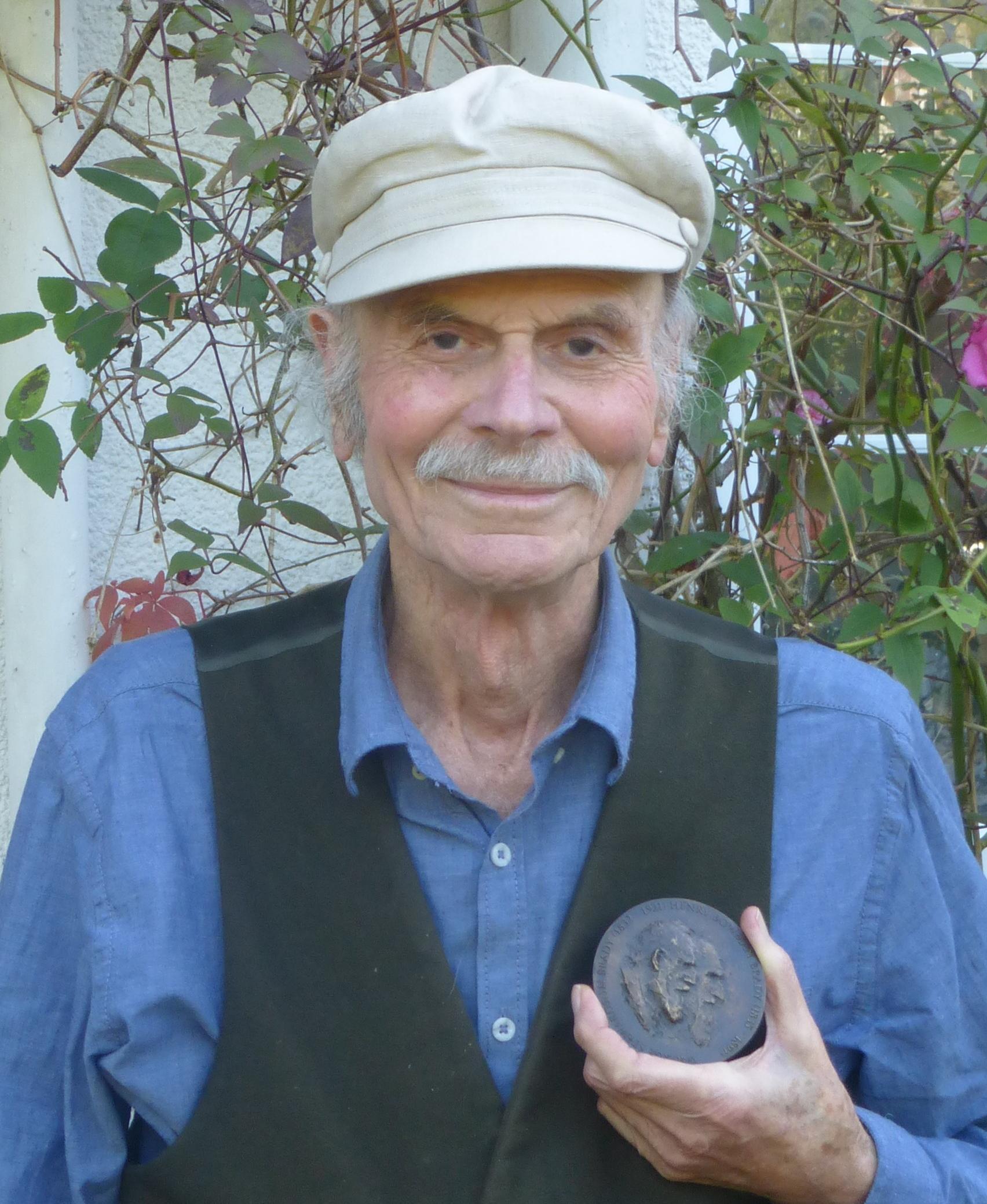 John Roland Haynes, Emeritus Professor of Micropalaeontology, was born in Aylesbury and referred to himself as a ‘child of the scarplands’, features associated with the Jurassic limestone outcrops and woodlands found along the Buckinghamshire / Northamptonshire border.

John’s childhood and adolescent years leading up to and just after the Second World War are chronicled in his fascinating autobiography Strenuous Lives.  Despite his schooling being frequently disrupted by his father’s need to find work, John developed a passion for nature, the outdoors, astronomy and geology.

He finished his school certificate at Aylesbury Grammar School and did well enough to continue to do his highers, where he came under the influence of two former Aber students, who taught him botany and geography.

In September 1947, just as he was preparing to go off to do National Service, U.C.W. Aberystwyth offered John a place to read botany with subsidiary geography and geology. His arrival at Aber coincided with that of Professor Alan Wood, the new Head of the Geology Department.

John soon switched his main course to geology, earning a 1st Class Honours degree in 1951 and accepting a doctoral research project on Early Tertiary (Palaeocene) Foraminifera from Kent.  He was awarded a PhD in 1955 and published several papers on this work.

Up until 1954, Aber geologists occupied any space available in the Theological College, including corridors and an attic.  Facilities were basic, ‘labs’ were anywhere with a sink and electrical power.  Conditions improved somewhat during the next decade when they relocated to Alexandra Road to share with Geography in the former Agriculture Department building.

When John started his research there were limited library facilities for micropalaeontologists at Aberystwyth and no inter-library loan service.

Consequently, he had to make long road or rail trips from Aberystwyth to the Natural History Museum in London to consult type collections and key references. Perhaps, these long trips to London contributed towards John’s later reluctance to leave Aber. For despite being well respected by his many contemporaries, only those who went to Aberystwyth got to know him personally, others only knew him through his publications.

After the war, Alan Wood had correctly identified that the oil industry would need micropalaeontologists, so perhaps it is no surprise that John spent the next three years employed as a micropalaeontologist with Shell Canada in Calgary, before having a short spell with Esso in Libya.

In 1959 Professor Wood enticed him back to Aberystwyth as an Assistant Lecturer with the remit of starting up a postgraduate course in micropalaeontology preparing students for work in the oil industry. The first Diploma of the University of Wales in Micropalaeontology (D.U.W) was awarded in 1960. In later years this became an MSc (alternative regulations) course.

John was promoted to Lecturer in 1960 and soon afterwards Aber acquired a boat (R.V. Antur) for offshore and marine research in Cardigan Bay.  Grab samples had to be collected within sight of land (10 miles on a good day).  Offshore sample locations were fixed by sextant, loaned by the Geography Department; in those days there was no GPS. John’s work entitled Cardigan Bay Recent Foraminifera was published in the Bulletin of the British Museum (Natural History) Zoology in 1973.

John was promoted to Senior Lecturer in 1966, about the time when the Geology Department relocated to a modern, purpose-built facility on the Penglais Campus. By this time he was already known to many colleagues as ‘Jo’.  Allegedly it was his colleague John Phillips who said “we cannot have two ‘Johns’ in the department, so you shall be called Jo”, not a name he was fond of. Aber Geology in the late ‘60s / early ‘70s was full of characters in a thriving, dynamic and socially active research community. Amongst such a group John was viewed as a gentleman with a quiet nature.

John taught Tertiary Stratigraphy to undergraduates and during undergraduate mapping excursions always emphasised the economic aspects of the rocks that the students were studying, and in his quiet way brought the history of the geological exploration of the area to life.  Whenever possible after fieldwork he enjoyed a swim in the sea.

Another major Aber project was the Mochras Borehole, drilled in the late 1960s to test Alan Wood’s theory that there would be Mesozoic sediments on the fringes of the older Lower Palaeozoic rocks which make up the Harlech Dome and Snowdonia. Initial reports of goniatites and Carboniferous strata below the Tertiary unconformity were corrected by John using Lower Jurassic foraminifera.  The ‘goniatites’ were, of course, ammonites.

John was promoted to a University readership in 1977, having been awarded his DSc the previous year.  He was promoted to a personal chair in 1983 and, when required, was always assiduous in completing administrative tasks.  Consequently, he found himself as acting head of department on two occasions (Session 1984-5 and between February to May 1986).

When the Institute of Earth Studies was formed in 1989 John was asked to take on the role of chairman of the postgraduate board.  This took up a lot of his time, until he took early retirement from full-time employment in 1993, remaining as a part-time member of staff for three more years.

In addition to teaching the Micropalaeontology MSc course over a 35 year period, John supervised more than 80 MSc dissertations and 30 MPhil / PhD students.

Throughout his time at Aber John produced a stream of publications.  Many were as the expert identifying the foraminifera as part of a group project, for example during the exploration of Cardigan Bay; helping to sort out the complex history of glacial and later deposits; and identifying Palaeogene foraminifera from Nigeria.

Probably his most important publication was his textbook Foraminifera (1981), written for the benefit of both undergraduates and postgraduates.  This was followed in 1990 by a masterly review of Loeblich and Tappan’s Foraminiferal genera and their classification, setting it in the historical context of foraminiferal studies.  His last academic publication (2013), in association with Professor Malcolm Hart of Plymouth University and others, was a history of academic research on foraminifera in the UK.

In retirement he also published Strata Florida, poems from Ceredigion, and in 2007 Strenuous Lives (the fascinating family history and autobiography that took him to the start of his undergraduate career).

In 2017 John Roland Haynes was awarded the Brady Medal by The Micropalaeontological Society, its highest award and a fitting tribute to his life of research and teaching in micropalaeontology.

Sincere condolences are extended to all John’s family who no doubt will remember his smile and love of nature.  It is to be hoped they can take some consolation from his outstanding contribution to our science and the fact that so many students benefited from his friendship and knowledge.