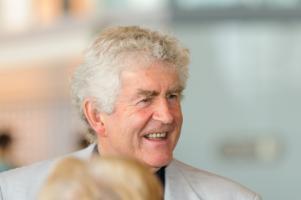 Born in Cardiff, Hywel Rhodri Morgan was the son of T J Morgan, Professor of Welsh at Swansea University, and Huana Rees (a teacher).
Rhodri attended Whitchurch High School, Cardiff, gained a degree in Philosophy, Politics and Economics (1961) at St John’s College, Oxford, followed by a master’s in Government (1963) at Harvard University.
In his early career he was a tutor for the Workers’ Educational Association (1963-65), a research officer for local and central government (1965-71), an economic adviser to the Department of Trade and Industry (1972-74), Industrial Development Officer for South Glamorgan CC (1974-80), and head of press and information for Wales for the European commission (1980-87).
Despite coming from an eminent academic family, he turned to a career in Politics by becoming MP for Cardiff West in 1987 where he remained until 2001. . The Shadow Environment Spokesman (1988-94), and also Chairman of the House of Commons Select Committee on Public Administration (1997-99).
Rhodri’s particular love was Wales, and as devolution arrived, he opted to become a member of the Welsh National Assembly. Elected as the assembly member for Cardiff West in 1999, he was promptly appointed as the Assembly Secretary for Economic Development and European affairs.
In February 2000, Rhodri became the First Secretary of the National Assembly. In May 2007, he was transformed into the first, First Minister of Wales, as the Government of Wales Act 2006 created the Welsh Assembly Government, answerable to the National Assembly for Wales. He retired as leader of the Welsh Labour Party and First minister in December 2009.
Rhodri was a regular visitor to west Wales where he and his wife Julie enjoyed spending their summer holidays on the Ceredigion coast
He was awarded several honorary degrees including becoming an Honorary Fellow of Aberystwyth University in 2009. In 2011 he was appointed Chancellor of Swansea University and held the post until his death on 17 May 2017.