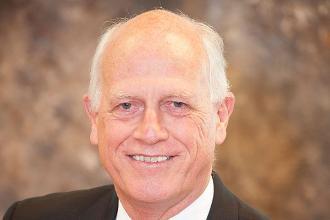 The death has occurred of Russell Trood, one of Aberystwyth University’s most distinguished former students. Russell was a leading academic in the study of International Politics in Australia, a Senator for Queensland, and a prominent figure in Australian public life. His death followed a long and brave fight against a particularly aggressive and very rare form of thyroid cancer.

It is a measure of Russell’s eminence that within 24 hours of his passing the Prime Minister of Australia, Malcolm Turnbull, issued a tribute describing Russell as ‘a good friend, a generous mentor and a wise counsel’. Turnbull went on to say that Russell had been ‘one of Australia’s finest foreign policy minds, respected and admired by all sides of politics. He [had] served Australia as a scholar, as a diplomat and as a Senator.’ The Prime Minister described Russell as ‘an optimistic, dedicated and above all unfailingly decent man. Australia’s relations with, and understanding of our neighbours in the Asia Pacific have been enhanced by Russell’s tireless efforts over many years.’

Back in his late 20s, Russell chose to give up what was a promising, and no doubt lucrative career as a Sydney lawyer, to undertake a Master’s degree in the Department of International Politics in what was then the University College of Wales Aberystwyth. Our Strategic Studies programme at that time was nearly ten years old, and a brand leader. Russell came to Aber in 1976, together with his wife Dale, convinced that politics among nations is a more fascinating subject than Law, and largely on the strength (he often said) of having read a book, Contemporary Strategy. Theories and Policies, written by three members of the Department and a former student.

Following completion of his Aber degree, Russell went to Dalhousie University in Canada, to work on a PhD exploring the controversial topic of Australia’s involvement in the Vietnam War. On its completion, he and Dale – and now baby son James – returned to Australia, first to ANU in Canberra, and then in 1991 to Griffith University in Brisbane, when daughter Phoebe also arrived.

Until 2003 Russell was Director of The Centre for the Study of Australia-Asia Relations at Griffith University. Later, following a period in the Senate, he returned to Griffith in 2015 to be Director of the Griffith Asia Institute. He became Professor Emeritus when he had to retire early as a result of his deteriorating health. The official Griffith University tribute to Russell’s years of service referred to his long and impressive teaching contribution, and it thanked him for making an ‘outstanding contribution to raising the profile of Griffith’s research expertise in Asian studies and international relations.’ In 2016 in recognition of his longstanding contribution to Australia’s international relations, the Australian Institute for International Affairs appointed Russell as a Fellow of the Institute – its highest honour.

From the time I taught him on his Aber Masters, Russell always stressed the need for Australians to see their country as part of the Asia-Pacific region, and no longer as another white outpost of the former imperial power (the UK) or as another shotgun of the US superpower. He liked to quote back to me (and his students) the observation I had offered him, following my first ride on a suburban train in Brisbane, that the profile of my fellow passengers had been markedly mixed, ethnically, and not at all like the global picture then projected by Australia’s self-image via the popular TV soap Neighbours. Russell liked my outsider’s observation because he believed always in dealing with ‘realities’ as he saw them, and for him the new Australia was primarily embedded in the networks of Asia, not those of the West.

Long having the ambition of getting into politics, Russell gained a seat as one of the Senators for Queensland in 2005. During his time in parliament, he earned the reputation for being ‘highly active’ on several parliamentary committees, notably as Chair of the Senate Committee on Foreign Affairs, Defence and Trade. Commenting on Russell’s time in the Senate, The Hon George Brandis QC, Attorney-General for Australia, said that Russell ‘brought to the Parliament an unmatched knowledge of international relations, especially of East Asian affairs. His contributions to the Senate were always erudite, deeply informed and effective.’ Brandis went on to emphasise, as did others giving tributes to Russell’s work, that he had been ‘a very collegial Senator, decent, good natured and hard working. He was the soul of courtesy. Naturally, he was hugely popular among his Coalition colleagues and well-liked and respected across the chamber.’ Brandis noted that ‘Beyond his specialist knowledge of international affairs...[Russell] made significant contributions to other policy areas, including higher education and regional affairs.’ The closing remarks of Australia’s leading law officer included the words: ‘We have all lost a valued friend and esteemed colleague. I have lost a trusted confidante and one of my closest political friends. We shall all be better for having known Russell Trood and Australia is better for his public service.’

After losing his seat in the Senate – Queensland politics are famously internecine – Julia Gillard (Australia’s Barry-born former Prime Minister) appointed Russell as the PM’s Special Envoy for Eastern Europe. This involved extensive travel among the capitals of a very loosely and extensively defined ‘Eastern Europe’, seeking to promote Australia’s ultimately successful bid for a non-permanent seat on the Security Council of the UN in New York.

Over the years, Russell Trood accumulated a variety of roles in Australian public life. In addition to his political work across Queensland (seven times larger than Great Britain, and with a population of about 4.6 million), he was a Board member of the National Library of Australia, President of the UN Association of Australia, and holder of positions in the Australian Strategic Policy Institute, the Foreign Affairs Council, the Australian –Indonesian Institute, and the Australia-America Fulbright Commission. He was a Visiting Fellow at the Lowy Institute for International Policy (a Sydney-based think-tank) and Adjunct Professor at the US Studies Centre at the University of Sydney.

All those who knew Russell attest to his strength of character and unfailing sense of fair play; all agree he was ‘a true gentleman’. Some attest to his profound impact on their lives. Among the latter, Adam Kamaradt-Scott, a former Aber PhD student and now an Associate Professor at the University of Sydney, spoke for many. Writing of his time as one of Russell’s students and political aides, Adam said ‘In his field of expertise, Russell was a force of nature’; and speaking as a member of ‘Team Trood’ in Queensland politics, he added that ‘working for Russell was simply the best job I have ever held...He was an amazing, inspiring boss.’

A packed memorial service in celebration of Russell’s life was held in Brisbane.  My tribute was read out by Professor Tim Dunne, Executive Dean at the University of Queensland and a former member of the Interpol Department here for many years.  I opened with these words: ‘As soon as I stopped regarding young Russell as one of my students, I came to regard him as one of my best friends. This lasted for four decades, despite the fact that for most of this time we were separated by half the world, and that years would pass without meeting. Russell had a genius for loyalty: for attracting it, and giving it.’

In his final months Russell found it increasingly difficult to speak – ‘not great for somebody in our profession’ he quipped in an email, at a time when he was still hoping to return to work. His condition did not stop his involvement in the things in which he was interested: he emailed me in disbelief about the collapse of the Australian rugby team against England in the summer of 2016; and in equal disbelief at what he saw as the historic blunder of the UK in voting for Brexit; above all, he warned of the dangerous risks opened up by the possibility of the election of Donald Trump in the United States. On the very day of the US election, last November, Russell sent an email saying that he was looking forward to Trump being defeated, despite the direction some polls were taking. ‘If not’, he said, ‘I guess we just turn the lights off, close the door, leave the room, and find somewhere to hide.’ [I write this, months later, as Donald Trump and Kim Jong-un wind each other up in ways that suggest that neither has any historical sense of how international relations can quickly unravel into tragedy, nor of the catastrophic nature of the weapons they are flaunting.]

Russell Trood was a builder of bridges not walls – and certainly not a proponent of the politics of the playground. At this time of blinkered nationalism and dangerous delusion in international relations, Australia and beyond have lost the sort of scholar-politician the world of politics urgently needs