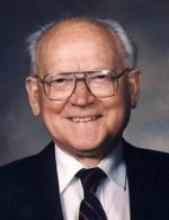 Stan passed away peacefully in his 102nd year having recently celebrated 61 years of marriage to his beloved wife, Lyndell. He was surrounded at his passing by Lyndell and their children Glenys (Chuck) and David (Trinity). Stan was pre-deceased by son, Robert, in 2011. He took great joy in his grandchildren Zoe, Evelyn, Theo, and Rhian. We feel blessed that he was here to watch them grow.

Born in Llanelli in south Wales, Stan was one of four children, all of whom lived well into their nineties. A graduate of the University of Aberystwyth in Wales in 1941, Stan began his career at the Commonwealth Mycological Institute at Kew Gardens in England. In 1952, he was invited to Ottawa to join Agriculture Canada as a research scientist. It was in Ottawa that he met Lyndell. During their courtship, Stan would drive his MG convertible to Hamilton, Ontario where Lyndell had taken up a teaching post. Eventually he would purchase cars more suited to Canadian weather, but his imported sports car with the red leather interior did the trick and Stanley Hughes and Lyndell Rutherford were married in 1958.

Stan worked with Agriculture Canada until his retirement in 1983. During his career, he achieved international recognition. In 1969 he was awarded the Jakob Eriksson Gold Medal from the Swedish Academy of Science. In 1975 Stan was President of the Mycological Society of America, and from 1971-83, Vice-President of the International Mycological Association. In 1981 he was awarded the George Lawson Medal from the Canadian Botanical Association. He was immensely proud of being named as a Foreign Member of the Linnean Society.

Stan left behind a seminal body of work in mycology, and the respect of his peers culminated in his being appointed to the Order of Canada in 2010. Stan carried his passionate interest in his field into his nineties. It pleased him greatly that his collection of mycological books, some quite rare, was accepted gratefully by the Botanical Gardens in Wales.

Stan found meaning in the beauty and order of Nature. He was a passionate collector and classifier, and an environmentalist before it became a necessity. He enriched family conversations by recalling salient Welsh proverbs and the poetry of Wordsworth and Longfellow. The world fascinated Stan, his quick wit was second to none. He was a consummate gentleman, kind father, and loving husband.