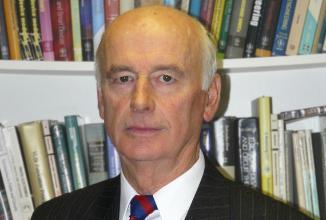 Professor Vernon Morgan who grew up in Pwll, near Llanelli, became one of Wales’ most distinguished electronic engineers and an inspiring academic. His research interests involved the physics and technology of semiconductor materials, devices and integrated circuits.
He obtained a Physics BSc and MSc from University College of Wales, Aberystwyth, a PhD at Gonville and Caius College and the Cavendish Laboratory (at the University of Cambridge), his DSc (Eng) at the University of Leeds, held a University of Wales Fellowship at the Cavendish Laboratory (1966-68), and a Harwell Fellowship (1968-70).
In 1970, Vernon joined the faculty at University of Leeds where he remained until joining Cardiff University in 1985. At Cardiff he was a distinguished research professor and the Former Head of the School of Engineering (1992-2002), building its reputation as an internationally-renowned School for the quality of its research.
His many career honours include Fellowship of the Royal Academy of Engineering (1996), Fellow and Vice President of the Institute of Physics (1992-96), Fellow of the City & Guilds Institute (1998), awarded the Papal Cross by Pope John Paul II for Distinguished Service to Higher Education (2004), Fellow of the Institution of Engineering and Technology (IET), senior member of the IEEE (USA), Cardiff Honorary Distinguished Professor (2010) and one of the first cohort of Fellows of the Learned Society of Wales (2011).
Vernon met his wife Jean whilst at Aberystwyth and became an Honorary Fellow of the University in 2006.