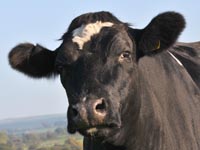 Yeasts can make the rumen environment less toxic to the bacteria

With the aim of developing firm ideas on when best to feed yeast and in what quantities, scientists are working hard to better understand the health and production benefits of feeding yeast.

Scientists were also beginning to understand why these benefits came about.

Further research was challenging because the levels of oxygen in the rumen, while being significantly reduced by feeding yeast, were still too small to be easily measured. While progress was being made, Prof Newbold and his team were also working to find out which bacteria yeast stimulates.

Using sodium bicarbonate as a buffer instead of yeast stimulated fibre-degrading bacteria, but not lactate-utilising bacteria.

Prof Newbold said the aim was to know how yeast functions in different nutritional situations. “We want to be able to say ‘You have x ration, use y grams of yeast’,” he said.
﻿
Why does yeast benefit cows?﻿