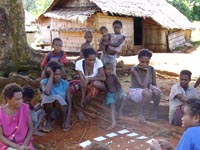 Research carried out by Dr Mike Christie, an environmental economist working at the Institute of Biological, Environmental and Rural Sciences (IBERS), Aberystwyth University, has encouraged decision makers and opinion formers to increase their effort to conserve precious natural resources.

Biodiversity is the scientific term used for the variety of life on Earth. It includes all forms of life from whales to bacteria and also includes the genetic variation and the complex ecosystems of which they are part.

Biodiversity is under threat in many areas of the world, with developing countries being the main hotspots, and concern about global biodiversity loss has emerged as a prominent and widespread public issue.

Dr Christie explains, “Some of the assessments I have recently undertaken are into the benefits of the rainforests in the Solomon Island and the coral reefs in the Caribbean. I was able to demonstrate the contribution biodiversity makes to people’s welfare and livelihoods which has in turn, motivated local policy makers to improve their conservation effort.”

On a global scale, Dr Christie was an author of the ‘Economics of Ecosystems and Biodiversity’ (TEEB) report, which assessed the costs of biodiversity loss and ecosystem degradation. The study proved to be highly influential and was instrumental in developing the Convention on Biological Diversity’s 2011 Aichi Targets*.

To help governments implement these targets, Dr Christie has been helping the UN Environment Programme run a series of high level capacity building workshops on Mainstreaming Ecosystem Service Approaches into Development. To date, these workshops have been attended by representative from over 60 countries from across Africa, Asia, Latin America and the Caribbean.

Dr Christie adds, “It is clear that biodiversity provides the foundations for the provision of many important services that we depend on, but all too often take for granted. An ecosystems approach to policy allows us to be explicit about our impact on biodiversity and how we might best benefit from it. In turn, this will help to make more informed decisions and secure the flow of important services in the future.”

His latest research is a £50k Natural Environment Research Council (NERC) -funded Valuing Nature Network project. Through this project, he will look into how to best bridge the gap between scientific evidence on the values of nature and the implementation of actual policy decisions. The first project meeting, held early this month, was attended by 60 academics and policy makers. The ultimate goal of the project is to better align the scientific understanding of biodiversity with decision making.