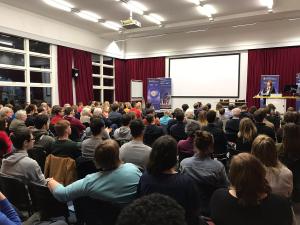 The inaugural speaker in the Department’s 2019 spring semester Centenary Speakers Series was Professor Louise Richardson, Vice-Chancellor of Oxford University and one of the world’s leading experts on counter-terrorism. Her lecture ‘A Hundred Years’ Crisis: In defence of globalism and International Relations’ proved thought-provoking and sparked a lively debate. In an era of pessimism concerning the progress made through globalising processes, her lecture called for a more positive reflection. Professor Richardson reminded the audience of the potential for globalism to improve the quality of lives around the world. She argued for the heightened value of International Relations as an academic discipline addressing topics of paramount importance in a time of disillusionment and outright suspicion towards expertise, notions of global community, and the role of international institutions.

There is a sense amongst many that globalisation- that hugely complex network of interlinked political, social, economic, and technological processes which have shrunk the world- has fulfilled its productive potential. Correspondingly globalism, the idea of the world as one community, has suffered a loss of faith. The EU faces a potentially existential crisis of populist movements, a continent-wide reaction against the supranational pooling of sovereignty in institutions of governance. Elections in democratic countries across the world have led to protectionism in apparent contradiction to a century of efforts to make the world more interconnected for the sake of peace. Professor Richardson argued against the loss of faith in globalism and charted out a renewed role for higher education. Globalisation is inevitable, she argued, and huge strides have been made in fighting poverty, disease and even mitigating international conflict. World literacy rates are at unprecedented levels. Since 1992, the world rate of poverty (defined as those earning under $2 a day) has reduced by 42%. Polio and small pox have been eradicated from almost every corner of the globe. Yet, there is widespread ignorance of these achievements. Clearly, the net gains of globalisation are not self-evident. A task for academics must be to spread the word that globalisation has progressed many causes.

Professor Richardson stressed the historical importance of international institutions in the 21st century. Despite being perceived as counter-productive by those of regionalist inclinations, international institutions are critical in addressing a raft of problems brought about through centuries of environmental abuse and ecological degradation. These problems, such as rising sea levels, soil toxicity, and climate change (amongst others), should be of as much concern as international conflict. Recalling the 100-year project since the end of WW1 to prevent another devastating international conflict, she asked; “do we need another conflict to reimplement institutions? Or can we act to prevent incoming environmental crises, rather than acting only afterwards to mitigate the consequences?” Stopping catastrophe, rather than reacting, necessitates prolonged and engaged commitment to finding solutions. Difficulties are compounded by the recent loss of faith in the value of globalism and globalisation. The gap between the richest and the poorest has increased. The interconnectedness which enabled the historic achievements of globalisation, and gave credibility to the ideals of globalism, ultimately made the world more vulnerable to financial shocks. And yet, argued the Vice-Chancellor, a new generation of institutions must be created to resolve our burning issues. There is “a necessity of mutual responsibility” in addressing the problems which every state in the world now shares. The success of the next 100 years depends on the “repudiation of insular perspectives”.

“Truth is an aspiration; not a possession”, said Professor Richardson, and must be worked towards continually. A reengagement of IR with this global wave of populism is critical. The discipline must become closer to the community, wherever that may by. Today, IR has an opportunity to teach about the advantages of globalism, and about ‘the Other’. Higher education must precipitate the

next disaster; and it is naïve to think the biggest danger we face is yet another conflict. The Vice-Chancellor concluded “the work of the International Politics Department, and of the academic community globally, has never been so important”.