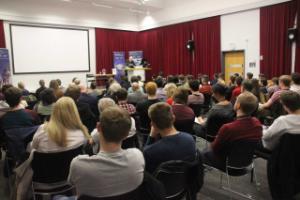 The David Davies Memorial Institute was privileged to welcome Professor Ken Booth as the guest for its 2019 annual lecture, which also featured in the Centenary Speakers Series. A central figure in the field of International Politics, Professor Booth first arrived at the International Politics Department as a student in 1961, making him its longest serving member. His lecture was titled ‘International Relations; the Future’s Inconvenient Truth’.

Ken Booth started by stating: “We are all in it together.” Part of a global community of fate, we are all children of the international, through the treaties, diplomacy, conflicts, migrations, cultural hegemonies, and languages which define and constitute our lives and very identities. This has always been the case, but is even more so today with the shrinking of the world through globalisation. The challenges we as a species now face have made this an inconvenient truth, which whether accepted or denied is nonetheless immanent. As such, Booth argued, we must get international relations right, or we cannot get much else right in the coming decades. All technological and developmental progress which is yet to be made will be less than the sum of its parts, if the same problems about how to live in harmony with each other are carried forward into the future. Our future does not lie in increasingly impressive high-performance processes and gadgets, but in transcending our human ignorance of the many latent problems in our relations. We must strive for greater harmony and solidarity not just with each other, but with the natural world on which we depend. We must get the academic discipline right; an objective we have, for Professor Booth, so far failed in.

The lecture was split into three parts. First, Professor Booth delved into the inconvenient truth of practiced international relations. The core problématique is fundamentally concerned with survival. The satisfaction of survival needs, unequal global development, the shadow of the future, international anarchy, and the human capacity for violence; these are the fundamental concerns of IR. Overcoming the problems presented by collective action is evidently a colossal challenge, in a world indoctrinated to the self-serving and individualistic virtues of competitive behaviour. Yet, as a community of fate, this challenge must be overcome. Professor Booth quoted Albert Einstein, who said that “we can't solve problems by using the same kind of thinking we used when we created them.”

The lecture then progressed to a critique of discussions about international relations put forward by various public intellectuals. The ignorance displayed of the discipline amounts to sheer foolhardiness, with implicated figures ranging from Stephen Hawking to Stephen Pinker to Martha Nussbaum. While producing innovative work which betters the lives of many people, public intellectuals often make dodgy claims when writing about IR. Putting our faith in abstract ‘progress’, is courting catastrophe. We must get the IR right, to get anything else right.

Professor Booth’s critical cross-hairs moved onto the IR discipline itself. He argued that as the discipline has expanded, the purpose has hollowed. We may now have sophisticated understandings of gender, race, and empire (the examples given by Professor Booth), but the discipline must not allow itself to be distracted from the core problématique. The question first raised in the discipline by Cynthia Enloe, ‘where are the women’, has undoubtedly given us a richer picture. But does it penetrate to the bedrock issues, issues like anarchy, or the causes of war, or existential concerns over nuclear weapons? Similarly, the IR literature concerning race and empire is crucial in making the world a better place. Inhumanity is part of humanity, and must be confronted and understood to eventually be overcome or at least mitigated. Yet, do these issues bring us closer to understanding the core problématique? The discipline must continue asking such questions, but it must also become better at not chasing after these concerns at the expense of issues relating to our survival.

The lecture finished with a classic Ken Booth question; so what? We have a choice between business as usual, or spreading a new common sense. So far, IR has failed to do this. Transformation of our world for the better means conversations across spheres and across disciplines. Transformation means consideration and deliberation of our contribution to a global civil society. Globalisation has staggering potential for improving the lives of all, but is simultaneously an inevitable catastrophe. Mere business as usual will not mitigate this. We must go beyond the community of fate by promoting a community of shared values, promoting the tribe of everywhere. We are all in it together, and we are up against the clock.

For a video of the talk, please see below: