Conference - ‘What is War Today’ 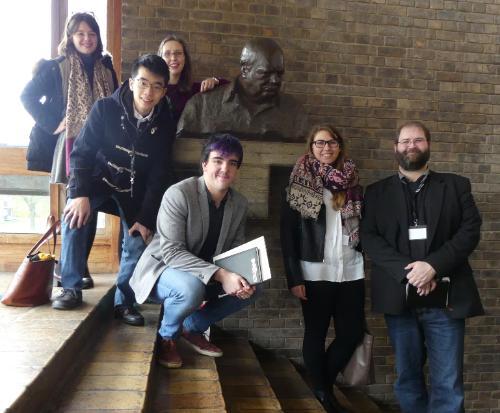 On the 22nd of November 2016, a delegation of five second-year students from the International Politics Department in Aberystwyth University attended a Symposium entitled “What is War Today?” at Churchill College, Cambridge.  Reflecting the international character of Aberystwyth Univeristy, the delegation included students from a range of backgrounds; Oliver Foley-Marshall is from Wales, Melissa Roberts comes from Shrewsbury, Jenny Birgitte Melum hales from Norway, Garance Le Vaguerèse comes from France, and Tsz Shing Chow is an exchange student from Hong Kong Baptist University. Spanning two days, the Symposium discussed important notions surrounding the nature of war; how it might be reduced in theand what shape the wars of the future will take.  These topics were discussed in a selection of different panels which were filled with a mixture of many high profile academics, politicians, policy makers and military representatives. Among others, these included Professor Ross Anderson (University of Cambridge), Rt Hon Lord Paddy Ashdown, Rear Admiral Chris Parry, Professor Caroline Kennedy-Pipe (university of Hull) and Professor Brendan Simms (University of Cambridge). These speakers covered a wide range of viewpoints, not only about war but also about their respected areas such as cybersecurity, ethics and terrorism.

The symposium’s tone was set by the opening remarks of Professor Sir Hew Strachan (University of St Andrews) and General Sir Nick Houghton, the former Chief of Defence Staff who focused on the ways conflict has shaped the past and how we might learn from this in the future.  The first panel focused on “How do we learn from the past?”, and discussions were centered around historical aspects of warfare and the reality of wars today, including the role of different and changing variables such as political situations, moral components.  Chief FCO historian, Gill Bennett challenged the notion that we cannot really learn from the past as long as we take changing realities into account when we think about the future of war. She stressed the need for developing peaceful defenses, but also acknowledged that wars have brought opportunities for new alliances and organizational reform, particularly in Intelligence. In addition, Andrew Preston analyzed the Vietnam war and notions of it being’ a different kind of war’, while relying on age old military doctrine. Rear Admiral Christopher Parry, on the other hand, recognized that we still needed to be cautious and pessimistic when thinking about the art of warfare and the lessons we gain from these experiences.

The rest of the day was devoted to more recent experiences of war. There was a general consensus on the important role of non-state actors in how war is being fought particularly concerning the nature of asymmetric warfare being wage in the global south by Western powers. For instance, Sir Malcolm Rifkind a former Chairman of the Intelligence and Security Committee  argued, ‘Terrorism is becoming a more present feature in our lives’ while the panel debated the responsibility of Western powers in developing global security and the role of   intervention in current conflicts. The panels also broadened their focus to explore the difference of ‘wars of choice’ and ‘just wars’ with a particular aim to examine the domestic and international dimensions of legal framework which exist around conflict.

The second day of the event highlighted the preparation for forms of warfare and the necessity to work toward peace building. The penultimate panel featured discussions about the potential to end conflicts. Gates Scholar, Alice Musabende highlighted the legacy of Western colonialism, particularly in Africa, on the development of warfare in the twenty first century.  She drew the audience's attention to a lack of humility of Western States and questioned whether any nation has the right to hold another’s government accountable for their actions and attitudes towards their citizens. Her arguments went on to include the importance of peacebuilding and the ongoing Westernization of diplomacy within the International sphere.

Completing the symposium was a panel which covered what preparations could be taken for the future. The panel, made up of the final five speakers, covered a variety of topics relevant to modern methods of warfare. As a panel, they explored the different spaces in which wars would be fought. Professor Caroline Kennedy-Pipe discussed the increasing importance of cyber space and the threats made by China and Russia, something, the panel agreed, was likely to continue. Professor Christine Chinkin (LSE) explained that owing to the influence of international organizations that legal frame works would play an accumulative role and she went further to re-conceptualize these elgal frameworks as a  legal space which will become a theatre of future wars. Echoing this, Dr Makram Khoury-Machool, Director of the European Centre for the Study of Extremism, similarly redefined the space and role of the media another field of future conflict

Professor Ross Anderson spoke about how modern crime is transferring to the digital world, and how the development of cyber-conflict is based less on traditional power bases and more on new technologies and training.

During the closing session of the symposium our host Director Allen Packwood of the Churchill Archives Centre invited the Aberystwyth group to give closing remarks and what we had learned.Garance Le Vaguerèse, represented the Interpol students speaking on the importance to remember that war is a real-world problem and affects people every day and as students and experts on the subject we must endeavor to remember this.

As students of international politics, this symposium was of great value, both to our studies and own intellectual interests. The Interpol Department here at Aberyswyth has given us a great opportunity to learn from world leading academics and policy makers. Discussions such as ‘How do we prepare for a new kind of war?’ have given us a new way of looking towards the future, new methods of analyzing, and new methods of presenting our findings. It has also given us a great opportunity to cultivate links within a wider academic community in Cambridge and other Universities. In fact, Allen Packwood invited us all to a high table dinner after the first day of the symposium.We were eager to represent Aberystwyth University amongst some of the world’s leading academics. We thoroughly enjoyed the experience and fruitful discussions during the dinner. Over all, the trip was a fantastic experience and has inspired us to get involved in the international community and take part in other talks and events in order to work toward peace building.