Baroness Eliza Manningham-Buller of Northampton, Director General of MI5 (2002-7) and currently Chair of Council at Imperial College London, visited Aberystwyth University on 7th November in order to deliver the Annual Lecture of the Centre for Intelligence and International Security Studies (CIISS) on the subject of 'Leadership under pressure'.  The lecture, the ninth in the series, was given to staff and students of Aberystwyth University who were joined by a number of invited guests in the Main Hall of the Department of International Politics.  During her lecture, hosted by Vice-Chancellor Professor April McMahon and University President Sir Emyr Jones-Parry, Baroness Manningham-Buller provided a personal account of the issues which faced her as the head of the UK’s Security Service and then generously answered a range of questions from the audience.

Dr R. Gerald Hughes, Director of the CIISS, commented that “We are delighted that Eliza Manningham-Buller accepted our invitation to deliver this year’s annual lecture.  It was a wonderful occasion and we are delighted that so many of our friends and colleagues from across the university could join us.  “Eliza Manningham-Buller’s lecture was the ninth in the series and, having delivered the CIISS Annual Lecture, she joins a list of luminaries that include Sir Stephen Lander, Professor Keith Jeffery, Sir Michael Quinlan, Sir David Omand, Lord (Robin) Butler, Lord (George) Robertson and Lord (Peter) Hennessy.”  The lecture was followed by a wine reception at which Baroness Manningham-Buller rubbed shoulders and chatted with the audience (especially with the many students in attendance).  Professor April McMahon commented that “The University was very pleased to welcome Baroness Manningham-Buller to the Department of International Politics.  We were extremely grateful to her for sharing her experience and knowledge on the challenges which faced her as a leader, and for such an engaging presentation.  I know that I, along with the students and staff who attended the lecture found her candid approach particularly inspiring.” 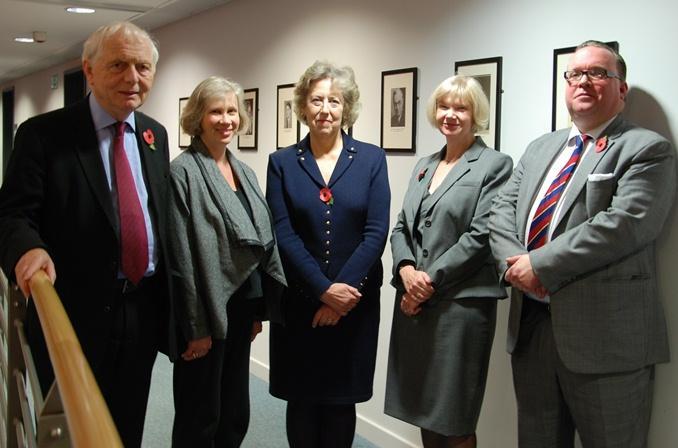