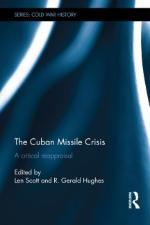 This volume brings together a collection of leading international experts to revisit and review our understanding of the Cuban Missile Crisis, via a critical reappraisal of some of the key texts.  It includes the following chapters from departmental staff:

Campbell Craig, 'Reform or revolution? Scott Sagan’s Limits of Safety and its contemporary implications'; R. Gerald Hughes, ''The Best and the Brightest': the Cuban Missile Crisis, the Kennedy administration and the lessons of history'; Sergey Radchenko, 'On hedgehogs and passions: history, hearsay, and hotchpotch in the writing of the Cuban missile crisis'; and Len Scott, ''The only thing to look forward to’s the past': reflection, revision and reinterpreting reinterpretation'. In October 1962, humankind came close to the end of its history. The risk of catastrophe is now recognised by many to have been greater than realised by protagonists at the time or scholars subsequently. The Cuban missile crisis remains one of the mostly intensely studied moments of world history. Understanding is framed and informed by Cold War historiography, political science and personal experience, written by scholars, journalists, and surviving officials. The emergence of Soviet (later Russian) and other national narratives has broadened the scope of enquiry, while scrutiny of the operational, especially military, dimensions has challenged assumptions about the risk of nuclear war. The Cuban Missile Crisis: A Critical Reappraisal brings together world leading scholars from America, Britain, France, Canada, and Russia to present critical scrutiny of authoritative accounts and to recast assumptions and interpretations. The book aims to provide an essential guide for students of the missile crisis, the diplomacy of the Cold War, and the dynamics of historical interpretation and reinterpretation. Offering original ideas and agendas, the contributors seek to provide a new understanding of the secrets and mysteries of the moment when the world went to the brink of Armageddon.

This book will be of great interest to students of the Cuban missile crisis, Cold War Studies, nuclear proliferation, international history and International Relations in general.

A Decade of Intelligence Beyond 9/11: Security, Diplomacy and Human Rights

Intelligence and National Security, the world's leading academic journal on the role of intelligence in international relations, has recently published a collection of essays based on papers presented at our bi-annual conference at the University of Wales Conference Centre at Gregynog Hall in Powys.

The Special issue (INS 27/5) features articles by four members of the CIISS:

- Len Scott, 'Reflections on the Age of Intelligence'

- R. Gerald Hughes and Kristan Stoddart, 'Hope and Fear: Intelligence and the Future of Global Security a Decade after 9/11'

- Claudia Hillebrand, 'The role of News Media in Intelligence Oversight' The events of 9/11 and subsequent acts of jihadist terrorism, together with the failures of intelligence agencies over Iraq’s Weapons of Mass Destruction, have arguably heralded a new age of intelligence. For some this takes the form of a crisis of legitimacy. For others the threat of cataclysmic terrorism involving chemical, biological, radiological or nuclear attack gives added poignancy to the academic contention that intelligence failure is inevitable. Many of the challenges facing intelligence appear to be both new and deeply worrying. In response, intelligence has clearly taken on new forms and new agendas. How these various developments are viewed depends upon the historical, normative and political frameworks in which they are analysed. This book addresses fundamental questions arising in this new age.

The central aim of the collection is to identify key issues and questions and subject them to interrogation from different methodological perspectives using internationally acclaimed experts in the field. A key focus in the collection is on British and North American perspectives. Recent trends and debates about the organisation and conduct of intelligence provide key themes for exploration. Underpinning several contributions is the recognition that intelligence faces a conflict of ideas as much as practices and threats.

This book was published as a special issue of Intelligence and National Security. 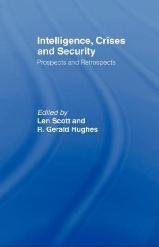 This collection of essays by leading experts seeks to explore what lessons for the exploitation and management of secret intelligence might be drawn from a variety of case studies ranging from the 1920s to the ‘War on Terror’.

Long regarded as the ‘missing dimension’ of international history and politics, public and academic interest in the role of secret intelligence has continued to grow in recent years, not least as a result of controversy surrounding the terrorist attacks on the United States on September 11 2001.

Intelligence, Crises and Security addresses a range of themes including: crisis management, covert diplomacy, intelligence trade-craft, counter-terrorism, intelligence ‘overload’, intelligence in relation to neutral states, deception, and signals intelligence. The work breaks new ground in relation to numerous key international episodes and events, not least as a result of fresh disclosures from government archives across the world. 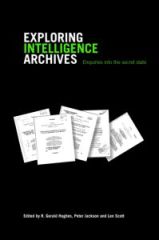 An ideal introduction to the serious study of secret intelligence and the use made of it over the last century: well-chosen case studies with key documents and stimulating commentary. Essential reading for every intelligence studies course. Professor Christopher Andrew, University of Cambridge

Click here for a review of Exploring Intelligence Archives

This edited volume brings together many of the world's leading scholars of intelligence with a number of former senior practitioners to facilitate a wide-ranging dialogue on the central challenges confronting students of intelligence.

The book presents a series of documents, nearly all of which are published here for the first time, accompanied by both overview and commentary sections. The central objectives of this collection are twofold. First, it seeks to build on existing scholarship on intelligence in deepening our understanding of its impact on a series of key events in the international history of the past century. Further, it aims to explore the different ways in which intelligence can be studied by bringing together both scholarly and practical expertise to examine a range of primary material relevant to the history of intelligence since the early twentieth century.

Understanding Intelligence in the Twenty-First Century: Journeys in Shadows 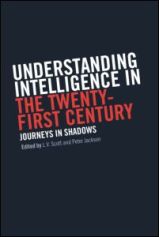 Over the past few decades, international history and security were significantly influenced by greater understanding of the role of intelligence in national security and foreign policy making. In Britain, much of the work has developed in the sub-discipline of international history with its methodological predisposition towards archive-based research. Advances in archival disclosure, accelerated by the end of the Cold War, as well as by the changing attitudes of official secrecy and the work of the intelligence services, have further facilitated research, understanding and debate. Recent controversies, including claims of politicisation of intelligence historiography, have added additional public saliency to long-standing academic disputes. The events of September 11 and their aftermath have shown the value and limits of secret intelligence and generated fresh controversies for proponents and critics.

This book examines critically the development of intelligence studies and assesses its contribution to the study of international relations. It draws upon the viewpoints of leading academics, journalists and former practitioners to explore the way the subject is studies, for what purposes and with what consequences.