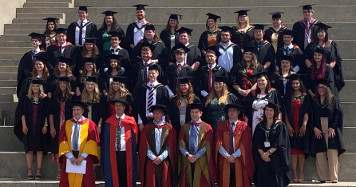 Congratulations to Mathematics students who graduated this week, in some cases after waiting for two years. Graduation ceremonies were held for graduates from 2020 and 2021, as well as this year's finalists. In the latter ceremony, an Honorary Fellowship was conferred on Jonathan Whelan, a former Mathematics student now working in IT. Recordings of the ceremonies will be available for a limited time on the university webpages.

Following the 2022 ceremony it was a pleasure to award prizes to a number of graduating students for exceptional performance in Mathematics.

The O.L. Davies Prize for Statistics, in memory of Prof. Owen Davies, Head of Statistics 1968-1975, was awarded to Charlotte Slaytor for the best performance in Statistics.

The Clive Pollard Prize for Mathematics, named for a former student who graduated in Pure Mathematics in 1972, was awarded to Hywel Normington for his part 2 performance in Mathematics

Christian Chelland and Samuel Grundy-Tenn also receive prizes from the Institute of Mathematics and its Applications (IMA) for the best overall performance.

Prizes have also been awarded to non-finalists; we will congratulate these students in person when they return in September.